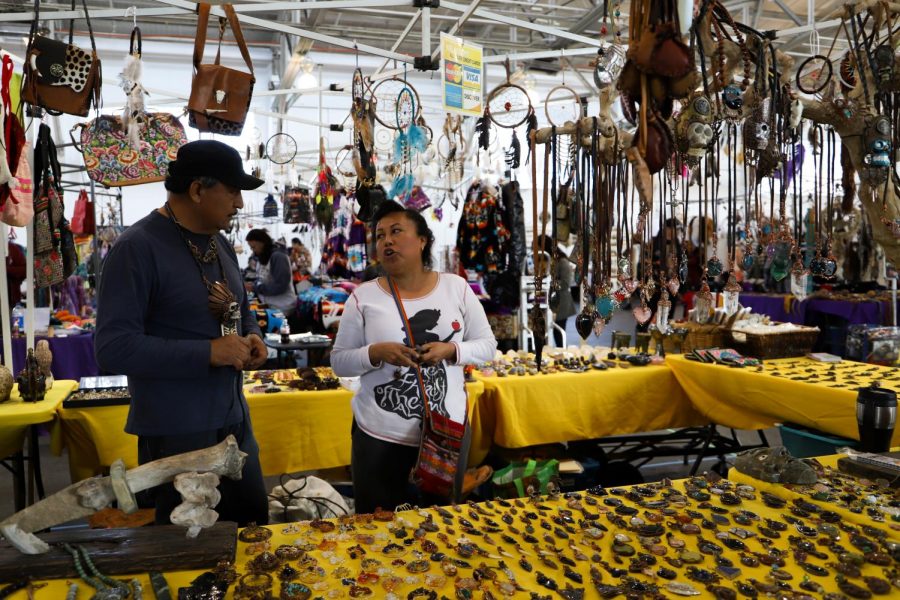 Jingles from dancers’ regalia resonate around the crowd. Their beaded clothing makes a distinct noise as each performer moves. Colorful beads move in time with the music, twisting and turning with each step made. Songs are sung in Native tongues as the dancers prance and twist their bodies in ceremonial dance.

The ninth Bay Area American Indian Two-Spirit (BAAITS) Powwow, held Saturday Feb. 8th. Two-Spirit is an umbrella term for all Indigenous people to use when referring to those who identify with having two spirits in one body. The celebration has become a welcoming environment for those in the LGBTQ+ communities.

“There are a lot of powwows that happen all over the world but a lot of them aren’t inclusive to the LGBTQ+ community, including the Two-Spirit community,” said Riley Dunkle, an SF State student volunteering at the powwow. “So it’s really important for them to have spaces where they feel comfortable to express their identities and be who they are.”

According to the BAAITS Facebook page, their Two-Spirit powwow embraces Indigenous traditions while also incorporating a “uniquely San Francisco experience” by embracing all genders, sexualities, etc. The powwow is a special way for Indigenous people to come together and celebrate various Indigenous cultures.

“Queer history itself tends to be whitewashed; it doesn’t just start with the Stonewall Riots, it has been here for hundreds and thousands of years with the Two-Spirit people,” said Omar Panjwani, a Two-Spirit dancer traveling from Vancouver. “No matter how colonized [the land] is, you cannot deny the history that it is on stolen land.”

The smell of burning sage filled the Fort Mason Festival Center, which contains a large hangar for powwow activities and vendor booths. Colorful beaded jewelry and custom-made pieces of silver and turquoise shone from the rays of sunlight coming through the windows of the center.

“It’s important to have a Two-Spirit powwow because it shows further our inclusivity to everyone in the Native community and especially in San Francisco. It suits the city so well, just shows how we respect people from all backgrounds, all genders, sexualities,” said Poppy Gallegos-Zingarelli, a Diné (Navajo) citizen living in the Bay Area. “It’s always important to invite everyone to show what the Native American culture have to offer and how it can provide so much for people who aren’t of that ethnicity and people who are.”

The area outside is where powwow attendees gathered and at different Indigenous snack foods, such as frybread. The sight of fry bread–airy, soft and buttery–draws attention with it’s golden-brown color, sometimes topped with ground meat, chili, jalapenos and more.

“You get that exposure and inclusion out into the community; [celebrating Two-Spirits] is just something that happened way back when before colonization and it should be brought back to now,” said Cheyenne Garcia, from the Cheyenne River Sioux Tribe and SF State student who danced at the powwow. “And with powwows, in general, it’s a way for the community to come together; today’s been a really beautiful day. . . don’t expect anything, just come open.”