Baseball season is officially underway, and it did not take long for San Francisco State to get off to a hot start. The Gators had their first home series of the season and won all four games against the visiting Simpson Red Hawks. Beginning on Friday, Feb. 7, the two teams played four times and the San Francisco offense got to Simpson quickly and often, outscoring their opponent 41-10. 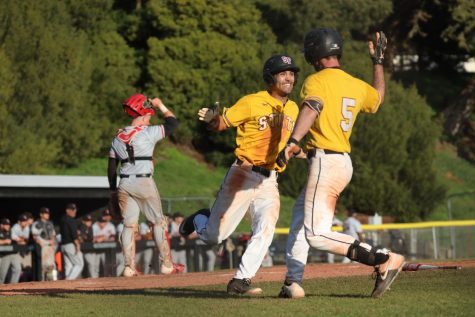 The Gators dominated their home opener winning 7-1 on Friday. Simpson got on the board in the first inning, but San Francisco would answer immediately. Junior first baseman Trevor Rogers quickly got SF State on the board with an RBI single that senior Jonah Gonzalez scored on.

The offense didn’t stop there for the home team. They put up two more runs in the second inning and would lead for pretty much the rest of the weekend. Although the offense made some noise, the pitching held up their end of the bargain as well. Pitcher Jack Higgins struck out a whopping 10 batters in six innings while only giving up three hits in what would be a dominating first outing for the senior.

It was a statement San Francisco was looking to make right of the bat.

“This start to the season is great for the team,” freshman outfielder Nick Upstill told the Golden Gate Xpress. “These first four games showed people who watch Gator baseball that we have the grit and the depth to be a top contender this year.”

It is momentum San Francisco would ride for the rest of the weekend. The two teams would play in a double header on Saturday afternoon and the Gators took care of business in both games.

The first game saw the Red Hawks be down 5-0 by the time the fourth inning was over. While the Gators offense woke up ready Saturday morning, it was the pitching that controlled the game. Jordyn Eglite would start the game and throw six and one third inning of one-hit ball. Junior southpaw, Mike Manley, threw two scoreless innings and Jack Reitsma would come into close out the ninth.

Game two of the double header that wound up holding most of the excitement. A very back and forth game that would result in San Francisco coming from behind to win the game. The Gators were down to their final out until Jonah Gonzalez, who hit .467 with a homerun and three triples on the weekend, hit a game tying double in the bottom of the seventh. This would allow Upstill to save the day and walk it off with a single to score Gonzalez. 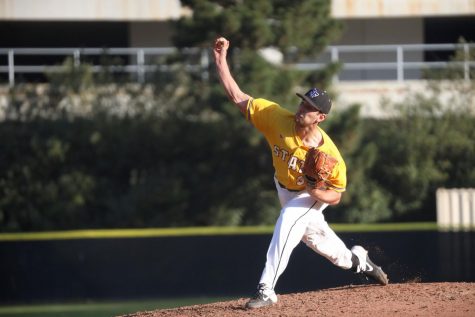 “I told myself before stepping in the box that losing this game isn’t an option,” Upstill said. “I saw a pitch I could drive in the outfield and just went with it and trusted my abilities.”

Upstill noted that there were a lot of other components that led to their victory other than his walk-off hit. Stating that it was a ‘team win’ with the pitching staff keeping them in it and clutch offense late in the game.

San Francisco would build off their first three wins and sweep the series in a game that was all Gator on Sunday. Their bats came alive once again and put up all eighteen runs between the second and sixth inning. Gonzalez would put up seven RBI’s, including one three run homerun. An opening series win is a big push for a team that is hoping to make a deep playoff run this year.

“The wins this week feel great, but we still have business to take care of,” Upstill said. “It’s a long season and we’re excited for what’s in store for us.”

San Francisco will look to capitalize off a hot start to the season when they travel up to Sonoma State to take on the Seawolves on the afternoon of Tuesday, Feb 11. The Gators will then travel up to Chico State for their first conference series of the season.