Love is war at The Great Pillow Fight 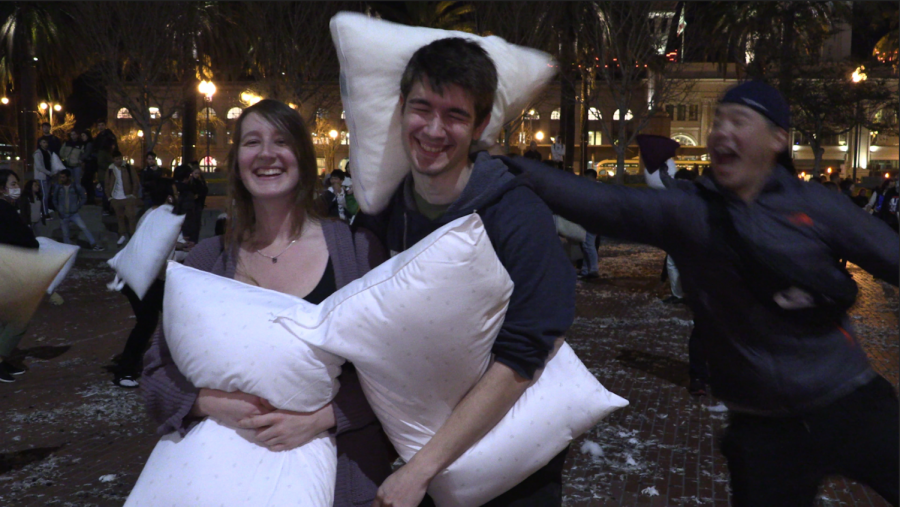 Most couples on Valentine’s Day make candle lit dinner reservations and buy chocolate for each other, but San Francisco has an alternative date night.

The Great San Francisco Pillow fight is an alternative option for couples to have a night of  hitting each other with pillows for fun. Not just couples, but also people of all ages participated in the event at Justin Herman Plaza. The Great Pillow Fight has been going on for over a decade and people come from all over the Bay to join.

SF State student Marylee Humke was at the The Great Pillow Flight with her partner Piotr Sikorski. The couple wanted to try something different for their Valentine’s Day.

Humke describes herself as a shy girl, so hitting people in the face with pillows isn’t necessarily something she would normally do.

“I think it would be a great way for singles to come, like any pent up anger they have about being single and then couples like smacking each other around, you know, safely,” Humke said.

Noah Reson-Brown has been a pillow fighter for over a decade and says there is no official coordinator anymore. Reson-Brown was dressed like a knight and ready for battle. Even though there is no order in this event, the pillow fight anarchy never fails to miss a year.

“So at this point, no, there is no organizer. Everybody knows Valentine’s day you come out here and you do the most romantic thing in the world,” Reson-Brown said.

When approaching another pillow fighter, it could be intimidating to just hit someone especially if they’re ten years old.

“On the field of honor on the field of pillows, whatever, but it’s honestly more of a bonding experience than anything else,” Reson-Brown.

“It kind of came from my 2020 costume for the new year and then I’m all about getting up the vote and like everyone should vote,” Lamb said.

His embroidered pillow had the word “Love” in pink and said that he asks people if they need some love in their life instead of just going for the hit. Lamb gives some perspective and answers the question of why a pillow fight on Valentine’s Day.

“I think it’s kind of from the cacophony side, you know, it’s part of the cacophony society”, Lamb said. “Which is a society of pranksters that goes back a long way. And they’ve come up with different events like you know, the center key, which kind of ran its course, Santa con.”

Nonetheless, people continue to keep the tradition alive and take one day out of the year to have an old fashion pillow fight.