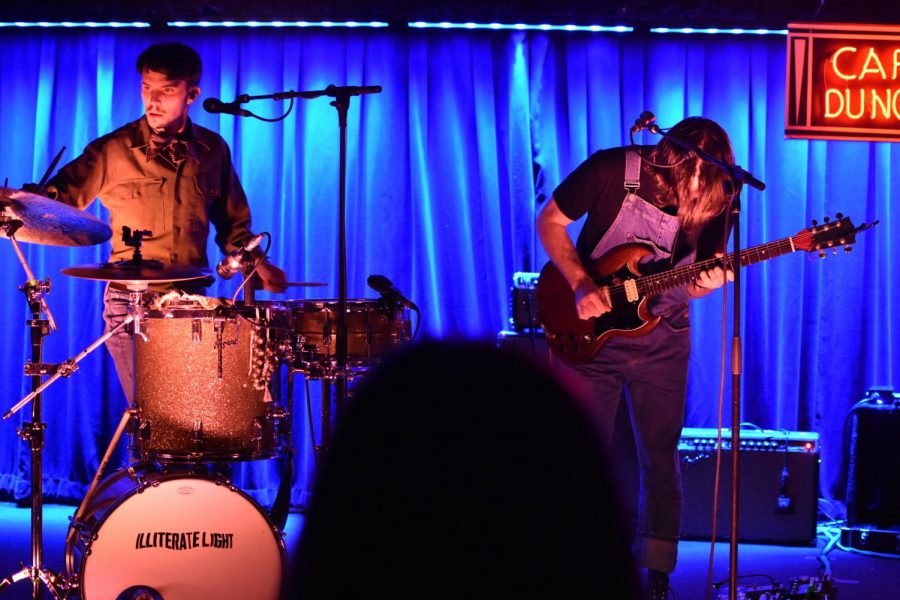 A small line formed outside Café Du Nord as IDs were checked to enter the venue. The patrons quietly clamored at the bottom of the steps leading into the café, located under the Swedish American Hall on Market St.

Shane T, the opener for Illiterate Light, began to strum on his electric guitar as the sound operators fixed issues with the speaker system. The crowd sat at the tables lining the rear of the one-room bar, with the stage offset to the left. Sound boards sat on illuminated stands and acted as a divider between the stage and bar space.

As the opener began his set, people sitting in the back moved to fill in the space in front of the stage, drinks in hand. People remaining in the back, filling the rear of the bar with a warm buzz, complemented by dim lights and a performance that is increasing in volume.

Jake Cochran and Jeff Gorman created the two-person band following their departure from a previous band the two were in together, called Money Can’t Be Eaten. Gorman, the lead singer, was no stranger to the rock-and-roll lifestyle. His uncle, Steve Gorman, is a member of the Black Crowes, which formed in 1984. Steve is still a member of the band, with his nephew now following in his footsteps.

The duo originated in Virginia, where the two met while working on an organic farm in the Shenandoah Valley. In their early days, they carried their instruments on their backs as they traveled on bicycles to each performance. Now signed by Atlantic records, the duo is touring North America to perform songs from their debut self-titled album Illiterate Light.

Their first time in San Francisco, Cochran and Gorman began the delayed set with an energetic opening number. The lights faded away as colored LED lights illuminated the stage behind the duo. The set continued, with some of the crowd headbanging, while others stand still with a drink in-hand and observe the passionate and melodious movements of the duo on stage.

After four songs, the lights came back up as Cochran and Gorman moved closer to each other. The duo switched out their electric guitars for acoustic and began to speak to the crowd.

“What we’re trying to figure out right now,” Jack began, “is how to have all you beautiful people actually provide the electricity to power our rock show.” The singer then describes a technology service called Rock the Bike, an Oakland-based startup that is beginning development of bike-powered generators. Illiterate Light will begin to work with the company in the near future to provide bikes at their performances, where a few fans will be able to sit and pedal in order to generate power for the stage and lighting.

After cheering from the crowd, the band begins to play a new acoustic song from the album, called “Sometimes Love Takes So Long”, dedicated to Neil Young, an inspiration of the duo.

Spectating the entire event from the back of the crowd is Jolo Merilleno, an SF State student majoring in business marketing. Jolo works as a campus representative for In2une Music, a music label that offers positions for marketing smaller bands and artists.

“I’m just the biggest music fan,” he shares. “I get to discover new artists every day and this [position] has really helped me share my love of music.”

Jolo got his position with In2une in 2017 after his friend who attended USF graduated and recommended he apply for the position at SF State.

“I love getting to think critically and being introduced to the business aspect of music,” he says.

Jolo attends events like Illiterate Light to observe the audience interactions and attention to the artists. Then he creates reports of where the band or performer may need marketing assistance to create a better turnout.

He shares that he would love to be the artist that his team markets one day. But for now, he hopes to just get his foot in the door.

As Illuminate Light closes their set, the audience starts to walk back up the stairs to Market St. The bartender collects empty cups and beer pitchers using the light on his iPhone, and the band makes their way off stage.