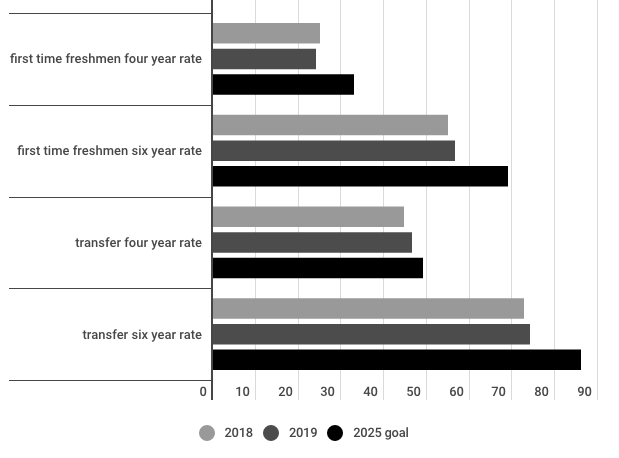 As graduation approaches in May, it’s important to note that only 24.1% of 2019 graduates that started at SF State as freshmen finished in four years. These low graduation rates are consistent across the entire CSU system, and the school created a six step student success plan as a means of getting more people to graduate within four years.

The CSU system launched Graduation Initiative 2025 back in 2016 as an effort to try to raise these rates across all 23 of its universities. Since then, SF State’s four year graduation rate for first time freshmen has gone up 2.5% and the two year rate for transfer students has gone up 7.5%.

According to the student success plan, 41% of students that took the senior exit survey in 2016 said they were not graduating in the time they expected. 46% of those students said that the reason for the delay was inability to enroll in classes they needed.

Brian Mineart, a mechanical engineering senior, says that he’s had to take 16 or more units for four semesters, including his final semester, in order to graduate in four years. He says he is currently taking an engineering class meant for second year students because he was unable to add it before due to conflicts with other engineering classes and not having priority enrollment.

In the same exit survey, lack of good advising was the second most frequent answer when asked what was the one change they would make to improve their overall experience at the school.

In order to address the issues with advising, the school is hiring new advisors in the Undergraduate Advising Center, as well as the college resource centers.

The advising center has received funding to hire 10 new advisors next year, on top of the 20 that have been hired in recent years, according to Kim Altura, the associate dean of undergraduate education. The plan is to assign an advisor to all incoming freshmen in order to increase the school’s retention rates among first year students and start them on a direct path to graduation.

“Advising is great, but the advisor can’t materialize a class if it doesn’t exist,” said Altura. “So there’s a big push to make sure that we have enough classes.”

The student success plan also notes that 34% of first time freshmen leave the school before their junior year, which the university says is primarily caused by lack of engagement, both socially and academically. In order to fix this, they plan to hire faculty to increase student involvement, mentor students, improve mental health among students, and teach classes targeted towards freshmen.

Samantha Covington, a freshman criminal justice major, said that she had difficulty getting classes alone, but when she went to the advising center for help, she was able to find the classes she needed.

“For my minor, I had difficulty getting one of the last classes that I needed for graduation,” said Jalen Coleman, a senior majoring in sociology. “There were already limited classes that were available to take for the spring semester, but for some reason none of those limited classes were being taught this semester, and it was very frustrating because this is my last semester.”

Coleman said that he didn’t utilize his advisor until the end of his junior year, but he found the roadmap on SF State’s website to be more useful than his advisor.