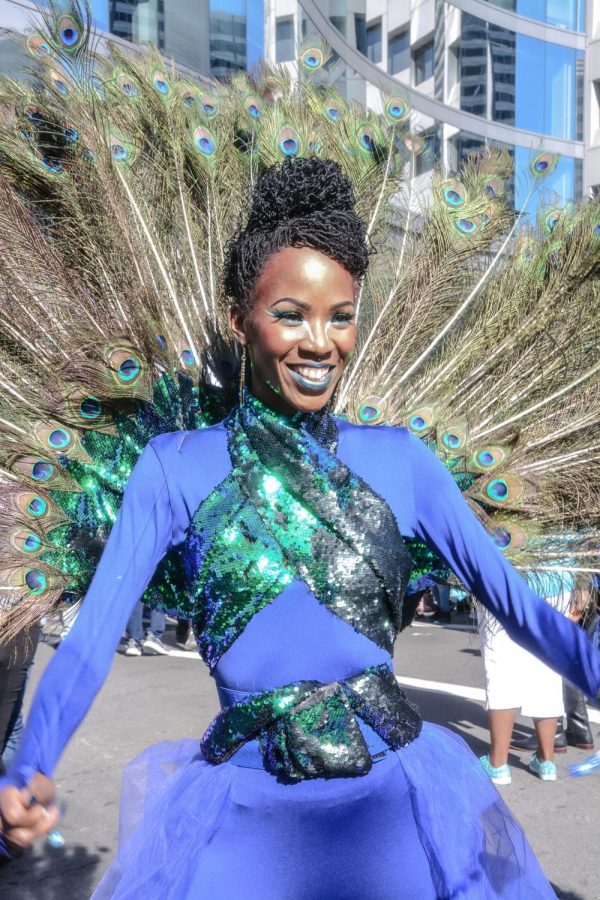 “Black joy means to me resistance, reclaiming. It means unity; it means heartfelt connections. And it means home.”

“The curation has been a nice experience where I’ve learned all the inner workings and all the things that it takes to put on the actual show,” she said. “The importance of having events like this, to me, is really just making space and taking time for folks to get together and network.”

Founded by Alisha Greenwell and Amber Lester, the parade grew exponentially these past few years. Black families and businesses, fraternities and sororities, religious groups and community organizations, drill teams and breakers all participated in their own ways.

Rosemary Towns, a member of the Xi Gamma Omega chapter of the Alpha Kappa Alpha Sorority, the first black sorority founded at Howard University, graduated from SF State in 1955. Since her school did not have a chapter, Towns would head across the bay to UC Berkeley.

“Because there were so few of us at that time, we would have to travel to get the community all together,” she said. “So we knew people all over the Bay Area.”

What tied these different groups together was a profound appreciation for Black experience and excellence, as well as the great music bumping and the delicious food all around.

Co-founder of the breaking group Oakland Originalz, Gideon Chiwinke Mekwunye II, was born and raised in Oakland. He and his breaking crew represent Oakland culture around the world.

“So when you break, you emulate your environment,” he said. “I feel like when you’re Black you can be really bitter. So there’s one thing to let it go but there’s also another thing to let it grow.”

Oakland Originalz focuses on creating very positive performances that challenge the common culture of breaking. As they spun through the air and contorted their bodies, they called for the audience to stay in school and appreciate the people around them.

Rochelle Westbrook led the Hundreds Unit women’s dance group as their mascot and choreographer. The group won the “Best in Flow” award at last year’s parade and showed up in force with an “African Jungle” theme for this year.

As their mascot, Westbrooks literally shone under the warm Oakland sun with a sequined peacock costume, complete with a huge feather tail. She said the whole ensemble took a full 10 hours.

“Representation matters. So our children get to see business owners in the community,” she said. “We expose and expand and grow as a community of people but also leaders, as we’ve been throughout history.”