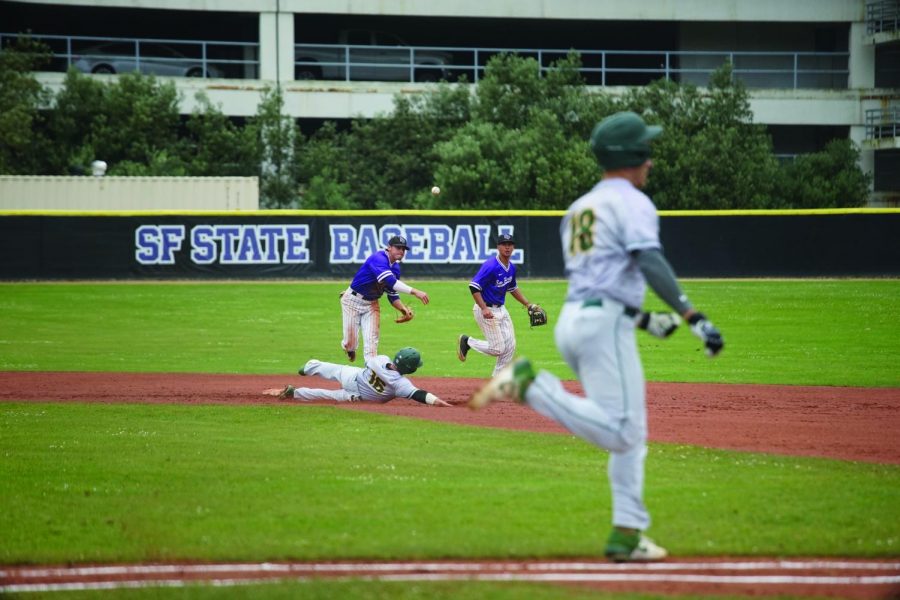 After losing the series against top team UC San Diego last weekend, SF State’s baseball team bounced back this past weekend by splitting their season against Cal Poly Pomona, last season’s California Collegiate Athletic Association champion. This series allowed the Gators to remain in fourth place of the CCAA as they continue their march back to the playoffs. The team was also ranked ninth in the National Collegiate Baseball Writers Associations West rankings.

In what has been a reoccurring thing for the Gators, SF State won in extra innings on Friday afternoon. Senior center fielder, Jonah Gonzales, came through in the clutch multiple times to help the Gators take the series opener 5-4. First, in the 14th inning, Gonzales singled in freshman Kayleb Becerra to push the game to the 15th. Gonzales wasn’t finished there, hitting a two out walkoff single in the 15th inning to end the game. Head Coach Tony Schifano recognized what Gonzales brings to the lineup every game.

“Jonah is a special talent,” Schifano said. “He possesses all 5 tools that scouts and coaches look for in players. He runs very well, hits for power, hits for average, plays defense and has a strong arm. He brings energy everyday to our lineup, dugout and team. No matter what Jonah is going to compete, play hard and bring a relentless mindset to the field. I am very proud of the person and player Jonah has become this season.”

Jack Higgins continued his solid season on the mound on Friday. The senior threw six innings and only allowed two runs but didn’t receive the win due to the game going into extra innings. Despite getting off to a good start, it was all Pomona on Saturday as they took the second game 7-3. Junior first baseman Trevor Rogers had a strong showing at the plate, putting up his first career four hit game, but the Broncos bullpen shut the door on the Gators by throwing four innings of three-hit baseball.

Cal Poly Pomona took game one of the doubleheader on Sunday 6-1 but SF State rebounded with a 4-1 victory in the second game. Sophomore Tyler Franks had his best start of the season in game four. The right-hander threw four innings while only allowing three hits as he struck out and walked one batter apiece. Although the goal is to win every series, Schifano was pleased with his teams effort to close out the series.

“Getting the series split in Game four was important. Of course, your goal is to win the series coming into the weekend, but we competed and found ourselves down two games to one going into Game four on Sunday. We got a tremendous effort on the mound from starter Tyler Franks and some key RBI’s from Trevor Rogers, Kody Gardner and Matt Sugden. And our bullpen closed it out. It showed a lot of character, finding a way to win Game 4 and split the series against a nationally ranked opponent.”

Although a series split isn’t a desired outcome every weekend, it was the team’s attitude throughout the weekend that stood out to Coach Schifano; especially against a formidable opponent such as Cal Poly Pomona. 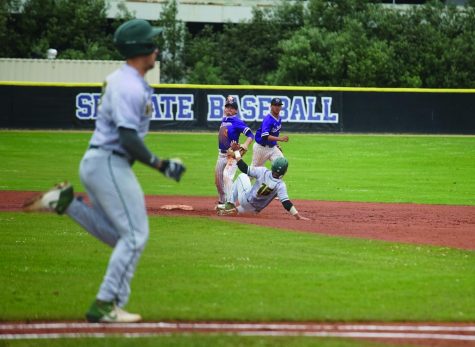 “I expressed how proud I was of the team effort, an “all hands on deck” mentality. I expressed how much the bullpen played a pivotal role in the weekend series and that we can play with anybody in the country. Pomona has been a Division two powerhouse the past eight years and we have taken three out of four last year at Pomona and split with them this season. We hope to earn an opportunity to play them again in the postseason.”

The Gators are now 11-2 when playing at home and 3-6 when playing away SF State. The Gators will look to improve that away record when they travel to Southern California this coming weekend for a four game series against Cal State Dominguez Hills.