UC Berkeley Students rally up to strike at the Mexican Embassy 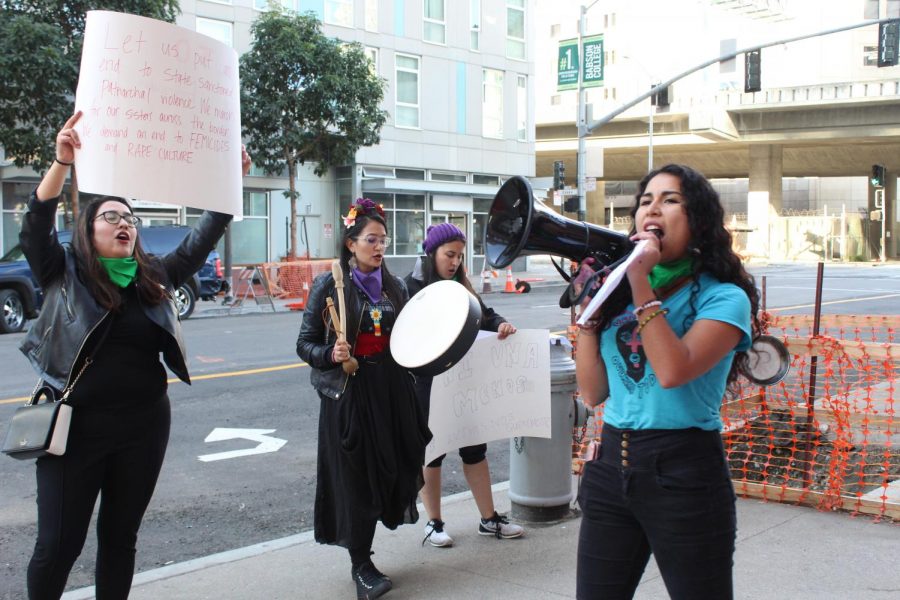 Dulce Lopez an Alumni at UC Berkeley rallying her team up, to strike against women brutality.

On March 9th, in front of the Mexican consulate, UC Berkeley students, alumni and volunteers participated in the strike of honoring those Latina women who have been killed and raped with no consequences

The message that they wanted to get across was how many women have to be killed and abused in their country before any action is taken place.

This in response to the authorities doing nothing to stop the alarming number of women being killed, disappeared and abused. The strike was to show solidarity for their siblings and sisters against this violence. They call it #UnDíaSinNosotras.

In unison they all shouted “What is the Mexico government going to do about it?” “We want to know now!”

Many of the women who came to strike all grew up, or were born in small cities in Mexico, where they expressed more than emotions; they expressed true meanings behind it.

Lupita Lua is a history major graduating this semester at UC Berkeley, she voices the intentions of how angry she is about all events that are happening in Latin America with indigenous women.

On March, 8th Mexico city was flooded with about 80,000 women striking, fighting, saying “Fight today so we don’t die tomorrow.”

All over Mexico women were striking against their place of work, blacklashing the government by setting fires and performing in crowds that caused a huge destruction.

There were about 1,000 femicides — girls and women killed because of their gender — in Mexico last year, up 10% from the previous year. Overall, an average of 10 women were killed per day in 2019.

Dulce Lopez was striking for her rights as a migrant from Mexico this morning and she also believes that she is a refugee.
“I ran away from all the violence and corruption that my own country has created,” said Lopez. “But not only that we have to be aware that the law that is happening in Mexico right now is also happening in the United States as well! For instance, how many women are being exploited for cheap food and cheap clothing in the U.S. they think that they were comfortable but were not.”

During the strike, the women received car honks, and rounds of applause from those passing by.

Another alumni, Andy Cabrera, waved signs at traffic marked with “Her name was Alexa” shining some light on a lost soul.

“For me, from someone who was born here, as a U.S. citizen, who had the ability to further my education, it’s so important for me to leverage my privilege and pursuit of justice, said Cabrera

“I think I can’t stand on the sidelines and watch women and fem’s get killed across the border.” . “This is just to raise awareness to tell those motherfuckers we’re not going to let this happen, were going to put an end to rape culture.”