NBA should pick up right where it left off 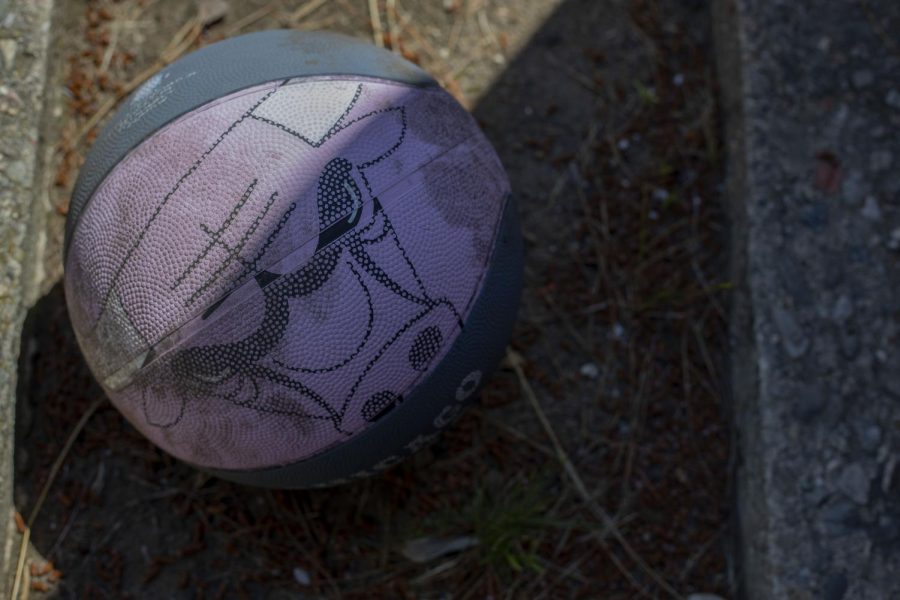 A basketball lays on the dirt of a back-patio garden in Parkmerced in San Francisco, California. (Emily Curiel / Golden Gate Xpress)

Professional sports in the United States remain in jeopardy for the remainder of the 2020 calendar year. Leagues such as the NBA, MLS and NHL that were underway were put to an immediate halt due to the COVID-19 outbreak. The current back and forth pull from sports fans, and more importantly, sport commissioners and executives is whether or not to pick the seasons up where they left off or to start over again once the pandemic is over. In addition, the million dollar question is if fans will be allowed into the arenas.

The NBA was the most affected by the halt. It was the league with the most viewers in the US before the coronavirus and was in the latter part of the regular season. According to the  FiveThirtyEight.com NBA predictions, the Los Angeles Lakers held the highest probability of winning the finals with 27%. The Lakers were looking to end their 10 year championship drought in their first season with both Lebron James and Anthony Davis. Before NBA commissioner Adam Silver indefinitely suspended the season, there were only about 15 games left to play for most teams — the Milwaukee Bucks, Toronto Raptors, Boston Celtics and Lakers had already clinched a playoff berth. Players put hours of work into practices and games to reach these standings in order for a chance at greatness. There was only one team, the Golden State Warriors, without a mathematical chance of making the playoffs. Multiple teams had a higher opportunity to become NBA champions this season, with the Warriors out of the picture for the first time since Stephen Curry, Klay Thompson and Draymond Green came to the Bay Area. Winning NBA titles saves players and coaches’ careers and many could be out of that opportunity this season. Many players, coaches, staff members and NBA beat writers would be out of income without the season renewing. Teams would make an exceptional amount of money during the playoffs to pay all of these involved, and players would rack in more money through sponsorships and playoff/championship bonuses.

However, this break also has the potential to benefit every team, as some players were injured and would be ready to play once the season came back.  One possibility is to finish the current NBA season when government and health officials deem it safe and then for the next season to be played with half as many games. Teams currently play each other anywhere from two to four games throughout the duration of a season, depending on who is in their conference. A simple resolution for next season could be teams play only against each other twice, one at home and one away. Many top tier players will be representing their country in the Olympics next year, and a shortened NBA season would allow them to spend more time with their national team.

In an online poll conducted by the Golden Gate Xpress Instagram page, followers were asked if once it’s allowed and safe, should the NBA resume the season or cancel it? Results were 56% of the voters were in favor of continuing the season, while 44% opted to cancel it. 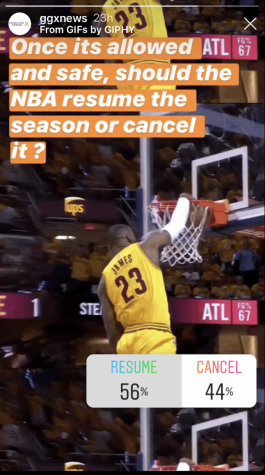 The season would possibly be able to resume and be completed in the winter, even without fans if that’s what it takes. Silver, the NBA commissioner, told reporters in a conference call that the league would comeback “significantly later than June” if it were to be this year. Players are currently working out and would only need a couple team practices to recover chemistry and be able to play full games at the same pace. Everyone is in the same boat, with having to start from square one.

The last major NBA halt was due to the 2011 lockout and executives are currently scramming to make a decision. Nobody was ready for a pandemic and the NBA must look to benefit everyone. The health of the players and fans come first, and there needs to be a decision in the near future where the NBA season will have a chance to come back.