Humpback whales are most impacted by the threat 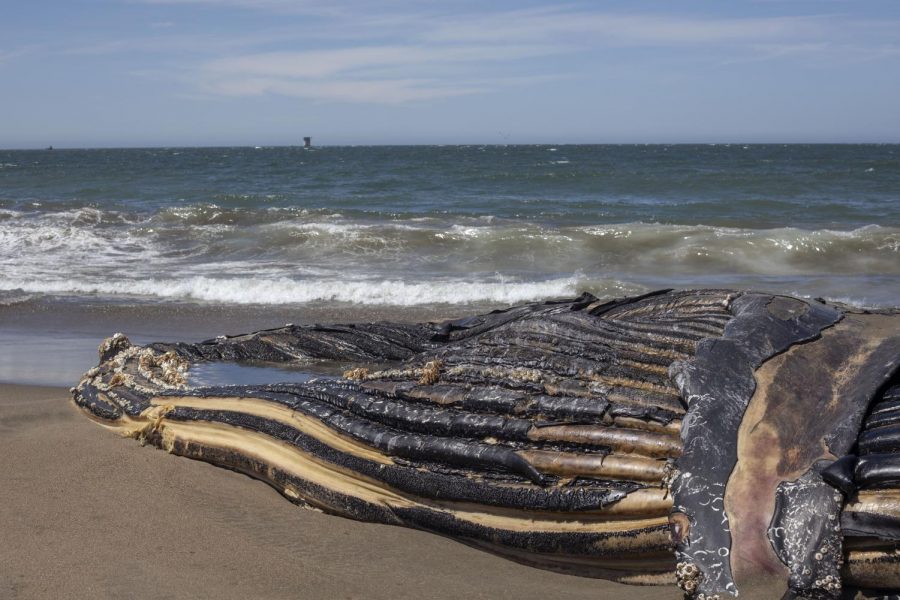 A juvenile humpback whale washed up on Baker Beach on April 21. The cause of the young whale’s death is currently unknown, though California Academy of Sciences performed a necropsy. Humpback whales are protected under the Endangered Animals Act but their local population has faced adversity in recent years. The Bay Area has become a hot-spot for whale entanglement.

The California Department of Fish and Wildlife Director Charlton Bonham issued a declaration on April 22, 2020 to protect whales and other marine life from what Bonham cited to be “significant risk of marine life entanglement” due to crab fishing. The declaration will remain in place through the duration of the 2019-2020 Dungeness crab season.

Commercial Dungeness crab (or rock crab) fishery south of the Mendocino-Sonoma county line must remove all fishing gear from ocean waters by May 15.


The lawsuit that brought us here
The Center for Biological Diversity brought a lawsuit against California Department of Fish and Wildlife in 2017 over insufficient protection of marine animals and alleged a violation of the Endangered Species Act.

Steve Jones, media specialist with the oceans program at the Center for Biological Diversity said, “We’ve been working on this for years.”

“We were on the original working group. They (The Center for Biological Diversity) were forced to sue in 2017 and we were about to win our lawsuit when we settled with the state last year.”

Jones said the issue continued to get worse so the Center for Biological Diversity took further action with the lawsuit.

According to the lawsuit settlement, the Center for Biological Diversity alleged that the California Department of Fish and Wildlife “caused and is causing the ‘illegal ‘take’ of threatened and endangered humpback whales, endangered blue whales, and endangered Pacific leatherback sea turtles.”

The settlement says the Center for Biological Diversity’s  primary focus was on California Department of Fish and Wildlife’s “authorization, permitting, licensing, overseeing, and management of the California commercial Dungeness crab fishery,” which it alleged “is killing, injuring, harming, capturing, and otherwise causing ‘take’ of humpback whales, blue whales, and leatherback sea turtles in violation of’ Section 9 of the Endangered Species Act.”

The lawsuit came after California had record breaking whale entanglements for three consecutive years. Whale entanglements peaked in 2016 – according to a press release from the Center for Biological Diversity.


What is whale entanglement and why is it a problem?
Professor of fisheries and wildlife at Oregon State University and associate director of the Marine Mammal Institute, Scott Baker, said entanglement is “a pretty challenging topic overall.”

He said he guesses that somewhere around half of entanglements are due to somewhat “unknown causes.”

“That is, they can’t attribute it to a specific fishery,” Baker said. “But for the ones that they can explain, the California Dungeness crab fisheries seem to be the offender.”

The 2019 West Coast Whale Entanglement Summary published by National Oceanic and Atmospheric Administration, or NOAA, said “since 2013, there has been a large increase in the overall number of whale entanglements reported along the U.S. West Coast. While ~50% of entanglement reports cannot be attributed to a specific source, Dungeness crab fishing gear is the most common source.”

While gray whales, turtles and other marine animals have some risk of entanglement, Baker said that Humpback whales are really the ones at the center of entanglements.

“Humpbacks are probably one of the more susceptible (marine animals) because they have very large flippers and large flukes,” Baker said. “Essentially as they swim past a slack line of any kind, there’s a tendency for that slack line to wrap around the fluke or the slipper or in some cases around the baleen if they’re actually feeding.”

Once the whale gets entangled, Baker said it stays entangled the majority of the time.

Entanglement has a variety of impacts on the animals. It can prevent a whale from feeding, cut off its tail and cause death.

Dr. Bruce Mate is the emeritus director of the Marine Mammal Institute at the Hatfield Marine Science Center at Oregon State University. He’s an expert on gray whale migrations and invented the method of tracking endangered large whales via satellite radio.

Though he has seen a lot of entanglement throughout the years, he said that rates in Oregon are much lower than those in California.

“I think you (California) have a lot more fishing gear in the water and I think the data in California would support that. It’s very ‘place sensitive,’” he said. “That is to say, the north end Monterey Bay is where I understand the vast majority of entanglements are occurring.”

NOAA’s 2019 report shows entanglements all along the coast of California but the greater Bay Area seems to be the hotspot.

The Working Group created the Risk Assessment and Mitigation Program (RAMP) which is intended to support the collaboration of state, fishermen, researchers and others.

According to Bonham’s recent declaration “The four RAMP factors evaluated by the Working Group led to a majority recommendation for the Central and Northern Management Areas to remain open to commercial Dungeness crab fishing.”

The declaration goes on to say that a small minority from the Working Group recommended a “precautionary approach to management” in consideration of the Humpback whales increased migration through the fishing area.


What is causing the rise in whale entanglements?
Michael Hang is a Master of Marine Science and worked in whale watching for about two years, in the Monterey Bay area.

“The central California population of humpback whales migrate from Mexico to Monterey Bay in the summer,” he said. “So in the winter they spend most of their time in Mexico mating and giving birth and then they come to Monterey to feed.”

“When they’re feeding, they can come really close to the shore,” Hang said. “You can sometimes see them from the beach.”

Ellen Hines is a Geography professor at SF State with the Estuary and Ocean Science Center. Another reason that 2016 might have had so many entanglements, she said, was that a warm water mass or heatwave, nicknamed “the blob,” appeared in the Pacific Ocean in 2014.


The threat to humpback whale populations
The California Department of Fish and Wildlife disagreed with the RAMP conclusion after conducting an independent assessment, which then prompted the crab-fishing season closure.

Baker said entanglement could do real damage to the humpback whale population.

“We had hit a level where it actually is likely to be having impact and that’s a subject of considerable debate among scientists,” he said. “But the numbers of reported entanglements is, certainly less than the number of true entanglements. So what we’re looking at from the records that are submitted to NOAA (National Marine Fishery Service) are almost certainly, well, we know they’re under-estimates.”

“If we make a rough approximation that, that might only be half of the true number. And that’s, a speculation, but just for argument’s sake, it’s only half of the true number,” Baker said. “That’s a hundred deaths a year, that is not trivial for the population. Which has certainly recovered since whaling, but that recovery could be reversed.”

What about the fisheries?
Though Hines is a scientist who strongly believes in the conservation of these animals, she’s not by any means a fishery abolitionist and acknowledges the important role fisheries play in their communities.

We do have to anticipate and prepare to adapt the way we collect resources though, Hines said.

“I think we have to be ready for things to change,” she said. “The Dungeness crab fishery is an amazing fishery. I’m vegan, so I don’t eat it, but, it supports a lot of people. And I work in different fisheries around the world – I work in Chile for instance – where you’ve got so many people who are depending on fishing. … But the people who make a living off of gathering direct resources – you know – fishing, logging, but especially fishing, it’s going to change.”

Jones said that the inter-group accountability and risk management assessments will hopefully encourage “a system for encouraging people to use ropeless gear.”

“We’re very encouraging of the development of ropeless gear,” he said. “And our settlement agreement allowed those using ropeless gear to continue crabbing after (seasons end.)”

Commercial Dungeness crab fisheries will have a four-week time frame to remove equipment from the ocean according to the declaration.

Bonham’s declaration acknowledged the added layer of difficulty for grabbers to remove gear due to COVID-19.

“Industry representatives on the Working Group indicated that four weeks would be needed to safely remove gear due to the unique operating conditions imposed by the COVID-19 pandemic coupled with the oceanographic forecast for strong coastal winds.”

Continuing story check back for updates.

Story updated April 30, 2020 – Additional interviews have been added and story has been given subheads
Story edited on April 28, 2020 – A quote attributed to Bruce Mate was misrepresented in regards to grey versus humpback populations and has been corrected.