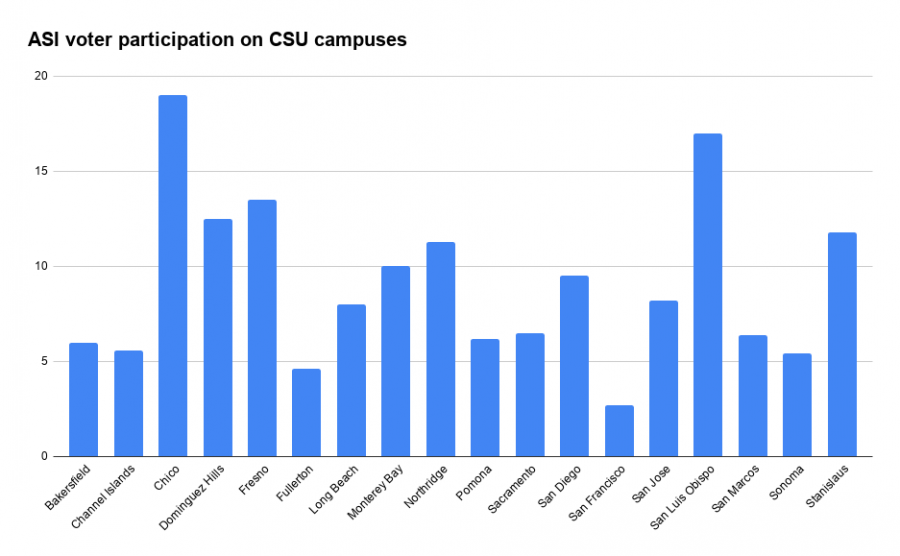 Associated Students Inc. released this year’s election results on Friday, showing a complete victory by a group of candidates under the slate Students First, Students in Solidarity. Of the 13 open positions, SFSIS had candidates in 12 and won them all.

Four of these successes can hardly be called contests, however, as the candidates ran unopposed. This includes the presidential election, where junior Andrew Carrillo, currently working as the vice president of finance, won 91% of the vote with 651 votes.

“We made sure to reach out to all student organizations on campus reminding them to vote in the election and telling them our platform,” said President-elect Carrillo. “We worked hard and brought together a diverse group of students who are passionate about making positive change on campus.”

Education Representative-elect Vanessa Miller, the only candidate not associated with SFSIS, was the fifth candidate to run unopposed. Miller, a last-minute write-in candidate, won her seat after receiving only two votes. Miller told Xpress she will be joining the college of education next semester as a graduate student and decided to run for office after seeing that nobody else had registered as a candidate for that paticular seat.

“I don’t know too much about the position just yet,” Miller said. However she added that she looks forward to learning more about her new role and representing her new college.

Christine Amador, a leadership development coordinator for ASI, cited the current pandemic as a major reason for the lack of competition.

“Almost all of those [unopposed] positions had at least one other person running, but those individuals decided to recind their applications due to various personal circumstances, all before the voting period even started,” Amador said. “Most cited school or other hardships related to the current pandemic as their reason.”

Five candidates ran for vice president of social justice and equity, more than any other position, but Chantel Bermudez received 47% of votes, with second place candidate Saloni Bhatia getting just under 20% of votes.

The largest landslide with at least two candidates was in the election for vice president of finance. Rashid Abdul Rahiman won 90% of votes and second place write-in candidate Jugal Bhatt received just under 4% of votes.

This election also produced the lowest voter turnout of any CSU so far this year. Of the 23 CSU campuses, 18 have held elections and released easily accessible voter turnout data. Three campuses, Humboldt, San Bernardino and Los Angeles, have yet to hold elections. Two campuses, East Bay and Maritime Academy, did not publish voting data and did not respond to a request for data.

The average voter turnout for those 18 campuses was 9%, putting our turnout of 2.7% at less than a third of the average. SF State was also one of only two campuses with less than 5% voter participation, along with CSU Fullerton.

“I believe we did our part in trying to engage people on social media but that’s only a factor,” Carrillo said. I think we need to look at ways in which AS and the university can help create a vibrant culture of voter participation in campus elections.”

ASI Executive Director Tonee Sherrill, who began in his position in January, listed voter participation as one of his highest priorities during an interview with Xpress at the time. Sherrill did not respond to a request for comment.