UFC sets the stage for sports to possibly return 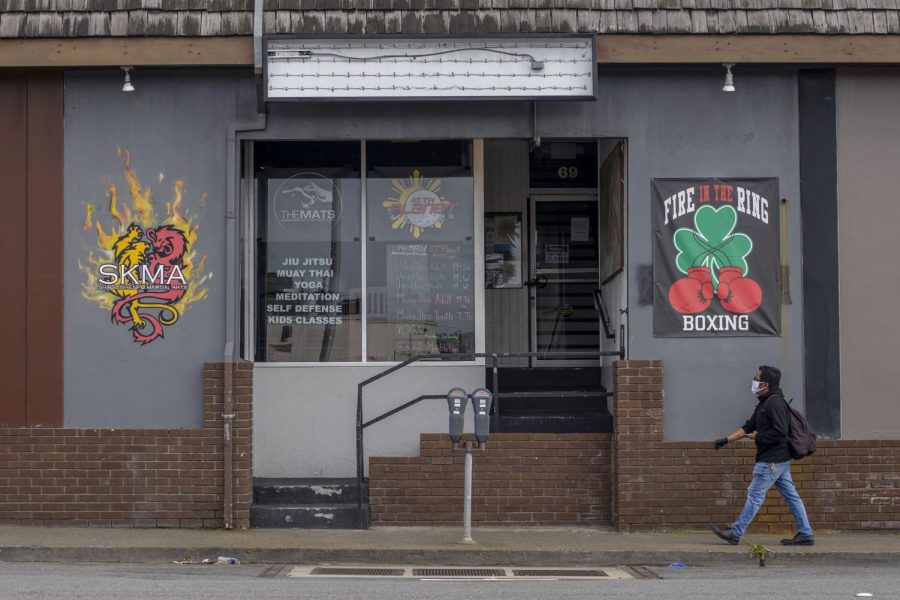 After a 57 day hiatus of no professional sports in the U.S., UFC President Dana White presented UFC 249, on the ESPN+ app, a PPV card with nine fights last Saturday. The main event stole the show with Justin Gaethje knocking out Tony Ferguson in the fifth round for the interim lightweight title at the fan-less VyStar Veterans Memorial Arena in Jacksonville, FL.

The state of Florida deemed pro-sport organization employees essential workers, allowing them to set up the event and the series of UFC fights to go through. The Florida State Boxing Commission granted the fighters licenses in order for them to compete. Fighters were told the risks of fighting and they agreed to the conditions, which included rigourous COVID-19 testing upon arrival.

All but one fighter, Jacare Souza who tested positive the day before the fights and was pulled from the card, tested negative and were able to fight. However, testing negative does not always mean the fighters are safe.

“There is always a chance depending on when they tested negative,” said Dr. Matt Lee from the Kinesiology Department at SF State. “If the athletes have not shown symptoms and have been affected after testing negative, there is a possibility of them transmitting the disease. Additionally, there is always the possibility of a ‘false negative’ test, which means that a person had a negative test even though they were infected.”

UFC President White stated that the UFC administered a total of 1,200 tests leading up to the fights.

MMA fights and blood go hand in hand in terms of constant contact between the two fighters. It is reasonable to think that the first sport to come back would be one that involves a lot less contact due to social distancing restrictions. However, just because of the constant contact in MMA, doesn’t mean it’s the highest sport at risk of spreading the virus.

“Obviously the close contact of combat sports increases the risk,” Dr. Lee said “However, to the UFC’s advantage, the fighters are only coming in contact with their one opponent. Sports like basketball, soccer, etc. put an athlete in contact with several people thus potentially increasing the risk of transmission.”

Fighters in the UFC are willing to take these risks because the only salary they receive is from fighting. Gino Francisco, the head coach and owner of Jiu-Jitsu gym 10th Planet in Daly City, CA, knows what this situation is like.

“For many in the UFC, it is their only source of income,” Francisco said. “Having been a fighter and having many friends who are professionals, I don’t feel right to chastise their decision to fight. This is what they need to do to feed their families.”

Many Jiu-Jitsu fighters have the dream of one day competing in the UFC. Francisco wants to continue to help his students reach this goal, and has adapted his local Bay Area gym to meet the requirements of social distancing.

“Our team is making a lot of adjustments to our training methods to keep everyone safe. We are currently supplying masks for our students and offering classes that require no physical contact,” Francisco said.

10th Planet has continually made adjustments that include a variety of online classes every week.

Francisco points out how there has been a widespread of hate crimes directed towards Asians due to the stereotypical “ignorance” that Asians have spread the virus. “I believe that [videos posted online of hate crimes] creates demand for martial arts schools because martial arts teaches you how to defend yourself,” Francisco said.

Gyms in general have been closed for months across the country and people are anxious to work out at their gyms again. Francisco expects to see an uproar of new students once the pandemic is over.

“People will need to get in shape in order to boost their immune system and stay healthy. Training for fitness will still be in demand. I do think people will still be signing up to train and learn once the pandemic is over. Martial arts has lasted thousands of years and continues to grow. Despite the changes in society, I don’t see it going anywhere,” the gym owner concluded.

The UFC coming back also opens the door for a potential return in similar combat sports, such as college wrestling. Jason Welch, the wrestling head coach at SF State, believes wrestling can comeback in a similar way in the near future.

“[The UFC event] was a no fan event, with 10-20 people, which is similar to a dual-meet in college wrestling (compared) to a tournament. The first thing we’re looking for is to see if school will be opening in the fall…and hopefully if (school) is open in the fall and the NCAA also is on board then we can have somewhat of a season,” Welch said.

SF State and other college sports teams would need to wait for a college board decision along with a NCAA decision in terms of bringing sports back as a whole. Welch is open to do virtual training for the wrestling team once they are allowed to be hosted.

“Whatever the NCAA and our conference allows us to do, we’re going to do it, whether the precautions are virtual or online [training] for a certain portion, we’re going to provide our support and training as much as possible,” Welch said. Welch and the rest of his coaching staff is currently waiting for SF State’s official decision for the fall semester to plan his practices.

No other sports in the US have any set dates for returning. The UFC has cracked open the door for other professional sports to return. Despite losing, Ferguson served as a spokesman for every athlete and ended his post fight interview with, “Remember we did this guys for you (fans)—bringing sports back…”