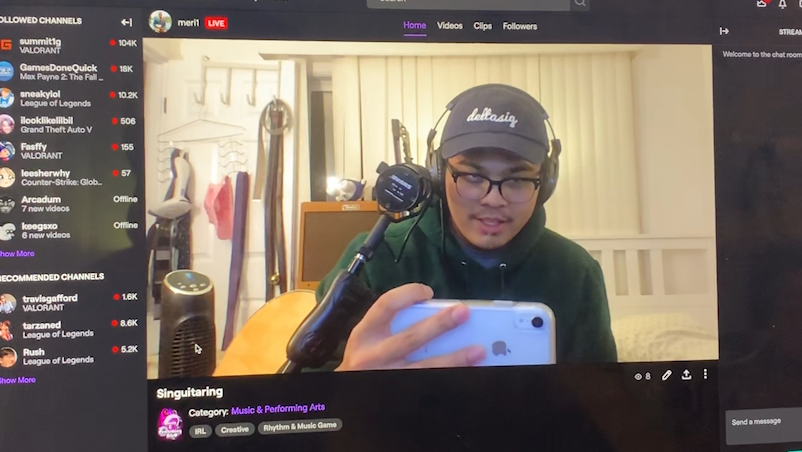 Many venues have shut down in the Bay Area, resulting in all music concerts and performances to be cancelled. As a result, music artists have taken their talents to live streaming platforms such as Instagram, Twitch and Facebook live.

Twitch, which is a common live streaming platform, enables artists to provide a virtual music experience for their fans.

“We live in a time where social media is everywhere and everyone uses it,” Arellano said. “So what I have done is I have created a Twitch account and I plan on doing bi-weekly live streams or DJ sets.”

Julianne Arellano, known as DJ Juls, had all of her gigs canceled last month due to the coronavirus pandemic. However, Arellano has been staying connected with her listeners online.

As a first-generation student and soon-to-be graduate, this semester at SF State is an important milestone for Arellano. With all classes taught online and graduation just around the corner, Arellano has found this new transition to be a challenge.

Despite these difficulties, Arellano has been using music as a means of escape by finding different outlets and taking advantage of social media to share her DJ sets.

Recently, Arellano took part in Quarantine for a Cause, an online three-day event presented by 1015 Folsom, a popular bar and nightclub in San Francisco. The live stream featured various music artists while raising funds for Bay Area workers and families affected by COVID-19.

Ranging from hip hop and R&B to funky house, Arellano keeps her sets diverse in order to target a larger listening audience.

Lorenzo Merilleno, a musician, is another SF State student that has taken advantage of time at home by engaging in live streams to promote his own music.

As a singer and songwriter, Merilleno had experience with live streams before the quarantine took place. Merilleno noted that it was a great way for him to practice performing in front of an audience and connecting with people.

“I’m kind of super extroverted, so I need that energy from people,” Merilleno said. “Live streaming is such a coping mechanism because it’s like posting a video on your Instagram feed right? But if you’re live streaming, even if my friends just hop into the live stream for 10 seconds just to say hi, it already feels so much different. And it makes you feel productive.”

According to recent updates from SF government officials, the Bay Area will be extending the shelter-in-place order until May 31. With this quarantine, many students have left their homes in San Francisco and returned to their families which might limit their growth as artists.

“I know people are really struggling because it’s like being at home isn’t really a healthy place for some people,” Merilleno said. “I’m lucky… blessed enough to have a home be a pretty nice place for me and I can just focus on my craft, but it’s definitely not that situation for every creative out there.”

Elias Macalino, a second year at SF State, is another student that has been involved with music his whole life. Macalino first got into music when his parents signed him up for piano lessons at a young age. The musician later on took up other instruments such as the drums, guitar and ukulele.

Macalino originally majored in philosophy, but decided to switch to a music major. The SF State student is also a lead singer of alternative indie band “No Fiction.”

The quarantine has caused the band to put a halt to all band practices, so Macalino has taken this time to catch up on songwriting and learning various software for recording music.

“It would be really difficult,” Macalino said about holding band practices via Zoom. “So, I guess right now it’s just like trying to write more songs separately.”

Until the band can perform on stage again, Macalino will continue to take part  in live streaming music through Instagram. On April 3, the singer did a live story performance with The Depot, a student funded venue at SF State’s student center.

Macalino also noted that live streams are “convenient” for him to share his music, but lacks that personal one-on-one connection that live concerts have to offer.

Despite the lack of in-person interaction, online streaming platforms have proven to be an ideal substitution for live entertainment nowadays. Arellano has made it a priority to ensure that people feel connected through her live streams.

“I think that it’s super important, which is human connection,” Arellano said. “There’s a lot of people who are living alone. They’re not with their families or are missing someone to be with and so I wanted to be able to make that online presence.”