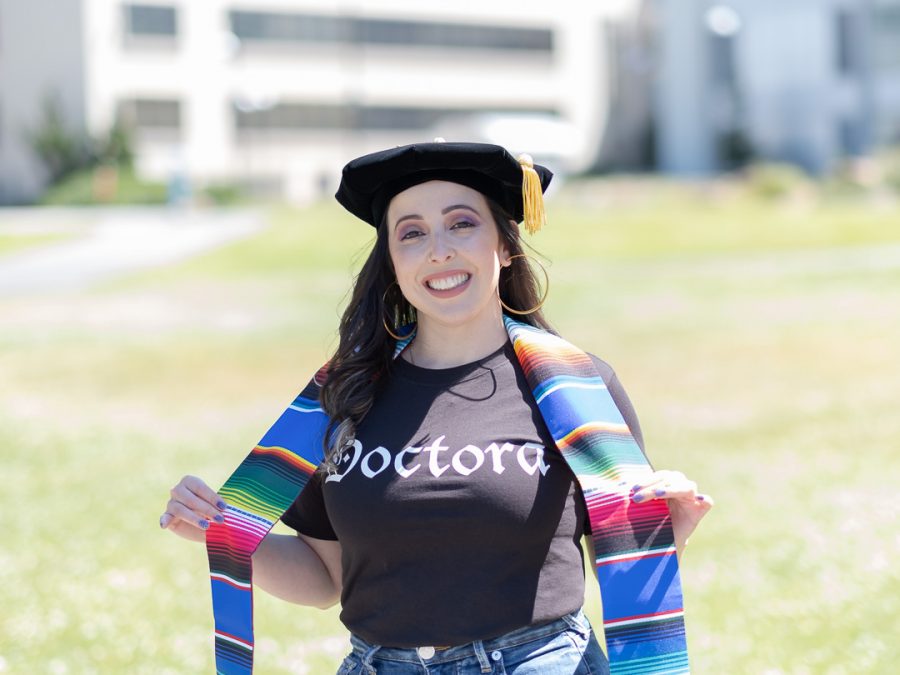 Norma R. Salcedo in her cap and sarape style sash on the lawn across the J. Paul Leonard Library celebrating her Ed.D. in Educational Leadership from the Graduate College of Education (GCOE) at San Francisco State University.

After almost four years of advocacy work at SF State Salcedo stepped down to take on the director role at a similar center at CSULB. Returning to Long Beach is like having gone full circle because Long Beach is where her advocacy work started as a young sister and daughter advocating for family.

Salcedo’s parents met and married in Tepatitlan, a city in Jalisco, Mexico. They then moved to Long Beach where they had three daughters, Salcedo being the oldest. As the oldest in a mixed-status household, Salcedo took up the role of helper and translator for her Spanish-speaking parents.

“Automatically I became the matriarch, the know-it-all. Had to learn how to navigate systems at a very young age,” Salcedo said.

As she grew up, the issues and trials immigrants go through became clear to Salcedo.

She couldn’t have been any more than 14 years old as this happened when she was in middle school. Her mother had just gotten her work permit and her grandpa got sick. The plan was to go to San Isidro and apply for advance parole, which is permission from the government to exit the country while in the process of gaining residency status.

“It had been 13 years since she saw her dad,” Salcedo said.

She waited in the lobby and soon her mom came out in tears after being denied.

She recounted the memory in broken sections interrupted by her efforts to fight back the tears that visibly gathered in her eyes.

“This is not okay. I want to be able to do something. The way the systems have been in place have been dehumanizing and it is not okay,” Salcedo said.

She went on to hold multiple jobs as she studied and got involved at Cal State San Bernardino. Salcedo was the first to go to college in her family.

“I was in a sorority, working at a gym, president of circle K club, worked at a cafeteria, I did it all. There was no job I couldn’t do,” Salcedo said.

She wanted to help students go to school and graduate. The plan was to be a counselor but without financial aid it would be a bit hard.

To pursue higher education, she had to apply to out of state schools’ programs that would help financially. So, she applied and ended up at the University of Kansas.

“Mind you, like I’m, like this 21-year-old at the time never left anywhere east of Arizona,” Salcedo said.

Being out in Kansas she found herself being the only Latina in the classes she was attending. Kansas was also where she began her work supporting the undocumented community through a position as a college prep instructor she was offered. For two summers, she helped people apply to a migrant program offered by University of Kansas.

Kids who would normally end up working in the fields and meat packing industry could now have the college experience they normally would never consider as an option. Some of these kids turned out to be undocumented and Salcedo was there to help. Through this work she changed some of the vocabulary to be inclusive of anyone which included undocumented kids. Rather than specify particular residency status when applying to the program she asked that the application process state that it was “open to K-12 students” which blurred the line of legal status.

In June 2012 when Salcedo was in her second year as a prep instructor the U.S. Department of Homeland Security issued DACA. Deferred action for childhood arrivals or DACA as it is also known allowed certain people who meet particular criteria work authorization while requesting consideration of deferred action for a time period of two years, subject to renewal. Deferred action does not provide lawful status. This allowed her to further expand the work she was doing. DACA brought many undocumented people out of the shadows to find opportunities that were not available before.

After her work in Kansas she moved on to University of Connecticut and her family was very supportive even though they wished she was closer.

At University of Connecticut she worked in residential life where she was given money to start events and programs. Salcedo then began asking about undocumented communities to assist but people shut their doors and blankly denied that there were any undocumented students. Since no one at the University knew or could say where undocumented students could find assistance Salcedo created that space.

When her father got sick, she decided to head back and be closer. Salcedo moved back to California and began work at Cal Poly Pomona. It wasn’t long before she was asking to work with their version of a Dream Resource Center. She was once again navigating and continuing her understanding of the policy and procedures to help undocumented communities. During the two years she was there she realized she wanted to do this full time.

“That’s when I am the happiest,” Salcedo said.

That is when the opportunity to work at SF State presented itself. In 2016, she interviewed for a position without ever having spent any time or set foot in San Francisco.

In July of 2016, Salcedo became the official coordinator for the SF State Dream Resource Center.

“Norma has been a great addition to the SF State community,” Rose Carmona said.

As history shows, Salcedo took the Dream Resource Centers cubicle and made it a home for students to be able to come in and find answers to the many trials that come with navigating life as an undocumented person or ally.

When she received the position, she was working out of a cubicle, and with the persistent work of her students they all fought for an office space, a computer lab area, and a small lounge space.

Departments across campus were welcoming and just like when she was in Connecticut, she mobilized to ask professors to change from work study to employment positions in order to allow DACA recipients the opportunity to apply. In many cases professors didn’t think they could make those changes but all it took was asking and many times Salcedo succeeded.

Her job at state for the most part included of educating others how to help the undocumented community. She wanted people to ask themselves how they could help and act on it or just be proactive when an undocumented student asked for help.

Through her time at SF State she has built relationships that, just like the ones she built in Kansas and Connecticut, will continue to stay strong. Manni Montes, a Becca major at SF State who regularly attended events at the Dream Resource Center, describes Salcedo as a badass mentor with a good heart that one sticks with through thick and thin.

“I will always be grateful to you for your support, kindness, and for being the shoulder I leaned on when I was at my worst. It would be impossible to count all the ways that you’ve helped me in my career,” Montes said.

“You will be missed dearly”