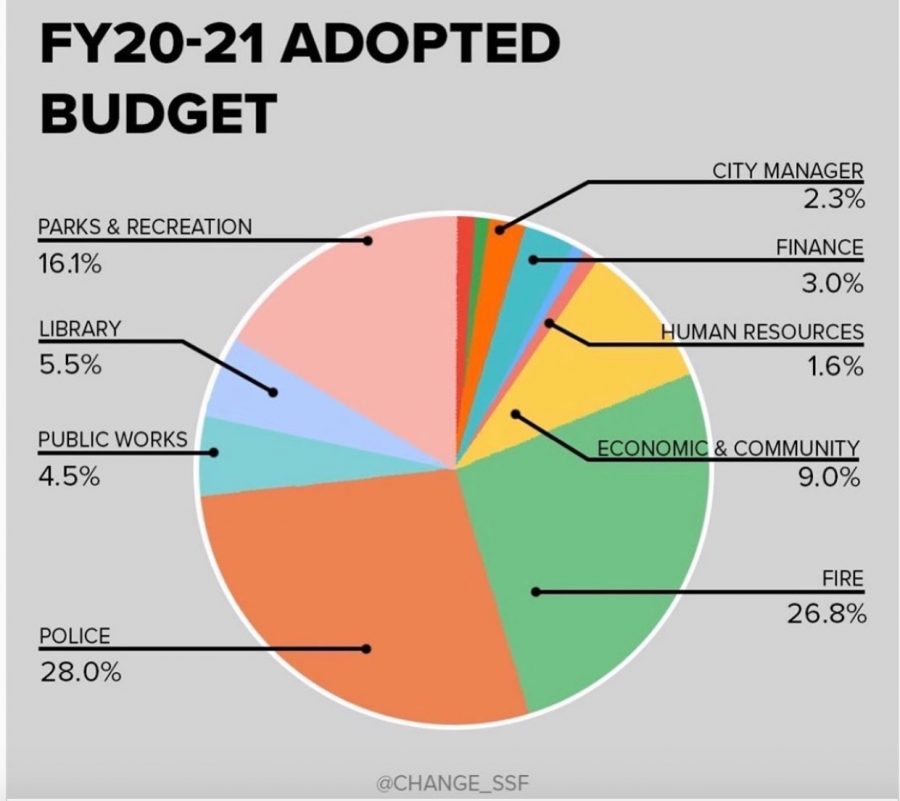 A graphic depicting a breakdown of the proposed budget changes for 2020-2021. As according to the SSF FY20-21 Proposed Budget. Courtesy of CHANGESSF.

Radical renovations and reimaginings of what a police force could look like have gained nationwide attention and legislative traction, but what does defunding the police entail? The newly formed group “CHANGESSF,” a South San Francisco-based (SSF), “multi generational and multicultural coalition” has a clear vision of what that vogue phrase could mean. The group has listed a total of 22 demands it wishes to see implemented in both the South San Francisco Police Department (SSFPD) and city council.

Isabella Perez, a representative of CHANGESSF, stated at the budget discussion that she was dismayed by the growing lack of funding present within South City schools and sees divesting from the SSFPD as a more apt solution.

“Our community population, especially at South Francisco High School, consists of a majority of people of color,” Perez said. “However, the main focus at hand currently in our community, and every community, is Black lives. CHANGESSF stands in solidarity with the Black Lives Matter movement. And although it is not our city that has been on the news, it does not mean racism does not exist here.”

The group formed on the heels of a youth organized protest on June 4. The protest consisted of a march from SSF city hall to the city’s Municipal Services building (which houses the South San Francisco Police Department) and drew hundreds who rallied in support of the Black Lives Matter movement and decried the death of George Floyd.

The city is currently projecting a $7 million shortfall in the approaching fiscal year, partially due to COVID-19. The budget discussion session was implored by speakers from CHANGESSF and the community to redirect funds from the SSFPD to other municipal facilities, such as education and parks and recreation.

“SSFPD’s budget currently takes up 28% of the city’s budget general fund and threatens to cut 2% to address the Coronavirus epidemic,” Carmela Dizon said, a CHANGESSF representative, at the Tuesday discussion. “We propose that instead of cutting an additional 7.37% from the library, 8.1% from the Public Works Department and 12.29% from parks and rec, we cut more funds and divest from the SSFPD.”

SSF’s response to the nation-wide support for the Black Lives Matter movement, according to Danielle Leong, one of the organizers of the peaceful protest, has been generally positive. Leong, who organized the rally with fellow El Camino High School alumni Chiadikama Nzerem and Ethan Mizzi, was surprised by the turnout of hundreds to the SSF protest.

The peaceful march from SSF city hall to the police department culminated, on June 4, in a few impassioned words from various speakers and Mayor Rich Garbarino and Police Chief Jeff Azzopardi taking a knee.

“They did that, and for what?” Leong said. “Nothing happened, like all you did was take a knee … I don’t think they would’ve taken a knee if we weren’t there.”

According to Kanani Cortez, a leader and representative of CHANGESSF, organization and petitions for change have been slightly hampered by difficulties imposed by COVID-19. In place of real-life commentary from residents present at these meetings, with the exception of June 9’s special meeting being held face to face, citizens are given the option to send in written public comments via email to the SSF city council. But Cortez stated the SSF city council chose not to read aloud these written public comments.

“People took the time out of their day. We had over 35 to 50 public comments submitted. And Mayor Garbarino invoked the Brown Act and chose to only read two of them,” Cortez said.  “They were ready to move on. I’m pretty disgusted that during a pandemic, when we do not have the access to show up in person to the meetings, there’s no, you know, in real life meeting. You have it on this online platform, you have to have internet or television access. People took the time out to make a comment, and they chose not to read them.”

The group has begun aggregating free texts, podcasts and data resources related to the history of racial violence and police brutality on its website under the tag, “Educate Yourself!” The group’s list of 22 demands included: restricting SSFPD from hiring officers who were previously fired due to excessive use of force or resigned due to an investigation of serious misconduct, banning paid leave for officers being investigated for misconduct and the banning of rubber bullets and tear gas.

“We’re looking at what other cities are asking for,” Cortez said.  “There’s basic sociological evidence that shows more school counselors, more mental healthcare, more Women’s Resource Centers, more, you know, substance abuse counselors, means less crime. At the end of the day, a majority the crime [the city council is] talking about in South City is a poverty issue.”

Cortez went on to say that City Councilwoman Karyl Matsumoto insinuated that the death of 15-year-old Derrick Gaines  at the hands of SSFPD in 2012 was justified.

“Multiple people [were] brought up to share their grief and anger about Derrick Gaines,” Cortez said “And she claimed that there’s more to the story. I don’t care if there’s more to a story. That’s disrespectful. There’s no reason to speak of a child’s death like that.”

SSFPD Police Chief Jeff Azzopardi has expressed support for the reformist campaign “8 Can’t Wait,” a campaign aimed at bringing a statistical reduction to instances of police violence. The group has, however, issued an apology as it felt, in light of recent developments, that their efforts were counterproductive and ultimately derailing the work of others. They stated on their website homepage, “The #8CANTWAIT campaign unintentionally detracted from efforts of fellow organizers invested in paradigmatic shifts that are newly possible in this moment. For this we apologize wholeheartedly, and without reservation.”

“ [Azzopardi] spoke [at the budget discussion] and said that six out of eight of these he agreed with and would employ, and two of them he’s interested in conditionally. But what I’d like to say about ‘8 Can’t Wait’ is it’s not good enough,” Cortez said. “‘8 Can’t Wait’ implies that we can reform what is happening in these police departments, and that we can make these changes and we’ll see 72% less police violence. And I think that these reformist strategies aren’t enough. ‘Require notifying before shooting … ’ someone is still getting shot.”

In a press release written in connection to the SSF rally, Azzopardi wrote, “The misconduct by the police officers in Minneapolis does not reflect the professionalism and high expectations of our officers here in South San Francisco. We have always been here to protect and serve our residents with integrity and honor, and that will not change.”

Cortez though, was conscious that the defunding of the police could potentially be seen as something dauntingly unknown.

“This is scary. ‘But what do you mean, we can’t have cops? Who’s going to help me with this? Who am I gonna call when this happens?’” Cortez said. “This isn’t about, ‘We hate these people, throw them all away.’ It’s about the need to invest back into the community, with professionals who can address so many different issues that the police aren’t exactly qualified for.”