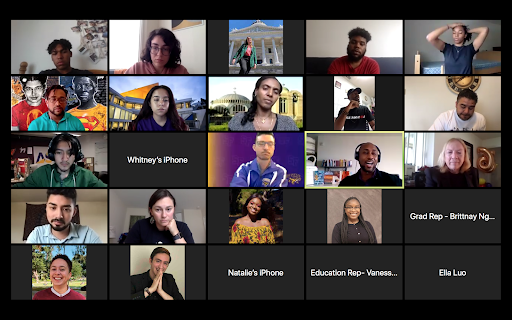 Editor’s Note: A previous version of this story featured a quote from a source who referenced a proverb by Chinese philosopher Lao Tzu, but incorrectly recounted it as an African proverb.  The quote has been omitted from the story, and Xpress takes full accountability for failing to fact check the source.

Emotions ran high as students openly shared their lived experiences with one another and aired their grievances to campus administration representatives during a virtual Open Forum for Black Students organized by the SF State Associated Students organization’s Social Justice & Equity Committee (AS SJEC) on July 24.

The two-part forum’s purpose was to create “a conversation with AS SJEC for Black students to voice concerns on University accountability,” according to an invitation sent via email by the College of Liberal and Creative Arts. The AS SJEC committee members dedicated the first half of the forum for students to “talk about experiences, concerns and, opinions.” An hour into the forum, three administration representatives –– two of which were white –– joined the Zoom meeting.

Assistant Vice President, Division of Equity and Community Inclusion Frederick Smith, who was the sole Black member from the administration in attendance, was joined by Danny Glassman, associate vice president for student life, and Interim Vice President of Student Affairs and Enrollment Management Beth Hellwig.

The forum was a multitude of issues important to Black students. Each shared their own personal stories, which brought up a series of correlated issues that were woven in each of their experiences. There were moments of frustration and tension, along with shared tears and solitude.
Administrative Responses, Or Lack Thereof
After Black Lives Matter-inspired (BLM) protests gained traction this summer, SF State students began to look toward the University for its response. Graduate student Nia Hall advised fellow attendees to review President Lynn Mahoney’s July 17 message regarding her take on BLM.

The statement listed nine priorities, including increased hiring of Black faculty and staff and more funding toward Black resources. Hall, alongside other students, wanted a specific timeline and budget for these proposed actions in order to feel like the University was really taking action.

“What is the timeline? Where’s the budget? Where’s that money coming from? How are we as Black students going to be in those conversations when it comes to hiring more administration that are Black and more faculty and staff that are Black?” Hall said in the early moments of the forum.

Assistant Vice President Smith said that each issue has its own timeline of work due to the nature of institutional changes, and some reform may not take effect until after many of these students graduate. His first task is to address what Mahoney and other administrators call “low-hanging fruit.”

“What are some of the things that are going to be long term in terms of things that we can show or deliver results within six months to a year? But also, when we think about institutional change, sometimes things might have to take three to five years. For some things to materialize, it’s almost like a generation,” Smith said.

Smith acknowledged that firm deadlines on Mahoney’s initiatives were undecided but did say that discussions on “deliverables and timelines” had commenced. Smith offered students a deliverable relevant to the discussion “in the coming weeks.” He pivoted to his current priorities on the Campus Climate Assessment Project (CCAP), which is described as a “needs assessment effort to guide priority setting for the Division of Equity & Community Inclusion.” According to the CCAP website, the last report was published in the spring of 2019.

After Smith responded, Associated Students Chief of Staff Tyler Lewis adroitly moderated the forum by instructing administration officials to respond to students clearly and efficiently, without administrative jargon. Lewis says her comments were a counter strategy to maximize the amount of time students had to speak, but to also draw substantive replies, which were somewhat lacking.

“During the second half of the forum, the responses became rather long and took up space that was meant for Black students. It’s not okay, and it’s important to remind administration when it’s our turn and our time to speak,” Lewis said.

When Lewis facilitated the Student Leader protest against the Department of Residential Life last year, she found that administration’s “long-winded answers” would only bring up more questions and no solution, with the only result being less space for students to speak their concerns. Per her request, the administrators agreed to avoid academic language in this discussion.

“Sometimes it’s intentionally used to waste time and is extremely frustrating. Administrative language isn’t something that students use to communicate on a daily basis, nor is it something that all students are familiar with,” Lewis said.
Limited Black Academic Spaces Hinders Success
Ja’Corey Bowens, an Associated Students College of Ethnic Studies Representative, said that the event’s dialogue was invaluable to identifying the inequities Black students face both inside and outside the classroom.

“Not only is the curriculum lacking in correctness and euro-centric centered, but Black students don’t have the spaces or resources to succeed in their coursework and academic environments,” Bowens said.

Senior Claire Weeks, biology major, expressed her concerns as a Black student in the science field. Though there’s been recent strides to diversify STEM majors, it is not enough to merely include students of color in the classroom. Weeks believes there needs to be adequate resources geared for Black students in order for them to succeed.

Whitney Holmes, a junior studying Speech-Language Pathology, has experienced a “multitude of disappointments” in her major. She believes the curriculum does not consider Black students in the classroom.

“I have faced discrimination and retaliation from faculty and tutors in my program who felt that my major was something that would be almost impossible for someone that had the circumstances that I was faced with,” Holmes said.

She found people on campus that genuinely wanted to help her succeed, but they weren’t a part of her field of study and couldn’t help her with her financial hardships.

“I’ve seen so many young Black girls give up,” Holmes said. “They literally start the fall semester and are nowhere near my program once it’s spring.”

Despite adversity, Holmes believes it’s imperative to have Black students in STEM.

“When I walk into Kaiser, when I go into UCSF, I don’t see a lot of people who look like me,” Holmes said. “I’m seeing the systemic reasons why every time I step on campus, every time I go into a class, every time I run into an issue.”
Black Academic Mentorship, Faculty and Staff
Damion Square, a co-moderator for the forum, said the university needs to look at enrollment, retention and the graduation rates of Black students in order to see the impact of depleted resources.

“We’re all as Black students acutely aware of the inherent biases that are baked into the system,” Square said. “It’s very important that the pillars for Black students on campus are running very, very efficiently.”

Square defined the three pillars on campus are the Black Student Union, the Black Resource Center and the Africana Studies department.

“Due to these things not running efficiently, it’s affecting the entire Black student collective,” Square said.

According to the school’s demographic sheet, 4% of SF State’s faculty and staff on campus this year were Black. Students said they need mentorship, and they aren’t receiving support from the few Black professors on campus, even in departments that are supposedly geared toward Black students.

Zemaye Jacobs, recent graduate of SF State, rated her experience with the Africana Studies department a seven out of 10 due to the frequent churn of professors and department leadership.

“It’s very conflicting that you can’t even go to your own people that are on this campus that look like you and aren’t even here for you,” Jacobs said.

“The main catalysts for Black experiences that are bad on campus are due to the lack of socialization of resources and lack of community which stems from the dysfunction from the African Studies department,” Jacobs said.

Holmes said she joined an Africana Studies course last fall in efforts to “reconnect” to her “roots” and find community on campus. She said the instructor was a “ghost professor,” unavailable and unreliable with email responses.

“I’m out here trying to advocate for people like myself, and here I am trying to communicate with one of my professors who look like me, and I can’t get a response,” she said.

After Holmes got in a car accident in September, she said she needed extensions and support. She didn’t have her absences and late assignments resolved until 2 weeks before the end of the fall semester.

“This is my department for my people, so where is my support?” Holmes said. “I expect this over there with the white people, not with you guys.”

During the second half of the meeting, Square addressed Assistant Vice President Smith directly and wished him luck as one of the few Black members in the school’s leadership.

“I applaud you, man, you have to be the Black buffer between the Black students on campus and the white administration that you’re working with,” Square said. “I know this is only your first year, but hopefully, you know, you have a therapist at hand because you’re going to need it, my man.”
Productive Session
Moderators of the forum were successful on two fronts: providing a safe place for Black students to talk with one another and pressing the administration on delivering results on Mahoney’s BLM initiatives. Associated Students Chief of Staff Tyler Lewis said that holding the administration’s feet to the fire is paramount because of its murky track record of support for Black students.

“In my past experience, administration often will agree to making positive change but end up never following through with whatever promise that they make,” Lewis said. “I find that giving them a hard deadline and making them agree to that deadline in public and on record helps hold them accountable. Also, when they fail to follow through on that deadline, it looks bad on them.”

The administration went on record at the forum, saying it would deliver an update to the AS SJEC on August 24.

The forum was productive for the students that attended, as well as the administration representatives. Smith said his intention before attending the second half of the forum was to absorb the experiences of Black students so he could better help shape their lives on campus in a positive way.

“My goals before the meeting were to listen, learn and pay attention to what students shared,” Smith said. “Now that I have had a chance to hear what’s on students’ minds at the forum, I will keep this in mind with my work.”

Organizers of the forum agreed that a spirit of cooperation was present in the meeting. According to Damion Square, who said the first step forward was taken, the forum also left a sense of skepticism.

“Respectfully, I have a very, very hard time believing anything that you guys are saying right now in terms of your commitment to actually adequately and affirmatively addressing these issues that are dealing and have been plaguing Black students at that university historically for decades,” Square said.