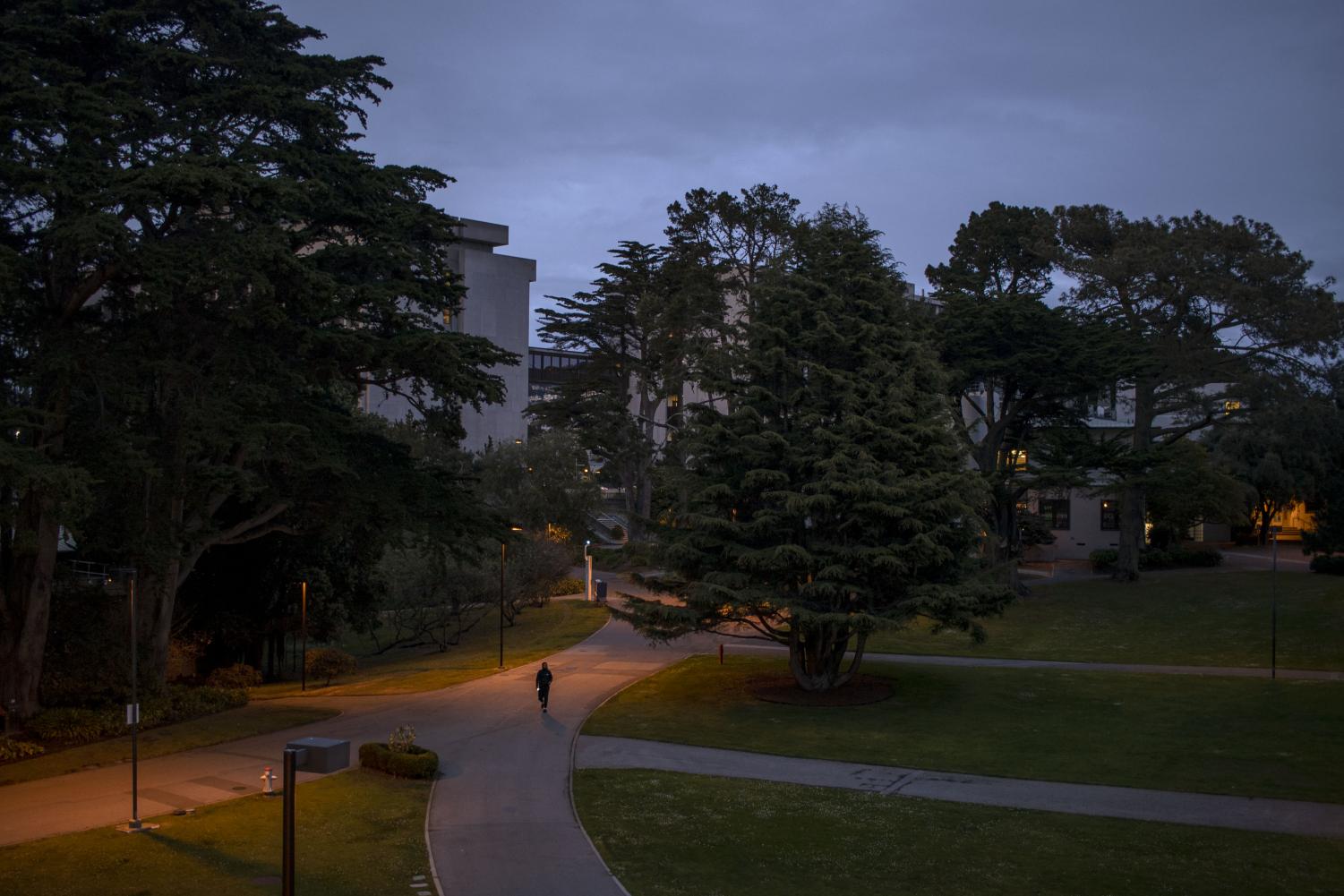 Selected staff would be notified 60 days prior to official termination, in accordance with collective bargaining agreements. If the process is to move forward within the next few weeks as Associate Vice President of Human Resources Ingrid Williams said. Laid-off staff would be able to teach through most of the Fall 2020 semester. (Golden Gate Xpress) (Emily Curiel)

Selected staff would be notified 60 days prior to official termination, in accordance with collective bargaining agreements. If the process is to move forward within the next few weeks as Associate Vice President of Human Resources Ingrid Williams said. Laid-off staff would be able to teach through most of the Fall 2020 semester. (Golden Gate Xpress)

SF State will move forward in the process of laying off staff members “in the next couple of weeks,” Associate Vice President of Human Resources Ingrid Williams said at the Aug. 27 University Budget Committee meeting.

The decision to lay off fewer than 100 members was made in an effort to reach a balanced budget for the 2020-21 school year and eliminate a roughly $40 million deficit. Williams explained at the meeting, which included 114 participants, that information regarding the layoffs is in the process of being finalized with President Lynn Mahoney.

“No one wants to reduce our workforce,” Mahoney said during the Thursday meeting. “No one –– myself most of all –– but as we continue to get here, the circumstances we find ourselves in don’t leave us much recourse.”

The meeting, headed primarily by CFO and interim Vice President of Administration and Finance Jeff Wilson as well as Provost and Vice President of Academic Affairs Jennifer Summit, laid out to the UBC the different scenarios Mahoney was considering taking to balance this year’s school budget. The purpose of the meeting was to allow the UBC, comprising staff, administrators, faculty and students, to weigh in on the options and provide Mahoney input for her decision-making. All three scenarios presented to the UBC were highly dependent on this year’s student enrollment.

No one wants to reduce our workforce … but as we continue to get here, the circumstances we find ourselves in don’t leave us much recourse.”

Wilson and Summit provided two other enrollment scenarios, one anticipating a 6.7% decline (scenario one) and another a 4.5% decline (scenario two). Each brought in altered predictions of revenue that would determine how many layoffs are necessary to satisfy the school’s financial needs. Scenarios one and two would save $11.1 million and $8.7 million respectively through workforce reductions, compared to the pre-meeting scenario calling for $11.9 million in savings from workforce reductions

Mahoney decided on a more middle-of-the-road approach for navigating the budget and reducing layoffs for now — one that lowers the need for workforce reductions to $9.1 million, a figure closer to the second scenario. While Mahoney said she wants to avoid as many layoffs as possible, she said that opting for the more optimistic scenarios could result in unforeseeable consequences.

During the meeting, Associate Dean of the College of Ethnic Studies Amy Sueyoshi seconded a middle-of-the-road decision.

“I think I’d, rather than take an axe, I’d rather just cut in moderate ways first, so it’d be something more like a scenario two, which is not overly optimistic, but it’s not taking an axe to the tree,” she said.

Williams would not commit to a timeline for notifying staff members. Now that Mahoney has decided on a scenario, layoff classifications will be created and forwarded to the Chancellor’s Office, which would notify staff unions before the university formally notifies the laid-off staff.

Selected staff would be notified 60 days prior to official termination, in accordance with collective bargaining agreements. If the process is to move forward within the next few weeks as Williams described, laid-off staff would be able to teach through most of the Fall 2020 semester.

Wilson explained that planning for what he described as “more optimistic enrollment numbers” had two potential revenue risks: a change in non-resident and resident enrollment as well as student registration cancelations. The risks are projected to result in a $1 million impact each.

“Historically, [canceling student registration before instruction begins] has been a practice that prior to the beginning of the instruction, we would disenroll students or drop students or cancel their registrations … This year we didn’t,” he said. “And so the risk around that is that we know a portion of those students who remain enrolled will probably not show that, and that revenue will not be realized.”

The school originally planned for as many as 160 layoffs, according to Bobby King, director of communications for the president. Thomas Enders, special assistant to the president, said enrollment numbers are not as bad as the school initially anticipated.

Enders said that enrollment on the first day of school was down 5.3%. Final Fall enrollment figures won’t be known until the add-drop period ends on Sept. 14.

Enders said the entire academic year’s enrollment won’t be known until the spring due to the revenue risks, and that while students have been encouraged to drop their classes before the semester if they are not planning to return, there’s no way of exactly knowing this information yet. In an average school year, the university unenrolls about 700 students for non-payment, but students can immediately re-enroll if they desire, Enders said.

Enders identified a 16% decline in new transfer students as the most impacted enrollment demographic, specifically citing this year’s incoming freshman class. As of now, 0.3% of continuing students (66 students) did not return, and about 60 agreed to a deferment plan, while graduate student enrollment remained steady.

“If we risk it on an optimistic enrollment number, we do save more staff positions now, but we are pushing a potential problem just down the road away,” Mahoney said. “We’re gonna have to do even more work this year. It’s a trade-off. My heart of course wants to save positions, which is why I want to hear from all of you — I have to make that decision this week.”

The administration is using roughly 35% of SF State’s reserves, which total $7.8 million, to help fund this academic year. Mahoney said that while she’s been advised to not use over 25%, considering that this school year will not generate much carry-forward money, she is willing to adhere to the UBC’s request of 35% — but no more. Doing so would put the school in a vulnerable position in the event of an unplanned emergency, she said.

“The only thing –– and I hate to say this out loud –– that hasn’t happened in 2020 yet has been a significant earthquake. We have had a flood in one of our buildings while we’ve been shut down, so we squeeze the reserves as much as we can.””

“We have got to be prepared for the unknown, both in terms of persistent budget cuts and also in terms of campus emergencies,” Mahoney said. “The only thing –– and I hate to say this out loud –– that hasn’t happened in 2020 yet has been a significant earthquake. We have had a flood in one of our buildings while we’ve been shut down, so we squeeze the reserves as much as we can.”

The reliance on reserves is of even greater importance to the school, as Mahoney announced that Gov. Gavin Newsom will continue to cut the budget at the UC, CSU and community colleges for the 2021-22 academic year. This would mean starting the next school year with a deficit.

SF State has used the salary savings, reserves and carry-forward money under pre-pandemic conditions to fund the curriculum, which Summit said has always exceeded the university’s budgetary capacity. The effects of the pandemic are stretching this money thin, and the university is both being forced to make cuts for the current year and beginning to look at how to fund the 2021-22 academic year, Summit said.

“Academic Affairs is having to use its own diminishing reserves in order to cover the curriculum. So just to give you an idea, this year we are having to use $6.7 million of carry-forward in order to fund our curriculum,” Summit said. “That leaves us with a frighteningly small number of reserves for next year — certainly much less. This informs my own urgent sense that we need to rethink and revise the way that we deliver our curriculum because our source of funding will have been depleted by the end of this year.”

“Fewer layoffs will also mean fewer resources that we have available for critical areas like operating expenses or, most of all, funding the curriculum. So it gets back to Jeff’s point for the urgent need for discipline in order to really identify where can we create permanent savings that don’t come from layoffs,” Summit said.