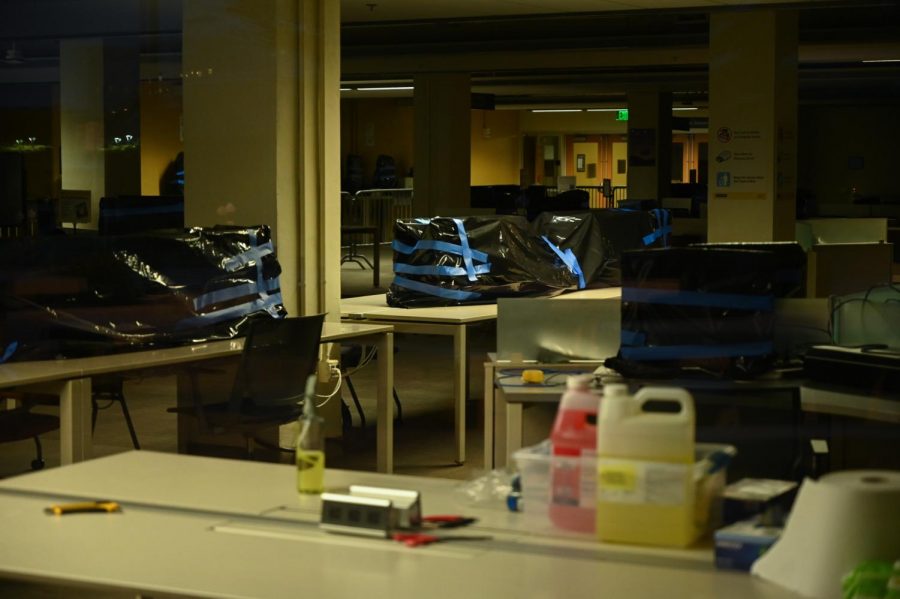 Computers at the study commons inside the J. Paul Leonard Library at SF State are covered and taped with black trash bags to protect them from contamination on Aug. 25, 2020 in San Francisco. (Dyanna Calvario/ Golden Gate Xpress)

SF State technology administrators are shifting gears to resolve an increase in technological issues experienced across the college as classes go online, such as phishing and a lack of the necessary technology to attend class.

While many students have the necessary equipment to move school into the bedroom, some do not. Gone is the reliable access to 24-hour research commons and computers once afforded to them by an open library.

“I see people just say, ‘I’m trying to do all my courses on my cell phone right now,’” Chris Novak, head of Library Information Technology, said.

As an administrator tasked with resolving technology issues, Novak has seen an increase in staff and students who are struggling to address issues arising from the collegewide transition to online classes.

Before the pandemic, the J. Paul Leonard Library processed anywhere from 200 to 400 short-term, 4-hour laptop loans per day, along with a few 30-day checkouts. “The demand has always been there in one way or another,” Novak said. With remote learning, the library has switched entirely to an extended checkout model, with students now able to borrow computers for the entire semester.

To handle the increased demand, the library was granted a $99,000 increase to its instructional equipment budget from 2019–2020. This allowed the library to buy 76 additional MacBook Pros and 250 PC laptops. According to Novak, there is currently a surplus of approximately 250 laptops available for students to request. “We want to make sure that students really know about this resource and they take advantage of it,” he said.

In order to keep students safe, new sanitation protocols have also been implemented. Novak explained that before shipping any computer out, it is scrubbed with a combination of alcohol and hydrogen peroxide.“This is actually with my staff wearing full PPE, like gloves, a hazmat suit and mask,” Novak said. “And then when [laptops] come back, we kind of reverse that.”

Another one of the school’s main concerns today is phishing. According to Nish Malik, associate vice president of Information Technology Services, they saw a thousand phishing attempts in the first week of class.

“Security is absolutely paramount,” Malik said. “So we want to increase our awareness on that.” To that end, ITS has already implemented multi-factor authentication for staff, with plans to expand it to faculty and eventually students. “A number of CSUs have already done that, and that has significantly proven to reduce the data flow or the breaches that some of the campuses have seen. So that’s where we want to go.”

Beyond security, one of ITS’ focuses has been reliability. Scott Nemes, senior director of service management, sees this as a big difference in how the department’s role has changed.

“[The] campus network’s pretty solid, […] but when people are remote, it’s tough to know what their connectivity situation is,” he said.

As other parts of campus migrate to an online setting, one area that ITS wants to focus on is health services. According to Nemes, ITS has partnered with Student Health Services to provide students telemedicine in the forms of remote counseling and psychological services. “We’ve all spent a lot of time making sure that students are going to be well informed.”