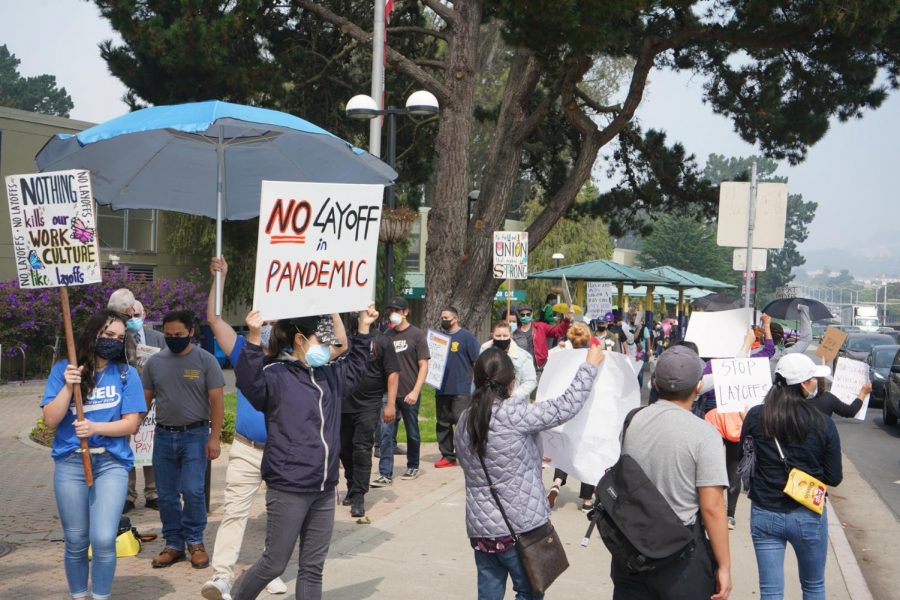 An estimated 60 members of SF State’s faculty and staff held a demonstration in front of campus on Sept. 12, just days after President Lynn Mahoney announced layoffs for 131 employees of the university.

Picketers carried umbrellas and signs calling for California State University Chancellor Timothy White to use the university system’s $1.5 billion surplus. The surplus was revealed to the public in a June 2019 California state audit, which stated that the Chancellor’s Office failed to publicly disclose the funds that accumulated from fiscal year 2009 through FY 2018.

One of the three purposes of the surplus is to pay operating costs “during times of economic and budget uncertainty,” White told the state auditor last year.

Adam Paganini, who works as a graduate program coordinator for SF State’s marine science department in Tiburon and is a member of the CSU Employees Union (CSUEU), said the pandemic is as good a reason as ever to use the surplus money.

Paganini, whose layoff termination along with the other laid-off staff members is effective Nov. 9, said the university is sending the wrong message to workers.

“This is an economic downturn. [There is] a pandemic, and there’s civil unrest in the streets, mass economic anxiety from society right now and no one knows what’s going to happen next,” he said. “When you cut workers off like this during this kind of a time in history, you are dooming them not only to economic despair, but it’s a pandemic. They’re going to lose their health insurance.”

Blanca Missé, who works in the modern language and literature department in the French program, said that faculty is in solidarity with staff and won’t stand idle as co-workers are being laid off.

“Before laying off or taking furloughs for staff or faculty, we need to have full budget transparency, and we need to chop from the top,” Missé said. “If someone needs to go here, it is the top administrators because top administrators have been growing and growing, and the tenured density has been decreasing.”

Missé, a member of the SF State union chapter of the California Faculty Association, added that the unions represented at the demonstration were united in opposition to the budget cuts and the handling of the economic disaster, with the belief that their union contracts would be honored.

“Our understanding is that if they are going to carry out layoffs, they should follow to the letter our labor contracts,” she added. “There are a lot of steps before you lay off, and we want to make sure the contract of our fellow union co-workers of the staff is being respected to the letter. If not, we are going to take action.”

According to Mahoney in an interview with Xpress last week, the layoffs by the administration have been within the parameters set by the union.

“The process is driven by the collective bargaining agreement for staff,” Mahoney said.

The event, which began with participants caravaning from the Stonestown Galleria parking lot and circling the campus multiple times, established a picket line at the corner of 19th Street and Holloway Avenue. Among the participants was a coalition comprising members of the CSUEU, the CFA and the Teamsters Local 2010 unions.

Nick Wirz, labor representative for CSUEU, said the union began brainstorming ways to take action once it became privy to a potential layoff announcement last week. He later told Xpress that the union is working on filing a grievance related to the union contract, which may be ready as early as the week of Sept. 21.

“After the layoff notices were issued on Tuesday, we immediately jumped into action,” Wirz said. “We have a campaign that’s going to be several weeks long — just doing a picket today won’t stop the layoffs.”

Wirz said that the Sept. 12 demonstration was the first step in sending a message to the CSU, with further negotiations of the impact of the layoffs scheduled Oct. 8.