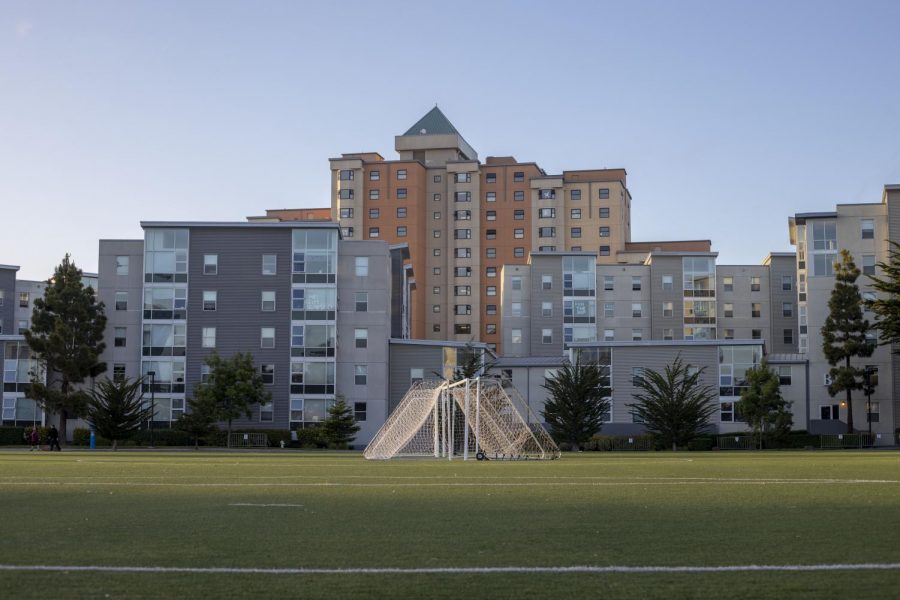 Among the priorities slated for implementation in the coming months are: the improvement of hiring practices, bolstering support for Black student clubs, anti-racist student programming, and the development of more scholarship resources. (Emily Curiel / Golden Gate Xpress)

SF State’s Black community is set to receive a bevy of new programming that is designed to create educational and economic equity on campus, according to a working document authored by the administration and obtained by Xpress.

The document is a timeline for the implementation of the Black Lives Matters initiatives President Lynn Mahoney announced in June. Organizers of July’s Open Forum for Black Students were successful in obtaining the timeline after a robust dialogue between Black students and the administration yielded a commitment for concrete details. Some of the action items discussed at the forum included reallocating funds from UPD, increasing mental health resources tailored to Black students and building more pipelines for Black student success.

The timeline lists items such as employee and student workshops that address white supremacy and anti-Blackness for Fall 2020 goals, which are presently underway. Among the priorities slated for implementation in the coming months are: the improvement of hiring practices, bolstering support for Black student clubs, anti-racist student programming, and the development of more scholarship resources.

The furthest the document goes is Spring 2021. Priorities expected to be in production then are: ongoing outreach and recruitment of Black undergraduate and graduate students; review and restructuring (where possible) of processes related to Title IX; and faculty development for “pedagogies for inclusive excellence.”

Ja’Corey Bowens, Associated Students Ethnic Studies Representative, approves of the administration for delivery of the timeline and transparency at a follow-up meeting earlier this semester.

“[The administration] seemed very receptive to the results of the forum, and it’s actually nice because we now have the document,” Bowens said. “It tells you who’s working on what, and what that exactly entails and when it will be completed by. That was very transparent of them to do.”
Current and New Programming on the Horizon
To its credit, the administration is “developing new programs that strengthen the pipelines to graduate education and careers for Black students.”

At the Sept. 2 Associated Students Board of Directors meeting, Interim Vice President of Student Affairs and Enrollment Management Beth Hellwig announced the creation of a men of color student mentorship program. The reason the administration decided to create this program is to boost efforts in the categories of retention and graduation for male students of color.

“Unfortunately, many of our men of color were not at the same level [of retention and graduation],” Hellwig said. She explained this was the impetus for the “need to put some resources into that particular program.”

Visible programming already in production as part of the BLM agenda includes: graduate school writing workshops sponsored by the Black Unity Center; a book club focused on anti-racism; and a series of roundtable discussions that aim to “address the current challenges impacting our communities.”
Stewards of Mahoney’s BLM agenda
Nokriko Lim-Tepper is at the helm of tracking progress of the university’s BLM agenda. “NLT,” as she is referred to in the working document, is the defacto choice for this role by virtue of her job as interim chief of staff to President Mahoney. She has been working closely with members of the administration, including Assistant Vice President of the Division of Equity and Community Inclusion Frederick Smith.

“My part in this collaboration with Dr. Smith has been keeping our campus community and the individuals who are tasked to implement these initiatives on target,” Lim-Temper said.

As to the nature of her method for ensuring success of the BLM agenda, Lim-Temper has opted for individual check-ins with members of the group, as opposed to large meetings.

“I’m doing this one-on-one just to ensure there’s consistent communication with the people who are tasked with implementing the initiatives,” Lim-Temper said. “[The working group is] not so much a committee as it is individual partners. There’s at least eight to 10 members that I’m consistently checking in with.”

While the administration has outlined ambitious goals, such as “improving our hiring practices for faculty, staff and administrators to include anti-bias education and other best practices to ensure more diverse pools and hiring,” it is just as important to students that Black members of the administration are helping to move the president’s agenda forward on their behalf.

Whitney Holmes, executive assistant to the president of AS, is one such student who expressed strong feelings about the need for Black administrators working to advance the university’s BLM agenda. Holmes said that the administration is up against a “beast” of a challenge, and that the makeup of the group working to overcome that challenge should represent the variety of socioeconomic backgrounds within the Black student community. According to Holmes, being Black is just the threshold for meeting the need. How effective an administrator of color can be is linked to their upbringing.

“You’ll have the person that was a Black person of privilege, who never really understood the Black struggle other than their skin being black,” Holmes said.

According to Lim-Temper, the number of “individual partners” who are Black are few, if any.

“I would say maybe one that I can just skim through my list right now,” Lim-Temper said initially.

In a response to a follow-up email asking for clarification on demographic data of the administrators advancing the BLM agenda, she had this to say:

“This work is happening across the campus and involves individuals representing every division of the University. We personally have spoken to about half a dozen Black administrators about this initiative. For us to be successful, we’ll need to continue engaging the entire campus in these conversations and commit to action.”

Interest such as Holmes’ in the diversity of the team pushing the president’s agenda forward is warranted. According to an article published by the eJournal of Education and Policy at Northern Arizona University, the matter of diversity within higher-education is essential to overall institutional success.

“A substantial body of empirical research confirms that leadership diversity is beneficial to the learning, growth, and development of the institution as a whole,” the article states.
UPD
Vice President for Campus Safety & Chief of Police Reginald “Reggie” Parson, who is the sole Black member of the campus police force, said that November is shaping up to be an active month in terms of the president’s goal of “reviewing and revising university protocols related to policing.”

“Around November we’re actually going to do a department review. We are going to have a panel of two chiefs from outside the CSU system to do a review of our department to look at all of our protocols, procedures and policies to make sure we are doing the best we can to serve our campus community,” Parson said.

Regarding the reallocation of “funding from policing to ensure continued support for campus programs that support BLM and anti-racist initiatives,” Parson went on to describe “substantial” funds resulting from a decision by the administration not to fill eight officer positions. (UPD officers make $80,000-$90,000, not including benefits.) He described the positions that will go unfilled as a “significant staffing deployment” and a “hit” to the UPD force.

“With the current situation that we’re in with the pandemic and remote work, we don’t have the normal daytime population here on campus. So it’s okay for us to do this [reallocation of funds] for this period of time,” Parson said.

Both Parson and Hellwig clarified that once in-person instruction resumes, there are “no guarantees” as to whether or not the reallocated funds would be recovered by UPD.
Warranted Skepticism
While timelines and transparency are a meaningful gesture to Bowens, he expressed that the real test of the administration’s resolve to uplift Black student success lies in making good on its promises.

“In terms of what was promised, it all sounds good,” Bowens said. “We have to see if it’s actually going to happen.”

Within weeks of obtaining the administration’s timeline, a divergence developed between what was promised to Black students in the working document and what is being delivered.

However, at the Sept. 2 Associated Students Board of Directors meeting, Hellwig announced that two counselors were on the horizon, but only one would go to CAPS. According to Hellwig, the other would go to the dean of students’ office to help “coordinate from there.”

“We are going to be hiring two counselors,” Hellwig said. “We’re very excited about that. One of them will be housed in the dean of students’ office, and will be helping with the dean on-call program, and to help coordinate, so I was so happy to let you know. I think that’s been something you all have been advocating for, and we’re happy about it.”

Bowens was surprised at the change in plans.

“At first it was told to us that we’re getting two counselors for CAPS,” Bowens said. “This [Hellwig’s announcement] was the first time we had heard about that. We’re going to have another conversation with them about that because that impacts what we thought was going to happen.”

Hellwig responded to clarify the change in a follow-up interview.

“Just to clarify, they’re [counselors] both in CAPS. We’re trying very hard to have people that have worked directly with students of color, and especially Black students. That is where we are right now on trying to hire those two individuals, both with CAPS, but one also working with the dean on-call program,” Hellwig said.

How effectively two new counselors will work to meet the mental health service needs of Black students remains unclear. Bowens looks at the issue of access to mental health services based on his experience as a residence assistant. It is in this role that he meets a stream of students seeking help and answers to the challenges posed by a university system that struggles to meet the needs of Black students.

The administration believes that it is making good on its commitment to changing the course of experiences Black students have on campus, but that there is still more work to be done. Hellwig had the following to say when asked what grade she would give the administration on its efforts.

“I would give us a B for our many important efforts to contribute to Black Lives Matter [agenda] at SF State. [Previously] When I said A, it was because there is a tremendous effort, but as I thought more about it, we still have much work to do,” Hellwig said.