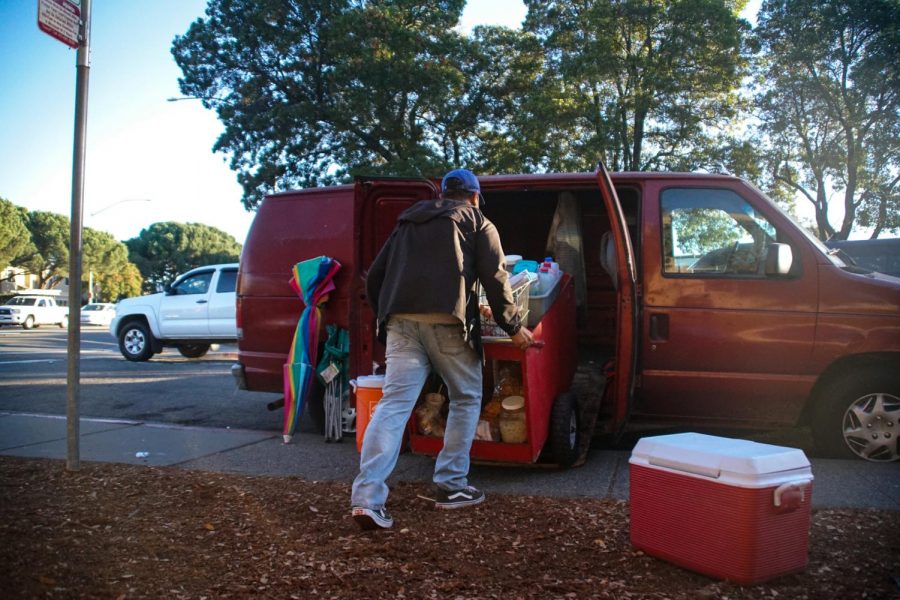 Miguel Sanchez rolls his cart into his van in San Rafael, Calif., after finishing up a four-hour work day on Oct. 17, 2020. (Ricardo Olivares / Golden Gate Xpress)

Eloteros, otherwise known as street corn vendors, are among the working class who do not have the option to perform their work remotely from home during the pandemic. The streets of Canal are regularly filled with one to five eloteros at a time around the neighborhoods.

According to the Marin Health and Human Services, Marin County has reached nearly 5,000 total COVID-19 cases as of Friday. The data shows the Canal area in San Rafael as the community most impacted by the rise in cases. Canal is a community of color, largely comprised of low-income immigrants who are Latino. Many in this working-class area of San Rafael do not have the option to work from home.

Brothers Edwin Graciano, 19, and Ulises Graciano, 22, are among the eloteros who consistently work in the Canal neighborhoods. They live in Richmond and cross the Richmond-San Rafael Bridge in order to sell in the area. For them, business in the Canal area is their most stable location because they can sell almost year-round compared to events like concerts, soccer games or the Blue Angels showing.

Edwin recalls that at age eight, his father sold fruit as a means to support his family. Edwin was too young to stay home alone, so he would often go to work with his mother and father, who were both street vendors.

Edwin stated that he went on to become one of the youngest eloteros that worked with his father to work alone at the age of 12 in 2013, he recalls selling by himself at parks in middle school.

Edwin credits his father for helping him and his brother get started in the street vendor business at an early age.

“I was just used to it, I was working with my dad. I started to get the hang of it, we would help out my dad fill up chilis. He would give us money off of that. We would save that up,” Edwin said.

Edwin recalled being “hella happy” when he would get paid to help his parents with their stands.

The Graciano brothers recently teamed up to start El Carrito Rojo, The Little Red Cart. Their plan for the branding is to unify and make themselves recognizable.

According to the U.S. Census Bureau, the city of San Rafael in Marin County is 31% “Hispanic or Latino” and 67% white. In San Rafael, the majority of the Hispanic community lives in the Canal area, reported by a UC Berkeley Case Study on the Canal area in 2013. This is where the Graciano brothers sell a large variety of Mexican treats. Their menu ranges from elote which is street style corn with mayo, cotija cheese, and chili powder; homemade potato chips; chicharrones, which are pork rinds; and raspados which are shaved iced topped off with flavored syrups.

The Graciano brothers have deep ties to the community where their business is located. This is demonstrated by the customer base they have been able to cultivate over the years.

“We already have a large clientele [in San Rafael], all of my clients know all of us. They will come looking specifically for me, my brother or sometimes my dad,” Edwin said while handing out his personal phone number to a customer so the customer could know what days he was working. “We just have people that know the quality of the merch we give out.”

El Carrito Rojo is in the Canal area four to six days out of the week. Including prep time, the brothers spend eight to 11 hours working in a single day.

“[Some people] don’t really understand the work that gets put in behind the scenes,” Ulises explained. “If they knew how long it takes to fill a coconut shell, open it, rinse it and cut all the bad pieces out, one coconut can take five, eight or 10 minutes.”

While selling elotes is not a science, the brother said doing so amid a pandemic requires a hefty amount of knowledge on the impact COVID-19 is having on the local community. El Carrito Rojo is not alone in struggling to weather the unfavorable business climate of an economic downturn, which is sustained by the ongoing pandemic.

Canal Alliance, a nonprofit organization that provides the community with legal aid, job skill courses and immigration and educational support, has been an advocate for the community through its Emergency Fund.

Omar Carrera, CEO of Canal Alliance along with other affiliated groups, lobbied local officials by expressing the impact COVID-19 is having on the community. In a letter, Carrera asked officials to declare a state of emergency in the Canal neighborhood.

Canal Alliance could not be reached for comment in time for publication.

The Graciano brothers have felt the effects COVID-19 has unleashed on the community in which they run their business. Edwin said earnings were nearly cut in half because not as many people were out shopping. He described every day since the pandemic started as feeling as if it were the end of the month.

“It feels like the time that most adults have to pay rent. It’s basically how it felt like everyday during the pandemic,” Edwin said. “It just felt slow, nobody wanted to come outside. It was lonely.”

Ulises also noticed a surge in prices for supplies needed for his business.

“Before the pandemic started, the good season was coming. Summer is when the watermelon turns out good and the mango comes out good and ripe,” Ulises said. “That’s usually when a lot of the pieces on the merchandise go down [in price], so it’s cheaper to afford and make more profit. Once quarantine started a lot of things went up.”

The Graciano brothers said that the price for boxes of mangoes went up from $6 to $11. The price for cups jumped from $30 to almost $60.

As stores place limits on the purchase of certain products amid the pandemic, it has made it harder for vendors to obtain large quantities of certain items.

Their father, in addition to selling street corn, started to sell food out of his home since quarantine started. Edwin also started buying and reselling shoes as a side job in order to be able to make the same income he was before quarantine.

The brothers expressed their resolve in continuing their work, as not much aid has been given to people like the Gracianos.

“Most people are getting stimulus checks and help from the government. We don’t have that,” Ulises said.“I have no other choice but risk my health and try and find some financial income.”

Ulises said that his age and marital status, or lack thereof, is an advantage. Unlike other eloteros who have families, he mostly has to worry about providing for himself and helping his brother keep their business afloat.

Similar to everyone else, their bills have not stopped coming. As they continue to work outside they hope the community is able to acknowledge the work they do, and help keep them financially stable.

If you live in the Marin County area, COVID-19 testing sites can be found on the Marin Health and Human Services website. For those living in the Canal neighborhood, Canal Alliance on Larkspur Street offers COVID-19 and other resources.