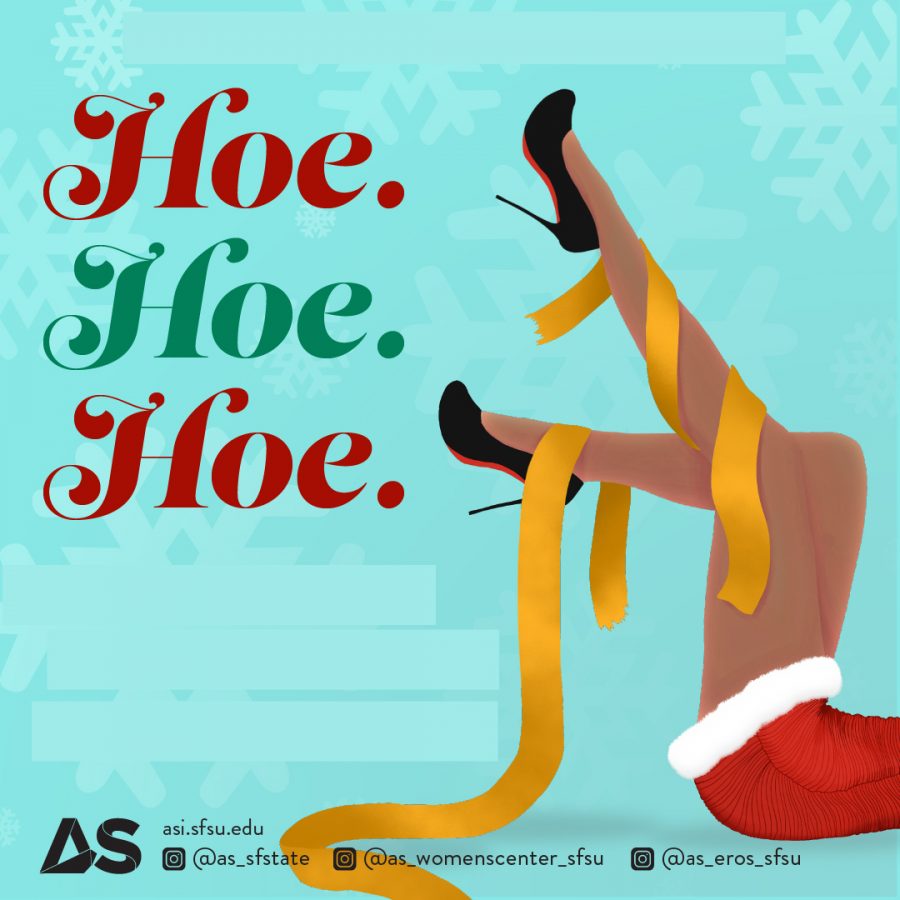 This year's Hoe Hoe Hoe promotional flyer also served as a conversation started at the event. The drawing depicts legs dressed in the skirt, often the subject of slut-shaming and a broken ribbon to represent breaking the stigma of the word slut. Photo courtesy of Associated Students.

What started as a mischievous play on words is now an annual open forum on a deeper social topic: slut-shaming. On Dec. 1, the SF State Women’s Center and Education and Referral Organization for Sexuality co-hosted the third “Hoe Hoe Hoe,” a holiday themed event where students have a discussion prompted by the word “slut.”

Lucya Alvarado, assistant director at EROS, came up with the event three years ago when she was an intern at the organization. Alvarado said she wanted to create an environment where students could talk about stigmatized topics, particularly related to sexuality. And Hoe Hoe Hoe was all too perfect a name for it.

“There was a lot of people in my life who were being affected by slut-shaming and slut-shaming culture,” Alvarado said. “Also, sex being taboo plays a big role in slut shaming culture. I like to hear people’s experiences and their relationship with the word.”

The discussion during the forum brought up questions such as: Why is sexual agency considered a negative thing? If sexual agency and wellness are positive, does the word slut still have a purpose? Are we ready to use slut as an empowering word?

A slut is defined by Merriam-Webster as “disparaging and offensive: someone who has many sexual partners. A word usually used toward a woman.” Participants’ definitions of slut varied; some said it’s a word used to shame women who take agency of their bodies. Others said a slut is a woman who has multiple sexual partners, a fact neither positive or negative. There was a consensus, however, that the word carries a negative connotation, regardless of its multiple interpretations.

Writer Soraya Chemaly, known for her work about gender roles and social justice, defined slut-shaming as “embarrassing, insulting or otherwise denigrating a girl or woman for her real or extrapolated sexual behaviour, including for dressing sexually, having sexual feelings and/or exploring and exhibiting them.” Specifically, “in a way that you wouldn’t do if she was a boy or man.”

Participant Marianna Lira uses the word slut to describe a woman who is taking control of her sexual narrative. This could mean someone who chooses to engage in sexual interactions, have multiple sexual partners, or neither at all.

Lira said that the word is used to shame women regardless of its various definitions. They recalled meeting a man on a night out with friends on their birthday who called them a slut after they repeatedly refused to have sex with him.

Women’s Center Assistant Director Julie Caliston said that the conversations at Hoe Hoe Hoe have helped her develop a positive understanding of the word, but that she has still been slut-shamed for being open about her sexual experiences.

“I’m a bisexual woman, and I’ve been with a couple of people in my past, and then I’m open about it,” Caliston said. “So it’s really easy for people to be like, ‘Oh yeah, she gets around.’ So not exactly call me a slut, but obviously make those innuendos.”
Women’s Center Assistant Director Julie Caliston on destigmatizing women’s sexuality.

Although the event started by examining the stigma or empowerment of being a “slut,” it also took a more serious turn, bringing up topics like sexual assault, mental health and systemic violence. Historically, sexual violence was used to enforce systems like colonialism and racism, and today, part of how that lives on is in the form of slut-shaming culture.
Women’s Center Director Haley Fonseca talks about the hyper-sexualization of girls and women of color.

Noor Baig · Haley on hyper-sexualization of women of color

Women’s Center director Haley Fonseca said that although the event is about empowering women using a word that has been used to shame them, it can also be a learning space for allies.

“We have had some male students get a little emotional about it, or kind of deconstruct in their mind like, ‘Why is slut a bad word in my mind?’ or ‘How am I slut-shaming, whether it’s intentional or not?’” Fonseca said.

Caliston gave simple advice on how to use a word with an evolving definition: “You can either redefine that term, don’t use that term, or you can destigmatize it and start a different conversation as to why that term is so bad.”