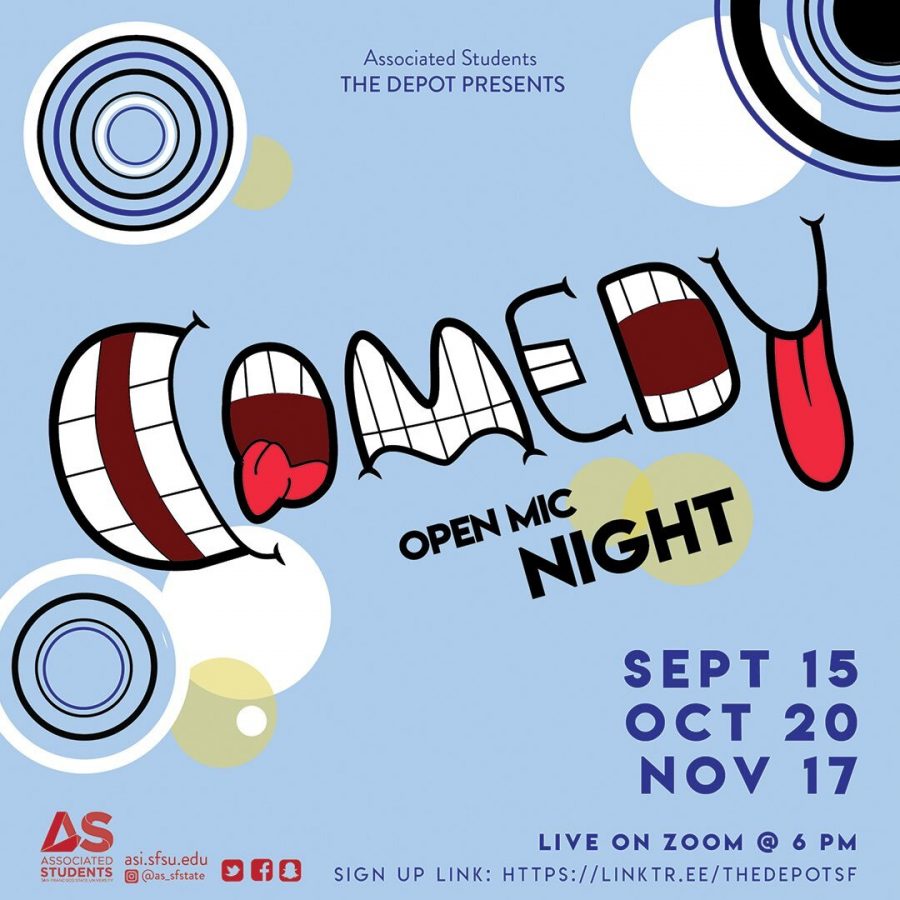 SF State’s live event venue The Depot experienced its first virtual comedy show via Zoom, on Sept. 17. The Depot, located on the lower level of the Cesar Chavez Student Center, typically held comedy nights once a month on Thursdays at 6 p.m., with all Depot-held events free of charge. (Associated Students)

The comedy night at the Depot started just like a usual Thursday night show but with one key difference: this time, it was on Zoom.

SF State’s live event venue The Depot experienced its first virtual comedy show via Zoom, on Sept. 17. The Depot, located on the lower level of the Cesar Chavez Student Center, typically held comedy nights once a month on Thursdays at 6 p.m., with all Depot-held events free of charge.

For many, including The Depot manager Paloma Aearca, the comedy show is a safe place where they can get in a few laughs and have a creative outlet. Though the event itself, just like everything else on campus, has moved to being held virtually, The Depot still wants to facilitate that fun atmosphere for students to decompress after a long day of classes.

“It’s a time to just disconnect from everything, just sit there, and share some laughs with everyone that attended the event,” Aearca said.

Prior to remote learning, The Depot would offer sign-up sheets for prospective comedians to sign up the day of; now, The Depot offers sign-up sheets online, where students have to write in ahead of time so that Aearca can prepare for the number of attendees.

The Sept. 17 event began with introductions and a rundown of how the now-virtual show would run. Each performer had seven minutes to perform, just like during regular shows. Comedy show host Andrea David then started it off and allowed the first stand-up of the night, Michael Satumba to begin his set.

Satumba began his stand-up career in October of 2018, that same month he performed at The Depot. Before the pandemic, Satumba would perform twice a month for Comedy and Broken Mic Night. He proceeded busting out a few jokes and the audience could see the silent smiles and noiseless laughs of their fellow audience members trapped behind screens despite microphones being off.

To prepare, Satumba generally works on his material for at least 10 minutes daily. This way he can have it become a daily habit he can adhere to. He explained the difficulty of virtual stand-up and of not being able to see if a joke lands for the audience or not.

“Weirdly enough, I think I get more nervous during the Zoom mics versus in person because, I don’t know, I think I look at myself too much. It’s a completely different thing,” Satumba said.

Satumba explained that for a virtual stand-up show he is at the very center of the audience’s screens, with there also being a greater level of expectancy from the audience. Whereas during live performances people had the choice to casually walk out or be on their phones.

“You’re like in the center of the screen and everyone can see you,” Satumba said. “Versus during live performances some people would just leave or some just on their phones and Zoom mics they’re there and they’re expecting to laugh and if you’re not funny, it’s painful.”

In between each comedians’ performance, David would share her Tinder dating profile and asked audience members to help spruce it up or roast her profile page. Involving the audience that much more into the show.

“Some people feel like they can’t do comedy during a time like this,” David said. “I mean you can’t really replicate the feeling of being in front of an actual crowd … . but Paloma is already doing a good job on making everything virtual.”

Caleb Lally, the second and finalstand-up of the night, had a long array of jokes ready to tell. Those with The Depot are still figuring out how to run virtual events, which allowed Lally to run a set longer than the allotted seven minutes.

“Now that we know how to go about marketing and whatnot a little bit better. I feel like moving forward, these events are just going to grow,” Aearca said.

The turnout exceeded Aearca’s expectations, who explained how shocked to see 20 extremely interactive attendees, she only hopes that future events continue to improve.

“I know that there’s thousands of students at SFSU, but still, for this being the first virtual comedy night and for it just being as interactive as it was, I was very proud of that, and I feel like it went good,” Aearca said.

With The Depot being physically closed, there is a sense of community and energy that is missed, according to David. David explained how it was different from other comedy spaces, as the demographics present usually understood her humor much more, especially when compared to other comedy clubs.

“The Depot, it sounds cliche but is a place where you can express yourself and have a break from school. It’s just a nice place to destress, have fun and see entertainment” Satumba said.

The next virtual comedy show is set to be on Thursday Oct. 20 on Zoom.