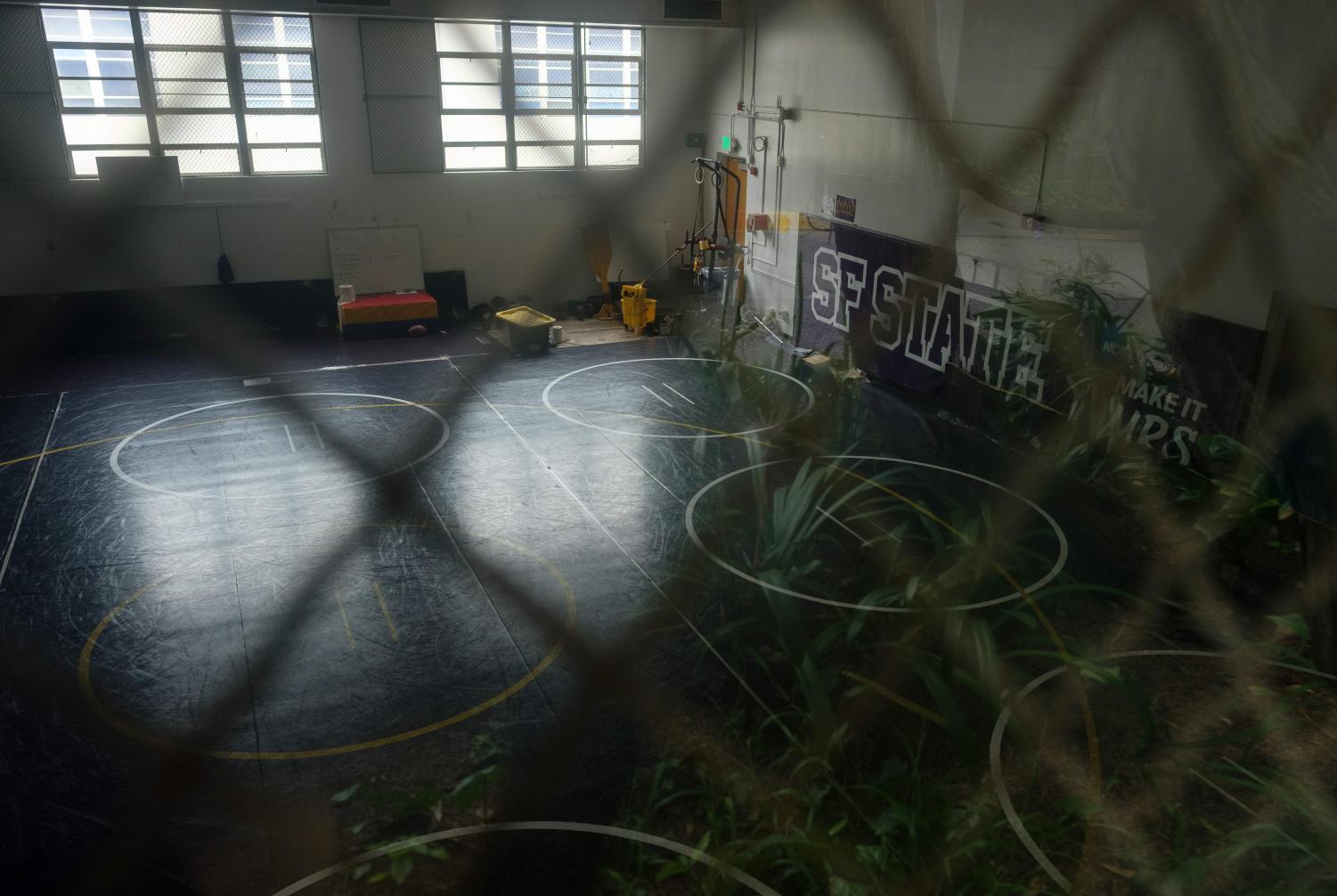 The Hall of Fame inducted wrestling coach that was ‘never too big to do the little things.’

The team, excited — the energy, palpable. But after a day of setup and wrestling, all were eager to shower.

“Hey Lars, everyone left me, everybody left. I need you to help clean up,” coach Alan Abraham said.

“He would always tell us this story every year,” Naveed Bagheri, SF State’s last national champion coached by Jensen, said.

“I was there by myself cleaning up the blood, the sweat and the piss of the whole tournament,” added Marques Gales, who wrestled under Jensen, invoking his mentor’s character, “And I was the star of the tournament!”

Since his passing, members of the larger campus body and the wrestling community nationwide have reflected on the personal impact that Jensen had on the sport, the campus and their lives.

Bryce Schussel, current assistant athletic director for SF State’s Sports Medicine, is one of them.

In 2009, Schussel began traveling with the wrestling team as an athletic trainer; he didn’t know anything about wrestling. However, he said he quickly became passionate about the sport due to Jensen’s infectious love for both wrestling and the wrestlers themselves.

Traveling with Jensen was described to be a religious routine, carefully constructed to set everyone up for success – both on and off the mat.

Jensen ensured his team was taken care of by always booking the first flight out of San Francisco to be the first team to arrive at the tournament, even dining in the same restaurants they feasted at the year prior when visiting the same town.

What Schussel loved was how Jensen always made time for the wrestlers to experience more than just wrestling. When they were in Springfield, they visited Abraham Lincoln’s grave. When in Colorado, if the timing was right, they’d visit the snow.

“He literally just taught me about life,” said Schussel, reminiscing on late nights riding shotgun with Jensen in the driver seat telling stories on trips to the gas station for nothing more than candy and a conversation.

Gales wrestled under Jensen from 2007 to 2010 and had set a goal to become an All-American. This meant that he would have to place in the NCAA tournament – he didn’t. He remembered being so upset before and after Jensen pulled him aside to tell him, “You’re going to be a great coach someday. The future’s so bright for you, don’t be upset.”

Jensen then appointed Gales as an assistant coach the next season during his senior year. Following that, Jensen wrote a raving letter of recommendation for his graduate school application, which Gales said set the trajectory for his career. He is currently an assistant professor of kinesiology and the head wrestling coach at Sacramento City College.

“There’s so many coaches out there that just care about the here and now and what you can do for their program,” Gales said, “but he was very invested in our futures.”

Jensen’s own history as a Gator expanded over the course of decades. According to Intermat, a publication dedicated to wrestling, Jensen ranked as one of the longest-serving college wrestling coaches in the nation.

His 33-year tenure ended abruptly with the school’s athletic director’s controversial decision not to renew Jensen’s contract and instead open his position to the public.

Jensen felt discriminated against due to his age, and was determined to prove that he wasn’t given a fair shot at re-applying for his position. Wrestlers of the time reported that he was called degrading ageist terms, such as “old dinosaur.” So, like any determined wrestler, he geared up for one of his last big battles against age discrimination.

It wasn’t an easy one.

“I know it took a large toll on Lars’ mental and physical health,” Gales said. “He wasn’t the same mentally after that. So it was just a very bitter ending.”

“He wasn’t one of those people that was going to let a situation happen without a lot of resistance,” Gales said. “It’s a testament to his character.”

Jensen’s character was one that inspired so many of his students. His students are now coaches, fathers and members of their communities.

From an outsider’s perspective, walking by the gym and peering in through dirty glass, one might have seen Jensen and his team huddled in a musty gym; deep in conversation, probably talking about technique.

“You know those are the things that, if you ask his wrestlers, are forever lasting — Because I  remember them too,” Schussel said.

When Isaiah Jimenez found out the news of Jensen’s death, he said he broke down and was a complete mess.

Jimenez was recruited by Jensen in high school and began wrestling for SF State in 2009. He served as an assistant coach under Jensen for four years. He recalls typing up recruitment profiles and then having to handwrite them all because Jensen was an old school paper guy and carried them around in his briefcase.

They grew really close during that time. Jensen even let Jimenez live with him rent-free for months, he always had a seat at Jensen’s family dinners.

“Anything I ever needed,” Jimenez said, “he always joked and said that I was his adopted child, his adopted son.”

A ‘stupid Jensen joke’ is what the team would call classic sayings and phrases that Jensen would repeat. One of them was ‘Get tough.’

Jimenez said that after Jensen died, all of those sayings started making more sense.

“I was a mess when I found out,” Jimenez said. “And, I  just kind of thought about him just saying ‘get tough’ cry baby, get over it, you know I’m gone but, get over it.”

Jimenez expressed that it’s easier grieving because the team has always remained close-knit, like a family, even prior to Jensen’s death. Through group chats they are retelling his classic stories, stupid Jensen jokes and precious memories that they shared with their coach.

“He wanted his wrestling legacy to kind of be built around, you know, a family aspect, and you can see that,” Jimenez said. “He is going to be very, very, very missed.”

View Comments (6)
About the Contributors