The Board of Supervisors block the Art Institute’s potential sale of the mural, which holds special significance to the Latino art community 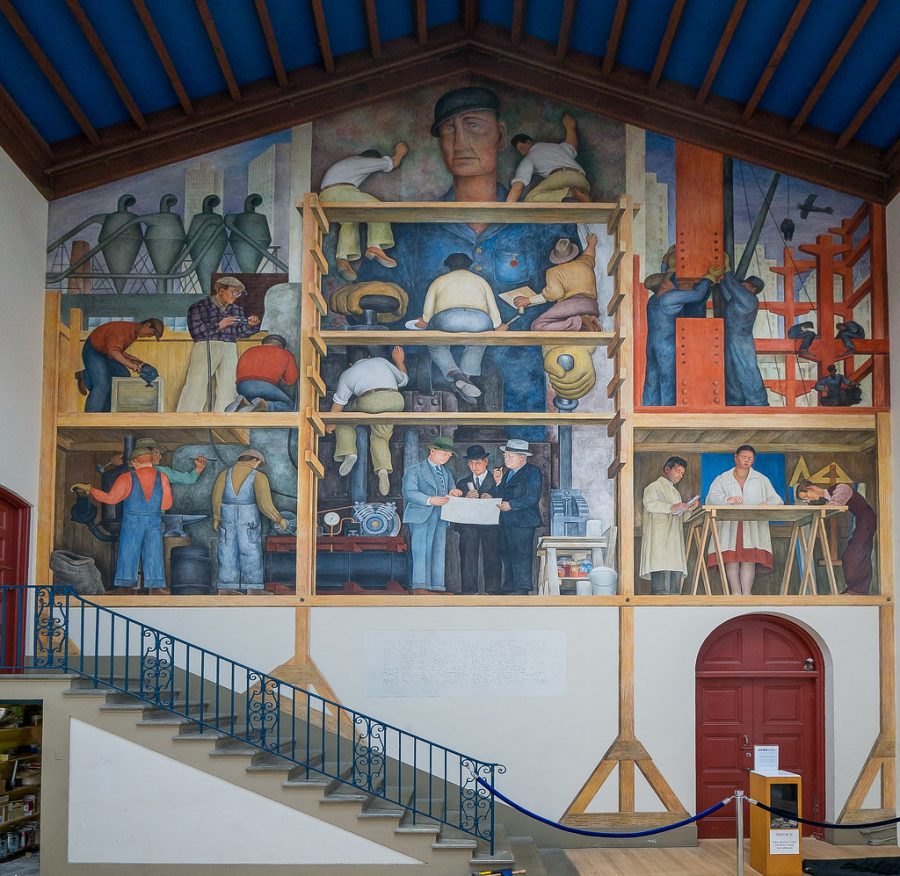 The Making of a Fresco Showing the Building of a City, mural by Diego Rivera, San Francisco. (Jay Galvin / Creative Commons)

“A fresco within a fresco,” as described by the San Francisco Art Institute.

Diego Rivera’s work, which is painted on the wall of the Chestnut Street Campus, depicts the creation of a mural, including artists, architects and engineers hard at work. Rivera himself is pictured, paintbrush in hand, as he sits on a support beam overlooking the scene before him.

“It is one of the great pieces of art for San Francisco,” Supervisor Aaron Peskin, who put the resolution to apply landmark designation to the mural forward, said in an interview with Xpress. “These things should be protected now and forever.”

The mural, titled “The Making of a Fresco Showing the Building of a City,” was commissioned by the San Francisco Art Institute in 1931 and has remained there ever since. At a Dec. 17 meeting, the school board suggested selling the work to George Lucas amid growing financial concerns. The San Francisco Board of Supervisors responded by voting unanimously on Jan. 12 to apply landmark designation to prevent any potential sale. Many felt that the mural was not just the property of the Art Institute, but rather the city’s as a whole.

“I feel like the Diego Rivera mural is not something that just belongs to one institution,” Art Hazelwood, shop steward for the adjunct faculty at SFAI, said. “Although it was painted for the Art Institute, it is really a gift to the city of San Francisco.”

Hazelwood was the first commenter who spoke at the Board of Supervisors meeting in support of the landmark designation because of the work’s significance to San Francisco’s mural movement and overall art history.

In the mural, as Hazelwood mentioned, Rivera is facing his workers instead of the people who funded it, who are directly below him; In this way, he is showing his position as a friend to the working class.

The SFAI Board of Trustees was, according to Hazelwood, “acting secretly, negotiating a deal with George Lucas to rip it out of the building and move it to L.A.,” which he said undermines the integrity of the Institute and the stance Rivera took in the work itself, with him being on the side of the working citizen rather than the side of a white billionaire.

Peskin said, “I think that Mr. Rivera expressed himself through art, I express myself through my political office, but we’re all trying to take care of folks who have the least.”

During the meeting, Peskin also brought up the failure of the school to consult with the Latino and Chicano communities of San Francisco in the discussion about the future of the mural.

Hazelwood raised this exact issue with the board of trustees before the Board of Supervisors meeting, adding that the Latino art community would be offended by their lack of acknowledgment.

“They were only interested in selling it,” Hazelwood said. “They didn’t want to reach out to any community.”

“As a Latino person myself, it’s kind of like they are selling the talent of my culture and the people who I looked up to when I wanted to move [to San Francisco],” Figueroa said.

By trying to sell the mural, Figueroa said that the Art Institute undermined the very reason it was founded, which was as a home for experimentation, free-thinking and expression in San Francisco.

One artist, born and raised San Franciscan Malik Seneferu, felt as though due to the closure of galleries across the city and the attempts of institutes like this to sell off work with historic significance, the city is slowly losing its creative luster.

“I remember, when I was a kid, I didn’t have to go to any other theme parks, because all I had to do was travel around San Francisco,” Seneferu said. “Art in San Francisco is the soul of San Francisco.”

As a muralist himself, Seneferu sees the perpetuity of his art, rather than any potential monetary value,as its most essential aspect.

“I’ve done murals in this city. And I was paid to do that. But it’s not so much the money,” Seneferu said. “What’s important to me is the fact that the art stays there unscathed. Unbroken. Untaken.”

The landmark designation will guarantee that the mural remains in San Francisco for current and future generations to enjoy, reflect on and look for inspiration, which is what Supervisor Peskin anticipated when putting forth this resolution.

“I, as a member of the city council of San Francisco, have the power to make sure that those murals cannot be ripped out of that building,” he said. “And I’m exercising those powers.”