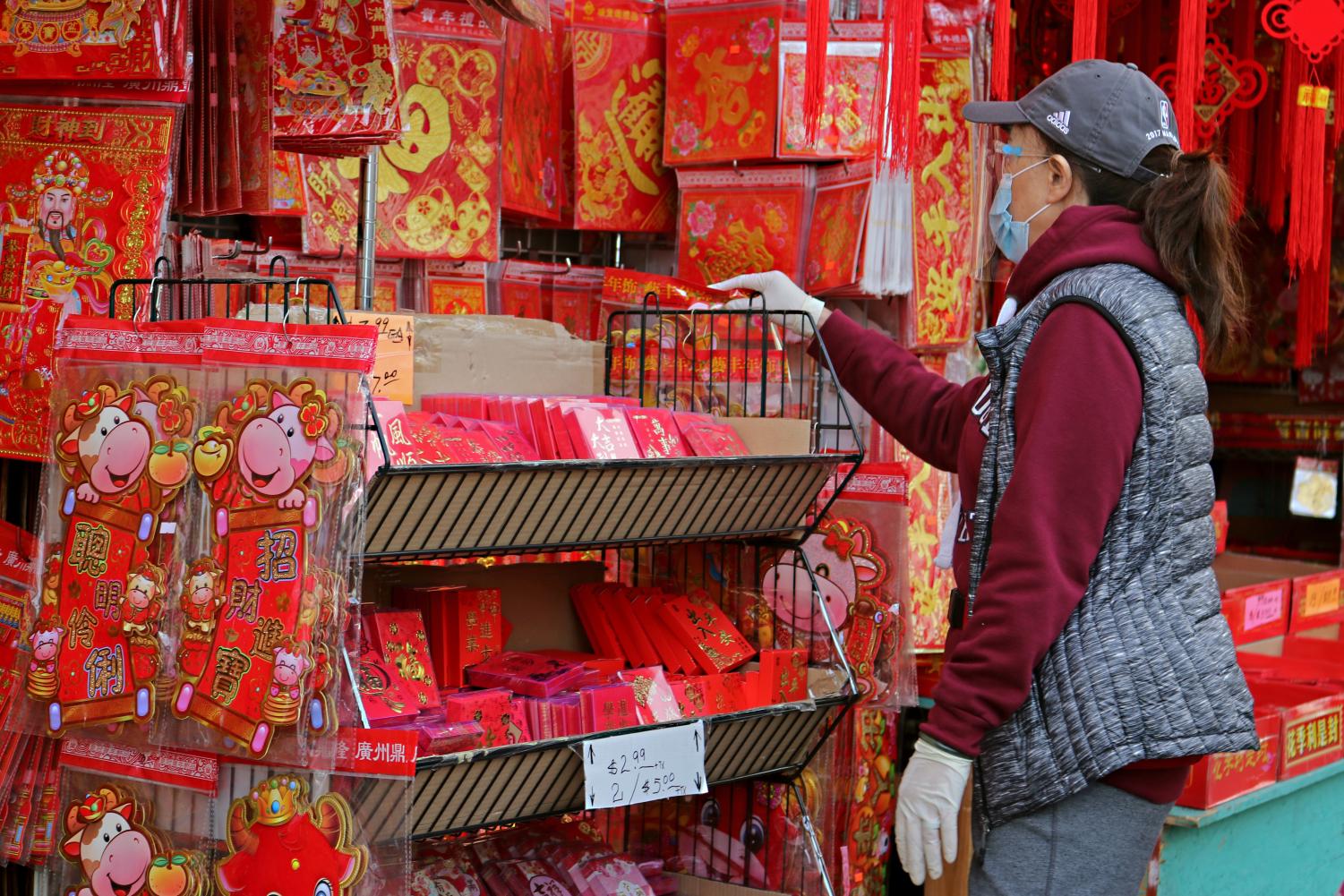 A woman shops in a stall of red and gold decoration items in Oakland, CA., on February 8, 2021, in preparation for the Lunar New Year. (Sabita Shrestha / Golden Gate Xpress) (Sabita Shrestha)

A woman shops in a stall of red and gold decoration items in Oakland, CA., on February 8, 2021, in preparation for the Lunar New Year. (Sabita Shrestha / Golden Gate Xpress)

In recent weeks, reports of violence against elder Asian Americans have skyrocketed

Stores in Chinatown are crammed with roadside stalls of red and gold decorations, mandarins and tangerines, dried ingredients and flowers; the festival is around the corner. The 15-day celebration of the Spring Festival, also known as Lunar New Year, begins on Feb. 11, New Year’s Eve.

But the ambiance doesn’t complement the festive spirit; instead, it’s full of terror.

A 91-year-old man was violently shoved in the ground in Oakland’s Chinatown; 84-year-old Vicha Ratanapakdee died from an unjustifiable attack in San Francisco.

These are some of the incidents that occurred in recent weeks, and the targets were all elder Asian citizens.

Anti-Asian hate crimes and xenophobia have been surging in the Bay Area and in the U.S. since the arrival of COVID-19, and some even blaming the community for the pandemic, including former President Donald Trump who repeatedly used terms like “Chinese virus,” “Kung Flu” and “Wuhan virus.”

In Oakland’s Chinatown alone, more than 20 incidents have been reported in the past two weeks.

Out of 351 COVID-19 deaths in San Francisco, 38% are Asian American residents, the highest of any ethnic group.”

“My first reaction is that it is heartbreaking, gut-wrenching that our Asian elders are experiencing violence, on top of, you know, experiencing high death rates due to COVID,” said Cynthia Choi, co-executive director of Chinese for Affirmative Action, a non-profit organization founded in 1969 to protect the civil and political rights of Chinese Americans.

“They’re obviously very fragile, and not in the ability, you know, not in the position to defend themselves, right,” said Choi about the series of attacks against older Asian Americans.

Out of 351 COVID-19 deaths in San Francisco, 38% are Asian American residents, the highest of any ethnic group, according to the data by San Francisco Department of Public Health.

Russell Jeung, SF State’s professor of Asian American studies, said that there are two trends of xenophobia against Asian Americans. “One is the overall anti-Asian racism that was fomented by President Trump and the Republican Party, and that led to both interpersonal violence and racist policies like mass immigration bans,” he said. “The second trend is the spate of crimes against Asian Americans that may or may not be racially biased.”

The rate of violent crime against Asians raised from 8.2 to 16.2 per 1000 persons from 2015 to 2018, according to the National Crime Victimization Survey.

Choi and Jeung both agree that the numbers of anti-Asian hate crimes and incidents are underreported. They are also the co-founders of the Stop AAPI Hate reporting center, along with Manjusha P. Kulkarni, executive director of the Asian Pacific Policy and Planning Council.

Stop AAPI Hate center was launched on March 19, in response to the surge in anti-Asian assaults and racism. According to the report, it received 2,808 reported incidents of bigotry and discrimination against Asian communities in the U.S. between March 19 and Dec. 31, 2020.

Jueng believes that one of the reasons behind recent multiple media coverage of crimes is the focus and attention of the media on the Asian American community during Lunar New Year.

The increasing rate of attacks and robberies has hurt small businesses in Chinatown, as people are frightened to leave the house, go out shopping and even stroll in their neighborhoods.

Jacob Azevedo, a resident of Oakland, decided to step in after he could no longer sit by and watch the videos after videos of attacks. He called out for volunteers to escort older people in Chinatown and formed a group called Compassion in Oakland. Currently, 158 people have signed up to volunteer, and Azevedo said he is overwhelmed by the support he’s been receiving.

Azevedo also organized a GoFundMe fundraiser to provide personal safety alarms, like whistles, and within 24 hours, it smashed the original goal.

“I figure people run whenever they hear a car alarm, and when they break into it. So, you know, maybe this could somehow be helpful to elderly people,” Azevedo said. “And when it comes to elderly people, your minutes can literally mean the difference between life and death.”

More than five Asian American organizations across the Bay Area, including CAA, teamed up to hold a virtual press conference demanding action against the recent attacks on Tuesday.

“Our resilience is not the reason for government officials to ignore the needs of Chinatown residents and small businesses right now,” said Jing Jing He, a member of the Asian Pacific Environmental Network, in the press conference.

Jueng and Choi are heartened by the amount of support from the communities, elected officials, celebrities, churches and unions, standing up against discrimination and violence.

Under usual circumstances, friends and families would reunite for Lunar New Year, wish each other good health, fortune and luck and exchange gifts, but unprecedented times call for unprecedented measures.

“I am not going to see my, I can’t see my elder, my 94-year-old mom, and she can’t see her great-grandchildren,”  Jueng said. Although that won’t stop him or his family from celebrating New Year. “It’s just like we have Zoom classes, we are having the Zoom Chinese New Year parties,” he said.