"We are sitting, as a society, in a time between trauma and transformation," Dr. Shawn Ginwright said. 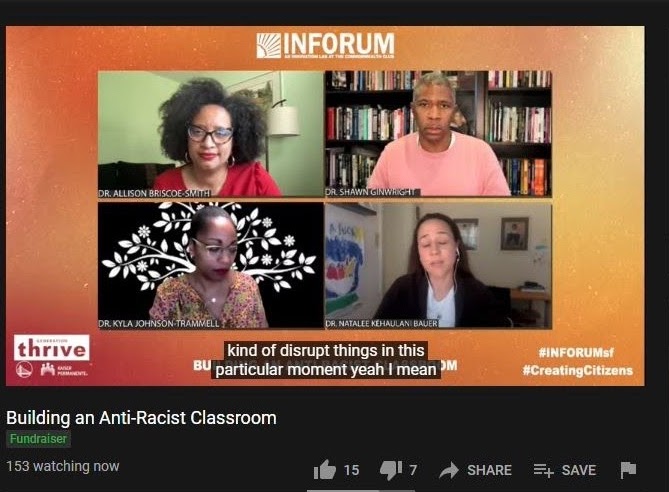 The event emphasized that school districts are starting to recognize the importance of recognizing systemic issues, such as poverty and hunger, and how schools can do their part in helping kids overcome those inequities. (Karla Orellana for Golden Gate Xpress)

Centering curriculum around Black, Indigenous people of color, and recognizing accessibility are necessary steps in combating anti-racism and addressing inequities throughout the education system, according to the Commonwealth Club.

The event’s conversations emphasized that school districts are starting to recognize the importance of recognizing systemic issues, such as poverty and hunger, and how schools can do their part in helping kids overcome those inequities. These issues, according to Johnson-Trammel, have been exacerbated by the pandemic.

According to a study done by the COVID Impact Survey and The Hamilton Project/Future of the Middle Class Initiative Survey of Mothers with Young Children, families with children already living in poverty saw increased rates of food insecurity after the pandemic began because of lack of income.

Therefore, accessibility to food that students would usually get at school becomes an issue as parents will not have access to help needed to maintain their kids, Johnson-Trammel said.

Johnson-Trammell said that despite a number of superintendents being at “fundamentally different levels” of understanding racism, and admits that people will make mistakes, it is courageous to actively combat racism.

“[Superintendents represent a] system made up of people… [trying] to step into a situation [where] you can’t necessarily see how things can look differently, but [know] that the current situation isn’t working.”

Ginwright suggested having 10-minute check-ins for students at the beginning of class to know how they’re doing and allowing the teacher to be honest with them about how they felt to create a sense of community with students. He said this was important to do because it strengthened the teacher-student relationship that is needed to.

This falls under the context of changing course curriculum on a larger level. Los Angeles Unified School District has already begun implementing ethnic studies courses, a requirement for students to graduate. Many argue that having textbooks and material that solely focus on European and Anglo-Saxon history makes BIPOC students feel isolated and unseen.

As panelists, comments in the live chat spoke both highly of the content as well as some criticism.

“Curriculum needs to change so that it’s not dividing everybody by [race, gender and accepting that in absolute truth we are all equal]. You don’t care about actual equality.” YouTube user Big Sammy commented in response.

Ethnic studies, however, is credited by some scholars as being the gateway to combating racial violence.

In addition to teaching how to create actively anti-racist curriculum, speakers voiced a hope to train teachers with a social justice aspect and how to tackle equity through maintaining accommodations made to help students during socially distanced learning and taking that into the regular school sessions.

However, many families are worried about exposure from sending their kids back to school.

Bauer cited her own experience as a mom, saying that many families that are predominantly ready to go back to school are a part of communities that have been largely unaffected by COVID-19 infection rates — typically, wealthier and communities more equipped for precautions — and that merely see the shut-down as an inconvenience.

Bauer said that school districts have yet to figure out how to prioritize students who are already behind as a result of the pandemic before rushing them back into in-person learning.

“If we are to create a society of belonging and inclusion it can only happen through schools,” Ginwright said. “And schools have to be the center point if we recondition the culture and the values of our young people so that they have a different view in how to create belonging.”