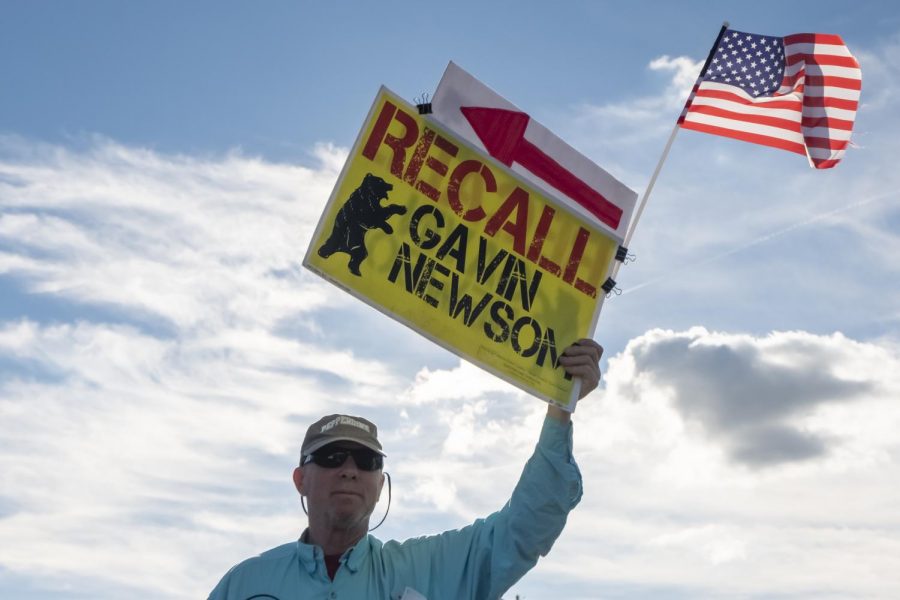 A man holds a sign to direct people towards the petition signing location to recall Gov. Gavin Newsom. He claims “voter integrity” is his primary reason for supporting the cause. (Ellie Doyen / Golden Gate Xpress)

The recall effort toward Gov. Gavin Newsom has made a steady progression toward reaching its goal to qualify for a ballot by the March 17 deadline.

According to California Secretary of State Shirley Weber, as of Feb. 5, almost 1.1 million signatures have been submitted in support for the recall – with about 668,000 signatures being counted as valid so far. In order to qualify for a recall election, supporters have to collect and verify 1.5 million signatures.

The opposition to Newsom began to grow when recall supporters were feeling frustrated with his actions on how he has dealt with the pandemic in California.

Orrin Heatlie, the lead proponent of the recall, said the governor has “mismanaged the state by making bad decisions” with numerous statewide shutdowns, leaving millions of people unemployed.

“He’s opening up one day and then closing the next,” Heatlie said. “People in California are truly suffering as a result from these decisions and he’s making these decisions without any consideration for the people of the state.”

The governor’s mishandling of the pandemic is not the only reason why recall supporters are pushing for his replacement. Other reasons include Newsom signing laws such as California Assembly Bill 5, which affects the employment of independent contractors as well as California having some of the highest tax rates in the country.

This is not the first time California has experienced a recall effort. In 2003, former Democratic Gov. Gray Davis was recalled from his second term in office, later was replaced by Republican Gov. Arnold Schwarzenegger. Large endorsements from former Republican leaders Newt Gingrich and Mike Huckabee along with maintaining constant media attention have led this current movement to be one of the most successful since then.

Not all who are weighing recalling Newsom come from a conservative background. Following Jan. 25, when Newsom began the process of reopening businesses, others have now started to show disapproval for the governor because of this.

Jocelyn Meza, a 27-year-old entrepreneur, shared her feelings of doubt for Newsom with how he is dealing with the pandemic.

“It doesn’t feel like he really has a solid plan for the vaccination roll outs. I understand he was trying to open back up for the sake of the businesses that have been closed, but it felt a little rushed and unorganized with how he re-opened the state,” Meza said.

California’s vaccination distribution plan has been in effect since mid-December, with the first phase administering vaccines to healthcare workers and long-term care residents. As more doses of the vaccine arrived, the state has moved on to its current phase of distribution, which allows individuals who are 65 and older to receive the vaccination. As of February 25, around 8.2 million vaccines have been administered. According to Meza, the part of the reopening plan that she views as lacking is the speed of administration of the vaccine for other age groups who have weak immune systems.

Martin Carcieri, a political science professor at SF State, said that Newsom is stuck in an unwinnable predicament.

“As a citizen who tries to be fair and see all sides of these issues, Newsom is in an impossible situation. It’s brutally difficult to make these decisions and hope he’s making the right one,” Carcieri said.

According to a January survey from the Public Policy Institute of California, Newsom’s current voter approval rating is at 52%, dropping from the record high 64% rating he received in May 2020.

Counties have until April 29 to verify signatures. If the recall campaign is successful, a recall election would take place sometime between October and early November.