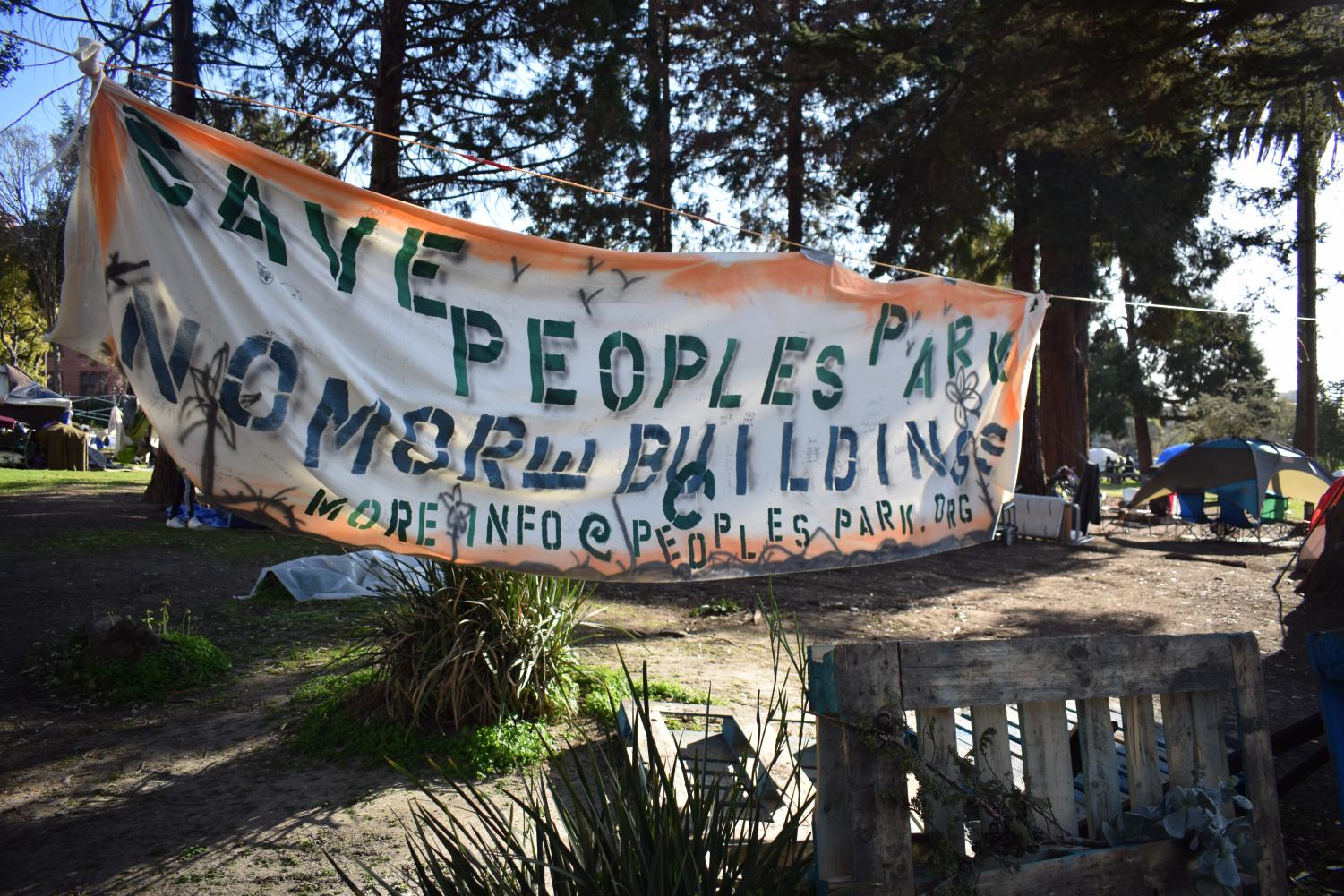 Occupiers posted tents on top of the NorthEast corner after the University cleared a corner of People’s Park for soil sampling on February 8. More information of the organizing can be found at linktr.ee/peoplespark. (Lucky Whitburn-Thomas / Golden Gate Xpress)

Organizers for Defend People’s Park, a group made up of students, East Bay residents and park-goers, are entering their fourth week of occupation in protest of the Berkeley Capital Strategies People’s Park Housing Project.

People’s Park has long since been a place for freedom and expression among Berkeley residents. In 1969, a similar protest occurred after the university attempted to build dormitories on the land. On May 15th, 1969, known as Bloody Thursday, the university fenced off the new park, leading to a rally and march to reclaim the park, which was met with police violence. One man died, another was blinded, and dozens were sent to the hospital, but the fencing eventually came down.

The occupation has been going on for four weeks, but the housing project, which will include 950-1200 beds for students and 75-125 apartments for supportive housing, has been in development since Fall 2018.

The university hopes this will be a step toward helping the housing crisis it is currently facing. An estimated 40% of students are unable to live in Berkeley, and the city has seen a 14% increase in the homeless population from 2017-2019.

We knew that this was the moment we had to protect the park and so we all jumped on it.”

According to Alecia Harger,  a sophomore at UC Berkeley and Defend People’s Park organizer, the occupation was sparked when the university displaced residents by putting up fences in the park in order to collect soil sampling, which is in its final stages.

“We knew that this was the moment we had to protect the park and so we all jumped on it,” Harger said about this last chance organizers had to physically interrupt the development process, which is expected to begin in 2022.

During its occupation, Defend People’s Park has been distributing tents, sleeping bags, clothes and raising money for supplies.

“We are transitioning a little bit more toward mutual aid work,” said June Nelson, recent Berkeley graduate and organizer for Defend People’s Park. “But the goal is to have a daily presence at the park, and provide support for the people here however they need.”

Participants of Defend People’s Park have been putting on events and activities to keep the community engaged and educated, including gentrification teach-ins, Sunday gardening, art-in-the-park and community meetings every Friday night.

One of the organization’s demands, listed on its Instagram page, @peoplesparkberkeley, is abolishing and defunding university police. Nelson said there is a constant police presence at the park, and that the campus uses fear mongering in the form of official statements and constant police alerts to make students feel unsafe about going there.

“The university definitely pushes the crime narrative that the park is just full of violence,” Nelson said.

In her letter to Berkeley students, Chancellor Christ added that if the park is left as is, it will continue to be a “locus of extensive criminal activity” affecting those who frequent the park.

From 2013 to 2018, over 10,000 UCPD-related events were documented in People’s Park, the majority of which were for assault or battery, narcotics contacts and noise.

The bathrooms are in atrocious condition. If you look at the bathrooms in San Quentin, Santa Rita or any local prison or gym, you see similar conditions.”

According to an FAQ response from Berkeley News in 2018, the campus’s annual costs for maintaining, staffing and policing the park were approximately $360,000, with $169,000 of that money going toward staffing, security patrol officer coverage, refuse and plumbing and $200,000 related to police costs.

Many organizers and students, like Harger, who frequent the park are not seeing the effects of that money.

“The bathrooms are in atrocious condition,” Harger said. “If you look at the bathrooms in San Quentin, Santa Rita or any local prison or gym, you see similar conditions.”

She added there is almost never any soap, toilet paper or paper towels and no ability for anyone to fully wash themselves in them, a problem for park users and residents.

According to Kyle Gibson, communications director for UC Berkeley Capital Strategies the notion of a resident population at People’s Park is not accurate.

Gibson added that, although the university is currently making an exception because of the coronavirus pandemic which caused shelters to reduce their capacity, historically it has enforced the rule that nobody can stay in the park overnight.

“There has not been overnight camping permitted in the park for the last 50 years,” Gibson said. “And once the shelter in place and health conditions improve, the university will again reinforce the existing rules that have always been in place.”

“If you are a Berkeley resident, if you’ve been on the south side of campus, you know that people have been sleeping in that park,” Harger said.

Regardless, even if the university did not intend to follow through with the new development, according to the chancellor’s letter, the university does not have the resources or expertise to provide both safe and sanitary living conditions permanently at the park.

Defend People’s Park’s goal remains to construct supportive housing and onsite services, which the university sees as a better alternative than providing them with an outdoor space. “We’re talking 125 units of supportive housing being developed,” Gibson said. “The city of Berkeley itself only has slightly over 300 units of supportive housing right now. So what the university is doing is going to be an enormous gain to the community for what is one of the most direly needed types of housing for our unhoused population.” It will also include services like job placement and financial planning and health assistance.

The university is working with Resources for Community Development, a Berkeley-based nonprofit, to develop and operate supportive housing units.

According to Alicia Klein, an associate director at RCD, they have a range of different rent levels within one building, so that they can help people in different income situations.

Additionally, different developments have different focuses for their residents. For buildings focusing on people coming out of homelessness, like the People’s Park development, they need to get referrals from the city of Berkeley and Alameda County, which uses a coordinated entry system for serving people experiencing homelessness.

“They also need to prioritize folks who have the most intense needs, so folks who have been homeless for a long time, or repeatedly homeless- the technical term is chronic homeless-would be prioritized,” Klein said. “They would kind of be at the top of the list to get a referral.”

My biggest fear is that one day in the morning I’ll wake up and they’ll say ‘You got to go,’ without any preparation. Without any say so. I live on edge waiting for that to happen.”

Other factors that determine prioritization in the coordinated entry system include housing barriers, age, household size and health vulnerability. This means residents of the park might not be eligible for this housing. According to Defend People’s Park’s response to the chancellor, with the park potentially no longer a viable option, this displacement could increase the violence and harassment current residents face.

One resident, Norman Lewis, is not prepared to have to move at a moment’s notice. “My biggest fear is that one day in the morning I’ll wake up and they’ll say ‘You got to go,’ without any preparation. Without any say so. I live on edge waiting for that to happen.”

As for Defend People’s Park, they plan to continue their presence in the park indefinitely.

UC Berkeley will seek environmental and project approval at the Sept. 2021 Regents meeting; if they get it, they will continue plans to develop student and supportive housing units on the People’s Park site.

The Board of Regents, comprising 26 voting members, is the governing board of the UC system. They meet six times a year to discuss finance and capital strategies, among other things.