Rios helped lead the Gators to their best win percentage since 2006, until COVID-19 cut the season short 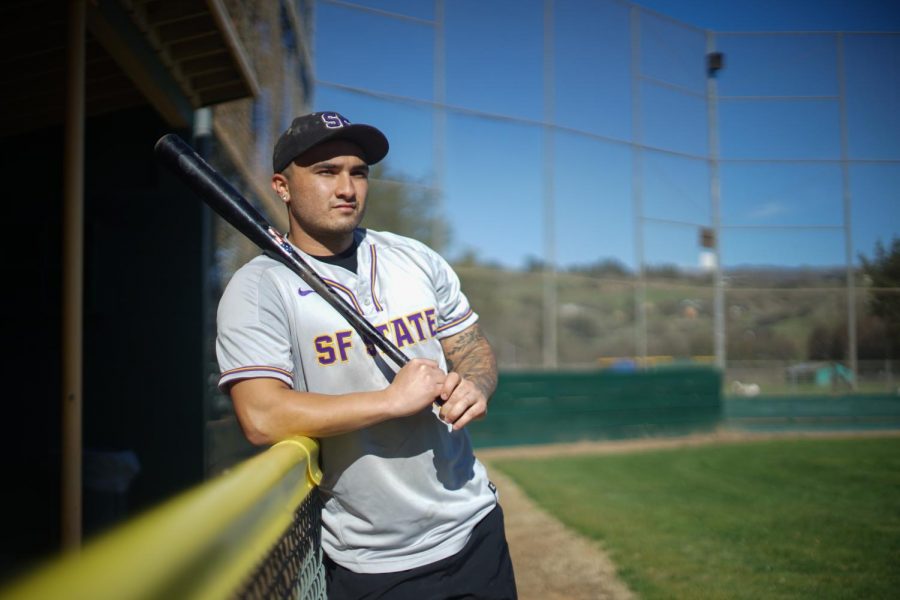 Richie Rios, a 23-year-old student athlete from Gilroy, leans on the team fence at a baseball field at Morgan hill on Feb 21. Rios made the 2020 All Stars honorable mention from the California Collegiate Athletic Association. (Ricardo Olivares / Golden Gate Xpress)

One of the first memories of Richie Rios for many of his teammates, including Kyler Crone, was a memory that left a lasting impression: two home runs during one of his first scrimmages with the team.

Since that day, Rios has shown he can not only be a great baseball player, but also a great leader for his Gators teammates. From his offensive improvement to his adjustment to a new defensive position, Rios impresses those who are around him on the field.

Crone, the Gators’ second baseman, considers Rios to be a great teammate with a quiet confidence about him.

“He’s probably one of the better teammates I’ve ever had,” Crone said. “He’s a guy you can turn to just in any situation, he helps a team get through things. In tough situations, he’s cool, calm and collected. So he’s a good leader and a role model for the other guys.”

Rios, a 23-year-old student at SF State from Gilroy, was an honorable mention for the California Collegiate Athletic Association All-Star team last season, which was his first playing for the Gators after transferring from Mission College in 2019.

“I feel pretty fortunate,” said Tony Schifano, head baseball coach for SF State. “We got the program to a position where we could recruit a player of Richie’s caliber and Richie’s ability on the field. He’s very mature for his age. You look at him and you feel like he’s older than he actually is.”

The Gators had a 14-8 record when the 2020 season ended, which was the highest win percentage for the team since 2006, when it began keeping digital records. In 2020, they only played 22 of the 50 games scheduled for the season before COVID-19 brought things to a halt.

At the season’s end, the Gators were on their way to play at CSU Dominguez Hills on March 13, 2020, but had to turn the bus around after hearing about the game cancellation.

Rios said adjusting to a new routine that includes Zoom workouts has been difficult. He said it is especially tough on the freshman who aren’t able to build chemistry with their teammates.

“The accountability for yourself becomes a lot higher since COVID,” Rios said. “Just because there’s no one else who is going to be there to push you. It’s just you. That’s tough but it is what it is, just keep going.”

Rios finished the 2020 season with a batting average of .317 across 22 games, with two home runs and 11 runs batted in, earning him an honorable mention to the CCAA All-Star team as a third baseman. Both of his home runs came in the final seven games of the season.

“I think if we played out a full season, and you extend Richie’s numbers through an entire season — because he was really starting to get hot there — I think his numbers would have spoken for themselves,” Schifano said. “He probably would have been a unanimous All-Conference player at that point.”

For Rios, the All-Star nomination was about the team.

“It felt good, but to me it felt more like a team thing,” Rios said. “Baseball is not a one man sport; you’re fueled by everyone around you. It’s the people that are in practice with you every day who make you be a better player, a better teammate, and are pushing you.”

What impresses coach Schifano the most about Rios is his leadership. Schifano regarded Rios as a quiet young man who is humble and earns the respect of his teammates for leading by example.

“For me, it’s like having another coach on the field,” Schifano said. The excitement that Rios exudes “rubs off” on his teammates, relaxing them and guiding them as a team leader.

Last season, Rios faced the challenge of switching from shortstop, his favorite position, to third base, a position he doesn’t like as much. Due to coaches feeling like the shortstop position was already solidified, he was asked to play shortstop and didn’t complain about the move. Rios hopes he can go back to playing shortstop.

“He was a shortstop his whole life,” Schifano said. “When he got here, we had a shortstop that kind of solidified the position in the fall, and Richie took to third base very easily, didn’t complain, and he worked his tail off and became an all-conference third baseman.”

Rios loves the challenge that baseball presents. He appreciates the ups and downs that come with the sport and relishes finding consistency.

“It’s very hard to be consistent. And when you do see consistent players, I think it makes you appreciative towards them. Just cause, you know it’s not easy. It’s one of the hardest games there is. It keeps you humble.”

Rios is currently a senior with two more years of eligibility. He is majoring in criminal justice and wants to have a career in juvenile probation, but is interested in the idea of pursuing baseball in graduate school.

“I wanna play baseball as long as I can,” Rios said. “It’s a game that keeps you young, and until someone tells me it’s time to hang up my cleats then I want to pursue it as long as possible.”