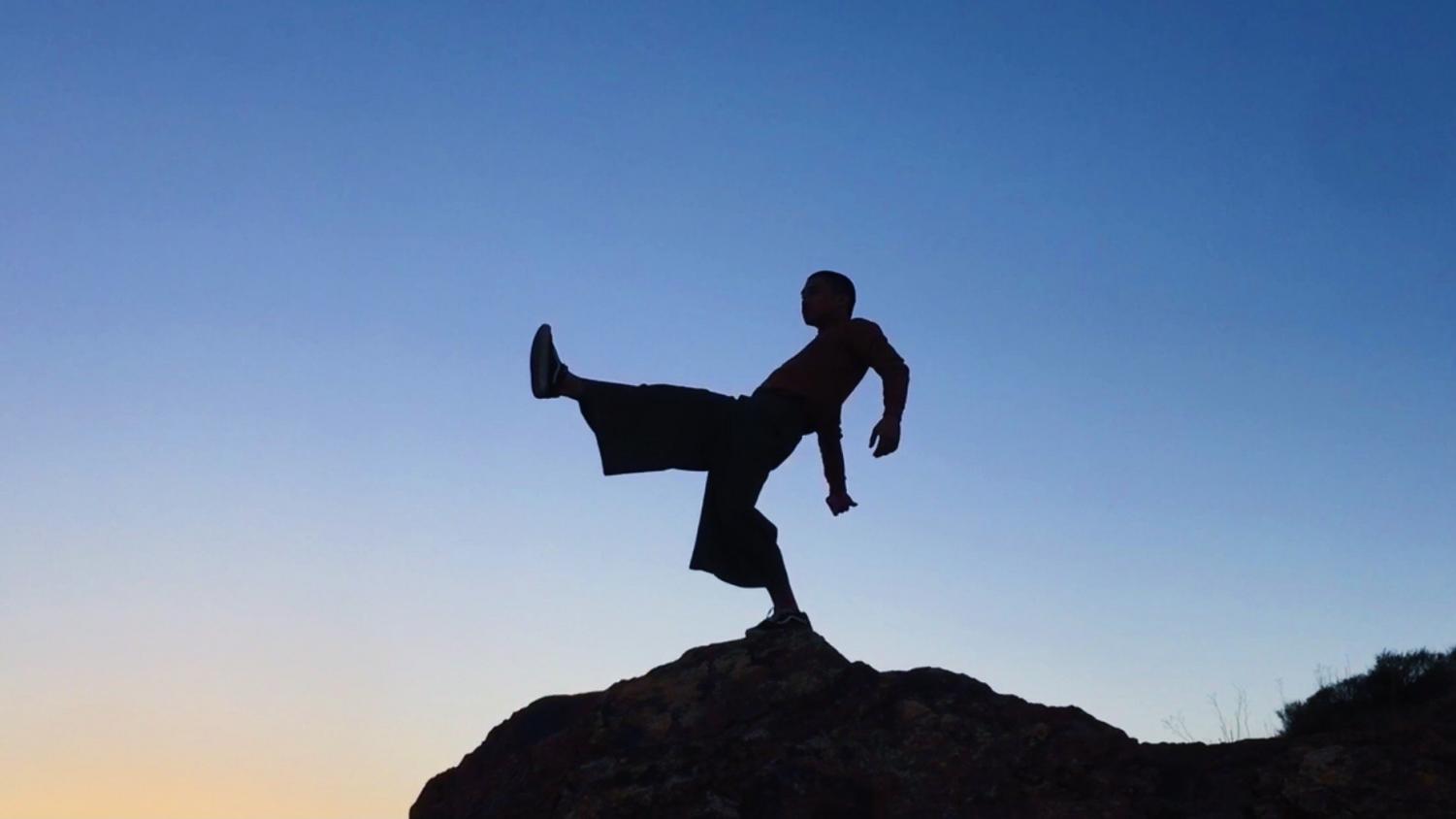 Johan Casal dances for a film assignment. The choreography and location is inspired by the hit series “Avatar the Last Airbender.” (Courtesy of Johan Casal) (Johan Casal)

Johan Casal dances for a film assignment. The choreography and location is inspired by the hit series “Avatar the Last Airbender.” (Courtesy of Johan Casal)

SF State instructor Cecelia Bechelli teaches her tap class alone in an empty dance studio. The room once echoed a jumble of chatter and click-clacks between sequences, but now it rings silent. The only sounds come from her taps hitting the marley floors and the music playing off of her computer.

There’s no work across the floor, group numbers or touching of any sort.

In teaching the study of movement, SF State professors in the School of Theatre and Dance have no choice but to think outside of the virtual box that keeps most of the world sitting still.

“It’s challenging and certainly not as much fun as dancing face to face with my students, but now that I’ve had many months of practice, and made as many improvements and modifications as I can, I’m really enjoying teaching my students,” Bechelli said.

Students and faculty try to search for the silver lining in a mode of teaching that inherently defies all aspects of their craft. Otherwise, there’s only one other option available, which is to not dance at all.

The art of dance is merely learning ways to move through space, according to SF State ballet and modern dance teacher Wendy Diamond.

“Part of classroom etiquette is teaching people to not get in peoples’ way because you don’t want anyone to get hurt,” Diamond said. “We teach them that there’s certain ways you enter the combination, and you need to leave enough space. There are rules about all that.”

Students once defined the space they would leap and glide through — now the space defines them. Some students don’t even have enough room to do a proper port de bras (a structured carriage of the arms).

“Dance is really all about the whole entire appendage from the top of the head, to the bottom of your feet, to how you can extend those arms. Right now we’re losing it on the screen,” Associate Professor Ray Tadio said.

Diamond said she keeps her classes focused on the barre, the handrail where students are stationed to do small movements in repetition. Students use chairs as a common alternative to the wooden barre found in dance studios. Diamond said her rail is made from PVC pipe, thanks to her husband’s handicraft.

“I have to make every movement very small, everything we do is very small,” Diamond said. “We try to find angles that will work for them and ways to turn their body so that certain things can function better.”

For a recent solo assignment, Diamond encouraged her students to view their small spaces as a movie set. Some danced outside, others danced in closet-sized spaces, and one girl even used her family’s refrigerator as a major part of her choreography.

Onara de Silva, a dance student who currently lives in Sri Lanka, attends class 13 hours ahead of her fellow dancers, sometimes dancing in her family home at 4 a.m. Virtual learning has tested her abilities to be creative and ready to learn.

“We’re used to such big studios and so much room and freedom, but it’s also important as dancers to understand how to work in different spaces,” Silva said. “That’s definitely something that I’ve had to struggle with and understand.”

The stern, mean dance teacher trope is nothing new. Dance instructors in TV and movies are often painted as authoritative figures who demand respect and perfection, with little patience for excuses (think: Abby Lee Miller from “Dance Moms”).

Many students recognize that an instructor’s high expectations stem from their ability to see their students’ potential to be something great.

It’s funny, because my partner who’s like, on another side of the house, noticed and said, ‘You’re screaming, you’re screaming!’, and I was like, ‘What?’ because I don’t know how the students on the other side are taking the material. Are they understanding me completely, or are they just still not saying anything?”

Diamond said that in a time of online learning, where bodies are cropped, or pixilated or lagging, there’s not much room to nit-pick. Instructors now grade based on effort and potential, not pristine technicality. She praises her students just for showing up.

“As a teacher, I’m significantly less judgmental of my students because I can’t actually judge them,” Diamond said. “I really am grading now completely differently, grading on things like improvement. I’m doing this sort of holistic approach about keeping them sane.”

According to Diamond, dance teachers traditionally have a stronger emotional connection with their students than most professors from the long hours spent in practice before performance and the physical closeness they share with their students. Diamond said she’s turned into a cheerleader, all day everyday.

“I try to stay as upbeat as I can because I know how hard it is for them,” Diamond said. “I try to see what they’re doing wrong, but I can’t always see their whole bodies. I try to make corrections on the alignment of their pelvis and spine and then also correct their footwork […] I mean it’s crazy hard.”

Johan Casal, SF State dance student, said he’s learned to become more disciplined with correcting his own technique because he understands his professors’ limits. He’s become more self-aware with his own body, given that his instructors can’t physically correct his posture or the articulation of his feet.

“As I’m doing ballet in my room, I’m like, ‘man, I hope I’m doing this right,’” Casal said. “I’m overcompensating by just having a super, super back straight and stuff, just reminding [myself] all the things that I would have gotten called out for in person in class.”

Before the switch to remote learning, Tadio largely depended on his students’ body language and the physical energy they brought to the studio to determine if he needed to speed up or slow down instruction. For the first few classes online, he found himself exhausted from shouting in an attempt to gauge the exchange of energy between him and his students.

“It’s funny, because my partner who’s like, on another side of the house, noticed and said, ‘You’re screaming, you’re screaming!’, and I was like, ‘What?’ because I don’t know how the students on the other side are taking the material,” Tadio said. “Are they understanding me completely, or are they just still not saying anything?”

The fact that his students show up every time, on time, with cameras on, is enough for Tadio to give it his all.

“I could have just given up, just say, ‘no, I’m not doing it, it’s too hard,’” Tadio said. “But like, as long as they show up, it’s my responsibility to give them the best of me, and I’m not going to compromise the energy and the knowledge that I can give them.”

Converting passion and emotion from a three-dimensional art form into a two-dimensional recorded performance is tough for many performers. Some of the quieter dancers, however, revel in the privacy of their own room, with their webcam as their only audience member.

Diamond reflected on one particular student of hers who mostly kept to herself in the studio. When things turned virtual, she blossomed. She did the most beautiful choreography and used the camera in a way Diamond hadn’t seen before.

“There are not very many like her, but it allowed her to open up without fear of performance or fear of judgment from other people because she’s a quiet person,” Diamond said. “That worked for her really well. She’s like, one of the very few.”

Mira Shui Lian Rose, self-proclaimed quiet dancer, said it’s significantly more difficult to see how others in the class dance. The anxiety to perform well in front of the class and keep up appearances has diminished for her.

“I feel like it’s kind of easier for me to dance when I’m not right in front of people, which is like the opposite for a lot of people,” Rose said. “But I like that aspect of it, because it kind of creates a third wall between the teacher and the rest of the class.”

Tadio likes to host happy hour Zoom calls, where his students are invited to better connect with one another. It’s also a space to candidly reminisce about late-night rehearsals and daydream about their hopes for the future.

“I tell them I can’t wait till we have face to face again, to actually meet you and see how you transpose this material that I’m giving to you, this knowledge that I’m sharing with you,” Tadio said. “They’re just gonna bust out, and hopefully they won’t hurt themselves by putting all that energy out.”

Dancer Marely Rose Carter is thankful that she still has an outlet to express herself and stay moving.

“We’re stuck at the computer all day, just doing classes or watching movies or whatever,” Carter said. “It’s just nice to have like a few hours every day to get up and get moving in like a fun expressive way.”

Bechelli said her tap classes feel a lot more fun when the group is together, but she recognizes that the department is not alone in this new form of virtual dance. Online performances and classes surpass international borders and levels of expertise, even reaching the pros of The Royal Ballet and the Paris Opera Ballet.

“Dance is powerful in that it provides physical exercise, mental stimulation, an outlet for creativity, and a sense of community,” Bechelli said. “I’ve found that my students at SFSU have risen to the challenges of the pandemic and have joined dancers all over the world in experiencing this new way of dancing together.”

They’re just gonna bust out, and hopefully they won’t hurt themselves by putting all that energy out.”

Dance student Casal is looking forward to when he can finally dance alongside his peers, but isn’t writing off this unusual circumstance as a waste.

“It’s gonna be funny when we look back on all of this in hindsight, once we do eventually get back into whatever is the new normal is after this. I wouldn’t be the person that I am today if it wasn’t for this time in our life being stuck in here,” he said. 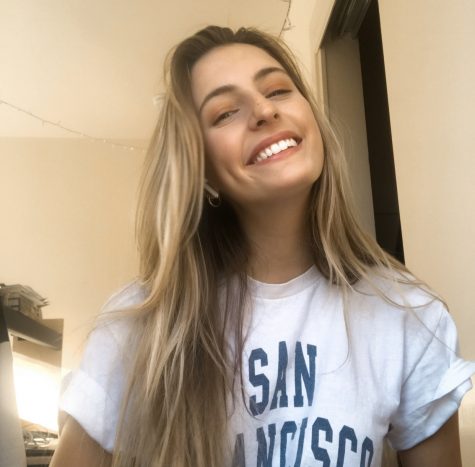