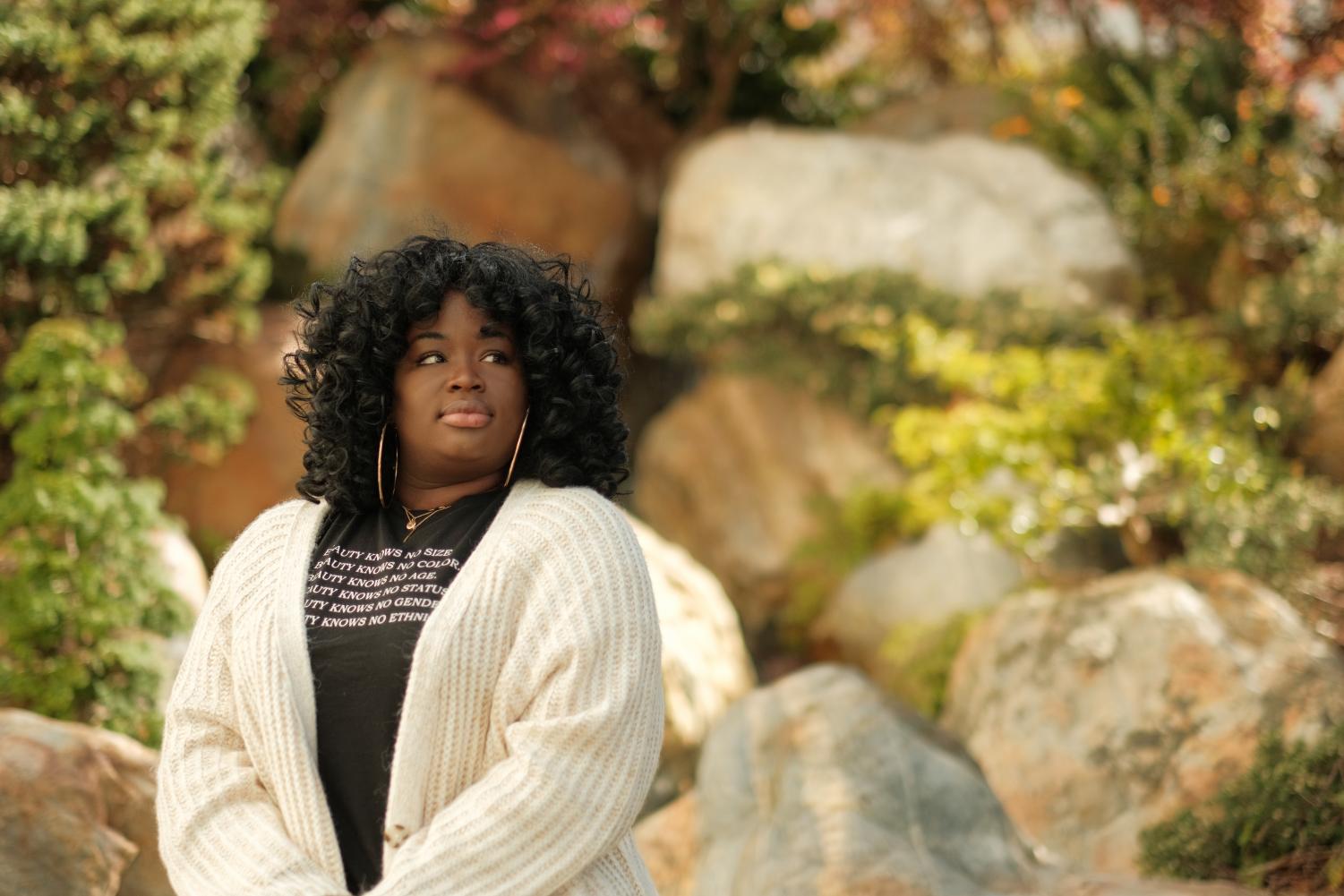 Amarachi Nnodim, SF State nursing student, sits for a portrait at SF State on Feb. 25, 2021. Nnodim has witnessed disparities in the medical field, and like others, hopes to promote equitable care. (Cameron Lee / Golden Gate Xpress)

Black nursing students at SF State are addressing disparities and promoting equitable care by speaking out about the disparities that they notice, in order to combat racial bias in the medical field.

These students are hoping to reimagine the field they are working toward through personal experiences to provide care as effectively as possible to everyone. Methods include bias training and verbally spreading awareness.

Amarachi Nnodim, who is studying to obtain a Master of Science in nursing at SF State, hopes to focus on promoting women’s health and has witnessed the disparity in care for patients of color as compared to white patients.

“Before I started nursing school, I worked in a nursing home,” Nnodim said. “And I could tell a lot of the patients who were women of color wouldn’t get that much priority. The biases are there. When it comes to medication, they wouldn’t give medication on time to certain people.”

In 2018, 6.2% of Black adults received prescription medication for mental health conditions, compared to 15.3% of white patients, according to the U.S. Department of Health and Human Services. This data shows that there is clearly a discrepancy for care that white patients receive compared to Black patients.

The effects of this discrepancy have amplified during the pandemic. In a study on implicit bias published in 2012 by the National Center for Biotechnology Information, nursing homes with more than 40% of residents who were non-white experienced case and death counts that were three times higher than those in nursing homes with low proportions of non-white residents.

Nnodim also wants to be an advocate for pregnant mothers as Black infant mortality and maternal death are concerns of hers. “You don’t really see that many Black women nurses taking care of Black women who are pregnant,” she said.

Diane Udoka, an Entry Level Master of Science in Nursing student at SF State, wants to be a Certified Registered Nurse Anesthetist and is currently working toward her registered nurse license.

I have instances where patients did not want to see any Black doctors because they felt like they were less adequate to diagnose them or prescribe them the correct treatment.”

Udoka wants to help the Black Bay Area community by focusing on raising awareness about preventive care, namely screenings for diseases such as hypertension, diabetes and breast cancer.

Disparities in early screening naturally manifest in higher death rates. In 2017, the mortality rate from breast cancer was 26.9% for Black patients compared to 19.4% for white patients.

While Black patients are subjected to racial bias from medical professionals, Black doctors and nurses also experience it from patients. Sometimes, patients do not want to receive care from doctors or nurses because of the color of their skin.

Danielle Rodgers, an SF State graduate who is now a UCSF administrative assistant, wants to become an epidemiologist and focus on studying diseases within the Black community.

“I have instances where patients did not want to see any Black doctors because they felt like they were less adequate to diagnose them or prescribe them the correct treatment,” Rodgers said.

The relatively low proportion of Black physicians further compounds the other systemic barriers to Black patients. Rodgers said that skincare diseases such as psoriasis and eczema are often overlooked when the patient is Black.

On the flip side, Black patients experience better health outcomes when their physician is also Black. A study by the National Bureau of Economic Research found that “Black doctors would reduce the mortality rate from cardiovascular disease by 16 deaths per 100,000 per year, accounting for 19% of the black-white gap in cardiovascular mortality.”

A lot of people doubted me, telling me, ‘Maybe you need to think about it, maybe you need to look into something else and take your time with it.’ I have to prove to myself that I was capable, that I did understand what I’m talking about.”

Rodgers said that in order to overcome disparities, it’s important to promote more awareness about what African Americans have been through and informing other people about the challenges that have to be overcome. She said the best methods of self-education are through experience: volunteering with nonprofits and getting involved through community work.

“I feel like oftentimes, people did not know that I have a college education, and when they found out about it, they were really surprised, one being a Black female, two being a parent of two kids and on top of that, going to work,” Rodgers said.  “A lot of people doubted me, telling me, ‘Maybe you need to think about it, maybe you need to look into something else and take your time with it.’ I have to prove to myself that I was capable, that I did understand what I’m talking about.”

Udoka said that she faces racism frequently, but can’t let it bother her too much because she believes that, for many, it was part of their upbringing.

“It’s not something you can eradicate,” Udoka said. “But I think what would be a step in the right direction is getting the doctors, the nurses and the medical staff and put them through basic training to combat racial oppression.”

A study conducted by PubMed Central asked participants to take part in implicit bias training, which included an Implicit Association Test and a training video. It found that those who completed the training were more aware of biases and showed more concern for discrimination, over a four to eight week period, than those who did not take the training.

“I hope to be in a position that I’m able to help my people and also have a platform where I can spread education and wealth of knowledge to people in my community,” Udoka said.