Keeping The Depot alive, through the spirit of its manager

Not wanting The Depot’s name to fall in the face of pandemic and virtual-ness, Paloma Abarca has worked tirelessly to keep alive the venue that gave her so much 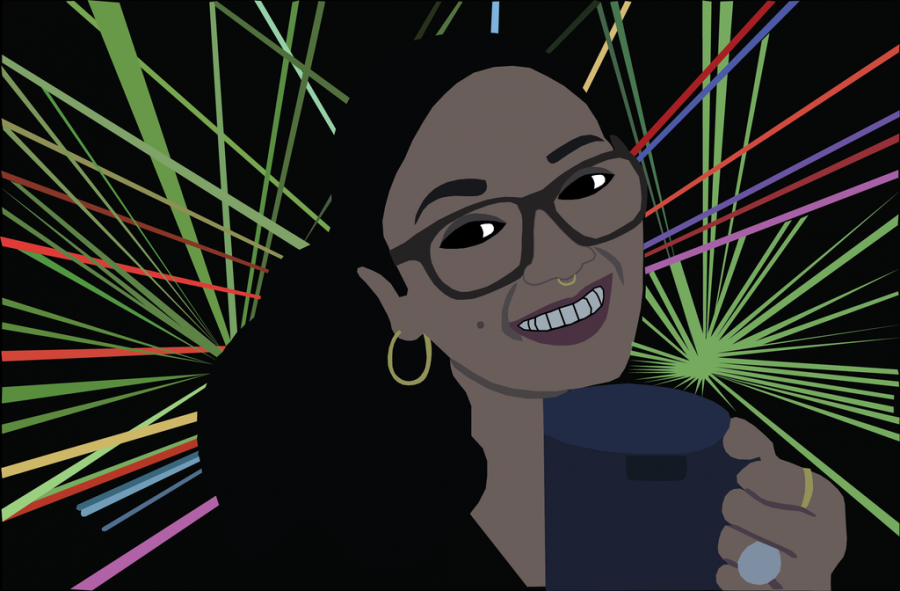 Abarca, who took over as The Depot's head manager in Spring 2020, said her goal is to keep The Depot alive for current and future students. (Lea Loeb / Golden Gate Xpress)

It was a packed karaoke night at The Depot in Fall 2019 – the first karaoke night of the semester. Paloma Abarca had just become the venue’s assistant manager and was still getting used to hosting in front of a live audience.

For those of us who have yet to set foot on campus, The Depot is SF State’s designated live venue space.

The live music is great but the nonstop chatter and laughter amongst students is the venue’s true soundtrack.

Abarca could see the crowd pouring in, filled with of-age students enjoying expensive beer from The Pub; wide-eyed freshmen attempting to find their footing; karaoke veterans of previous years sauntering in confidently.

Some of Abarca’s colleagues from KSFS, SF State’s student radio station, trickled in to show her support. Although they quickly realized they wanted to see her do more than just host. Abarca’s friends pleaded and convinced her to get up there and rap Snoop Dog’s “Ain’t no Fun.’”

Completely impromptu, Abarca got up onto the stage and duetted the Snoop Doggy Dog classic with Je’nae Singh. She remembers it so fondly.

“Moments like that, you just don’t get virtually,” Abarca said.

Abarca was quickly promoted to manager of The Depot by the next semester, Spring 2020 — the semester COVID hit — and has been the manager ever since, riding the highs and lows of virtual entertainment.

All her plans to host live music, stand-up comedy and social events for students have since become physically impossible. The Depot didn’t only exist to host these events, and the students who frequented the venue were looking for more than just a stand-up set. They were there to find their place, their people and their passions on campus.

“We didn’t want The Depot’s name to die down. For students to not know about The Depot,” she said. “We wanted to keep it alive.”

Most of the classic events — game nights, comedy open mics and weekly music performances — that were hosted in person by The Depot are still being held virtually today. Of course, some events were discontinued due to low participation, but Abarca has fought to continue enriching students’ experiences outside of the classroom.

Sometimes, laughter is necessary in the face of pain brought on by the world, academia or life itself. Knowing this, The Depot has held a monthly open mic show specifically for comedians to gather and poke fun at these unfunny situations — providing catharsis for students.

When the show’s host, Andrea David, was struggling to find someone to assist her, Abarca stepped in to co-host. Though Abarca certainly doesn’t consider herself cut from the same cloth as other show participants.

“Me not being a comedian, like I can only do so much, you know,” Abarca laughed, dismissing herself.

“I don’t think she gives herself enough credit,” David said. “You know how they say you are your toughest critic. That’s definitely very Paloma-esque because some of my friends would go to the shows — They’d be like, ‘I love your new co-host!’”

While comedy night had posed its own challenges, it was actually one of the easiest for Abarca to adapt to in the virtual landscape. Other events have been lost, attendance has been shoddy and the manager role itself has changed drastically.

Without an assistant manager or designated interns, the workload solely falls upon Abarca.

“AS students can only work 20 hours a week. And I spend more than 20 hours doing this.” Abarca said.

Associated Students is the student-funded organization that runs The Depot, the student government and other student resources on campus, with students usually being hired to actually run them.

An average day of work for Paloma consists of signing contracts, scouring the internet for new artists to showcase, then figuring out the paperwork to hire them. She also has to advertise on The Depot’s various social media accounts, test all her Zoom links and her favorite part, log on to be the face of The Depot — even if only for a few students. To help improve future events, she then creates surveys to better understand what did and didn’t appeal to the crowd.

All this adds up to a lot of screen time, along with the workload of a full broadcast and electronic communication arts major and her other jobs outside The Depot. Co-workers and advisers of Abarca are surprised by her consistent effort.

Alissa Maggard, Associated Students production manager and SF State student, worked alongside Abarca to host the Rhythms Festival this semester. A week-long event of hosting local musicians and performers as famous as Rico Nasty took a semester’s worth of planning.

“She tells me about her other jobs and I just have to look at her and go ‘Paloma, this workload is insane, what are you doing to yourself?’ ” Maggard said.

For Maggard, working with Abarca is easy and effortless. A scheduled 30-minute meeting to fix a minor technical issue could easily become a productive two-and-a-half-hour spent planning a whole event.

“She’s always had this light-hearted, good nature, in combination with her huge work ethic and dedication to getting the job done and getting it done well.”

The night Rico Nasty performed virtually isn’t comparable to her in-person performances, but Maggard said that she felt palpable energy on Zoom for the first time.

Abarca, of course, hopes to make a career in event planning after school, but her dedication to The Depot stems from something beyond that.

“I would have never seen myself working for like, as you know, because I’ve honestly never really been one to be like, super involved with school,” Abarca said. “It’s cool to like, sit down and just get to know other students.”

She still remembers the first time she even heard about the place.

When she transferred to SF State as a community college graduate, she found herself on a new campus, eager to find her place — and it took some searching.

There were so many clubs she sifted through, sororities she looked through never being able to fully commit to joining because something was just missing, something that she just couldn’t find.

But it found her. One day in Fall 2019 in her radio class, a fellow classmate invited her to his performance at The Depot. At the time she didn’t even know there was an event venue on campus, so naturally, she went.

“The rest was history,” Abarca said with a laugh. “I was like okay; this is where I am going to be hanging out. I would like to eventually manage and help put some stuff together.”

She became assistant manager that same semester and in what felt like no time was promoted to manager of The Depot. When COVID-19 hit, Abarca felt cheated out of the opportunity.

“It definitely did suck, like not being able to do my first year as manager in person. But at the same time, just doing what I have been doing virtually, and seeing, some of these events being successful and seeing students liking these virtual events and attending them also feels great,” Abarca said.

The possibility of hosting or streaming live performances from The Depot next semester looks promising, and Abara plans to keep seeing it through as the manager.