Campus Cat Committee tends to most vulnerable in the community 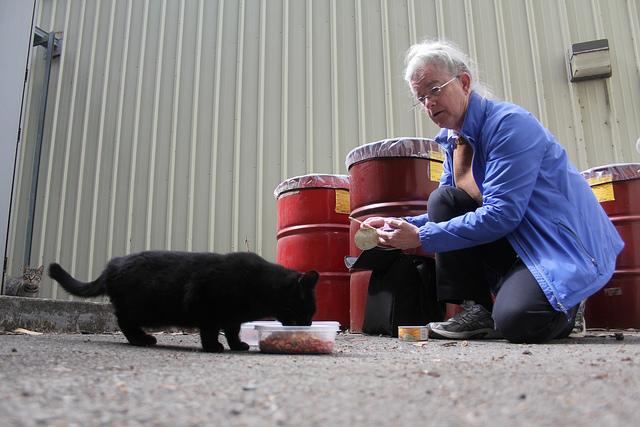 If you take a walk through SF State, it’s likely you will come across thousands of students struggling to get through the day, each with their own obstacles. What you probably won’t see is a smaller population that spends its time just trying to survive. I’m talking, of course, about cats.

Feral cats have been known to wander onto SF State periodically. Unlike your average campus, these cats aren’t worried about whether or not they’ll graduate in four years or if creative writing really is a respectable major. They are merely trying to stay alive; they are hungry, afraid and sometimes hurt. That’s where the Campus Cat Committee comes in.

The Campus Cat Committee is a group of volunteers that devote time to feeding and caring for cats that wander onto campus. Its goal is to keep the wildlife thriving, yet unobtrusive to the rest of the school.

As Brigid Duffy, a member of the committee, said, “Better cats than rats!”

Duffy, the administrative support coordinator for the school’s Department of Academic Technology, first arrived to campus as a graduate student in 1977. She started working on the Campus Cat Committee seven years ago and said she wants no funding from SF State.

“We receive no money from the University, never have, and as long as I have any say about it, we never will,” Duffy said. “We will never, never, ever take money that could be used for student scholarships to pay for cat food.”

Aside from the occasional flea treatment or visit to the vet, most of the committee’s expenses go toward buying cat food each month. The committee leaves the cat food in one of two feeder stations set up discreetly on campus so that any cats can come and go as they please.

“We get donations, food somebody’s house cat doesn’t care for, people who want to do something for campus cats,” Duffy said. “The vet we usually use gives the committee every possible discount.”

The San Francisco Society for the Prevention of Cruelty to Animals neuters and performs any surgeries on injured cats for free. After the surgeries, the committee usually brings the cats back and takes care of them in Duffy’s office for a few days until they are back on their feet – all fours, of course.

SF State freshman Kristen Pease is one of the committee’s newest members.

“I used to take care of 20 feral cats, so I know what they’re like and how to handle them,” Pease said. “My job is to feed the cats and refill their water the first Sunday of every month.”

Pease said that she would recommend the Campus Cat Committee to anyone who is looking to volunteer.

“You’re helping out on campus, you get to see some really cute cats, and you’re helping them have a home,” Pease said.

Some students on campus don’t agree with the way the committee is handling the feral cat population.

“I wouldn’t personally go out to aid cats but everyone finds their nook somewhere and what matters is that it is helping out the community in some way,” said Megan Hughes, a senior Africana studies major.

While some students may not be fans of cats, Meredith Eliassen, a reference specialist for SF State, is happy to talk about the cats she has met while on the committee.

“Being on the cat committee has been better than reading T.S. Eliot’s ‘Old Possum’s Book of Practical Cats’ in bringing to life the natural beauty and character of cats,” Eliassen said.

For instance, a cat named Tummy is described as “the social glue of the group.” Momcat, however, has no patience unless there is food involved. Meanwhile, Splash lurks behind while the other cats eat, waiting his turn. “Definitely worthy of a poem, if I were a poet,” Eliassen said.