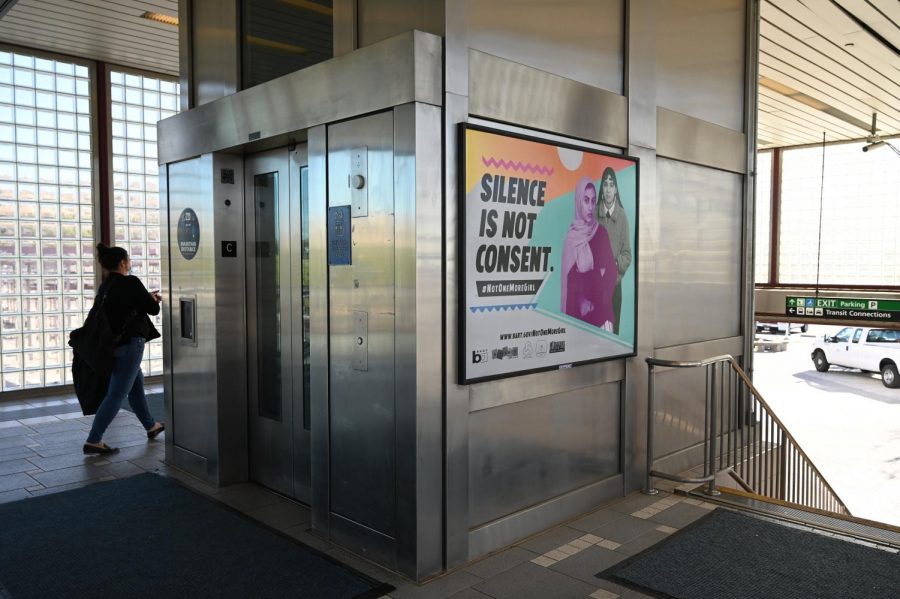 Pittsburg/Bay Point BART station is one of many other locations that display posters of the Not One More Girl campaign as it advertises BART’s first sexual harassment prevention program. (Samantha Laurey / Golden Gate Xpress)

The campaign, Not One More Girl, is a partnership with Alliance for Girls, Betti Ono, Black Girls Brilliance and the Unity Council’s Latinx Mentorship and Achievement Program. The campaign consists of posters and public art located at specific BART stations and a twelve-point advocacy plan, aimed at sexual harassment prevention.

Anyka Barber spearheaded the cultural strategy for the campaign. Barber is the director of Betti Ono, an Oakland-based neighborhood organization that offers arts, culture exhibitions and public programs.

Nisha Sethi, the lead artist in residence at Betti Ono, designed the visual aesthetic and artwork. According to BART, three different campaign posters were created, each with its own message: Silence is Not Consent; Eyes Off. Hands Off. Shut It Down; and Don’t Just Do It.

Three hundred copies of the posters are displayed inside BART train cars, and 50 are posted on select station walls, including Lake Merritt, MacArthur, Oakland Coliseum, Balboa Park and West Oakland.

Rexy Tapia, trans activist, organizer and co-founder of the Bay Area Queer Nightlife Coalition, was a model for one of the posters.

“I think the visibility aspect of having an out trans woman being represented as part of this campaign has already helped people in my community feel safer on riding on public transportation,” Tapia said. “I’m excited to see the true inclusivity of this campaign.”

Aside from the visual aspect, the campaign also includes policy and structural changes.

Before this campaign, BART did not keep track of sexual harassment complaints like it did with sexual assault and battery crime data. A question was added to its Passenger Environment Survey in the latter part of 2020 about riders experiencing gender-based sexual harassment on BART, to which 10% of survey respondents answered “yes.”

The BART Watch app, which is used by riders to report suspicious or criminal activity, now has “unwanted sexual harassment (non-criminal)” as an option for riders to utilize. Previously, the only gender-based violence-related categories were “Sexual assault/lewd behavior” and “Human trafficking.”

According to Alicia Trost, chief communications officer for BART, they’ve added a research section to their website, detailing what to do if riders are experiencing or witnessing sexual harassment and if they want police intervention. BART is also increasing the number of unarmed safety staff, which includes crisis intervention specialists to help with situations where law enforcement is unwanted such as homelessness, mental health and substance use.

Additionally, the BART Board of Directors voted on April 22 to add prohibition of sexual harassment to the rider code of conduct.

“We’re saying even though [sexual harassment] may not be against the law, it will not be tolerated, we do not allow for it and you could be ejected from our system,” Trost said.

According to Haleema Bharoocha, senior advocacy manager at Alliance for Girls, the campaign really began in 2019, when the Alliance for Girls developed the Together We Rise report, a culmination of research into the lived experiences of girls of color in Oakland, San Francisco and San Jose.

The report, published in August 2019, prompted town halls held across the Bay Area to get feedback from the community on what priority issues for them were and to help develop policy recommendations.

The original launch date for the campaign was April 2020, but due to the coronavirus pandemic, it was pushed back a year.

Despite an overwhelmingly positive community response, BART was initially hesitant to be a part of this campaign.

“As an agency, it’s critical work,” Trost said. “And it’s work that we’ve never done before, being a very risk averse government agency.”

Because the nature of the work is so sensitive, she was worried that a mishandling of the content could result in backlash.

Trost said that because of the organizations that were on board for the project, she felt assured that the heavy content would be communicated appropriately and that BART should join in and provide funding for the campaign.

“One of the reasons why we had never taken on the subject of sexual harassment because we wanted to do it right,” Trost said.

The other organizations joined in conjunction with Alliance for Girls, the nation’s largest regional alliance of girl-serving organizations, with approximately 180 members across the Bay Area that serve girls and gender expansive youth.

Even with so much support from leaders and organizers in the community, this violence against girls and gender expansive youth is being inflicted on a daily basis.

She recalled always sitting close to the doors in case she needed to exit quickly and not being able to listen to music so she could stay aware of her surroundings at all times.

Barber explained the persaviness of these experiences and how they have the ability to re-traumative survivors for the rest of their lives.

“I’m not considered a girl at this stage in my life. But I was 16 in 1996, when I experienced an incident of gender based violence on BART,” she said.

“And I realized at the [BART] press conference – as I’m trying to deliver whatever my talking points are – that I was so triggered that it was difficult for me to stand there as a grown adult woman with an 18-year-old son to talk about my experience, even as brief as it was.”

While many have stories of violence on public transit, when it comes to sharing them, Bharoocha was of two minds. While giving voice to their experiences as they feel comfortable can be empowering, it can also be triggering.

“For some of us, it is a breaking of silence, because in our communities we can’t talk about these stories or they’re so stigmatizing. There’s so much shame. And for some of us, it can be putting our trauma on display for consumption from the public.”

Williams explained the group is demanding collective accountability from the BART riding community and every person has a responsibility to the overall safety and shared well being.

“Girls and gender expansive youth should not have to be worried about their safety on public transit,” Williams said.

The total cost of the campaign was $35,000, and that includes designing and printing all the posters and paying for both the artists and the expertise of organization leaders and members.

The money comes from the BART communications budget and the BART operating budget, which is paid for with money from passenger fares.

However, as Barber made clear, this is not an accurate reflection of the time and labor that organizers put in to make this campaign successful.

“Community based organizations and nonprofit organizations, especially black and brown led, are so severely under resourced, underfunded and under capacity,” she said.

“If each of our organizations were to actually tally up every hour, every dime or dollar that went to this two year process, it will be well over $100,000 in time and resources, and that’s just the tip of the iceberg.”

As for the future of the campaign, BART is aiming to continue following recommendations from the Alliance for Girls Together We Rise report.

Their recommendations include gender-based violence and sexual harassment prevention training for all BART police and staff as well as an increase in unarmed safety personnel or transit ambassadors.

“Starting April 30, we will be hiring 10 transit ambassadors, and we will pay three women youth, ages 18 to 24, [with violence prevention backgrounds] to serve on those hiring panels. And that’s something that we want to continue to do not just for this one hiring but moving forward,” Trost said.

The group also wants to urge BART to hire a survivor advocate for their team. That way there can be another trauma-informed person on the scene to provide comfort and work toward de-escalating the situation without a police presence.

They are currently in the process of developing and funding the campaign’s second phase, co-created with the community youth they are aiming to serve.

“One of my personal hopes is that this leads to overall conversations in all of our communities about sexual violence and gender based violence,” Tapia said, adding that this campaign is really the starting point for these conversations to hold bigger spaces.

As Williams put it, “This is only the beginning.”