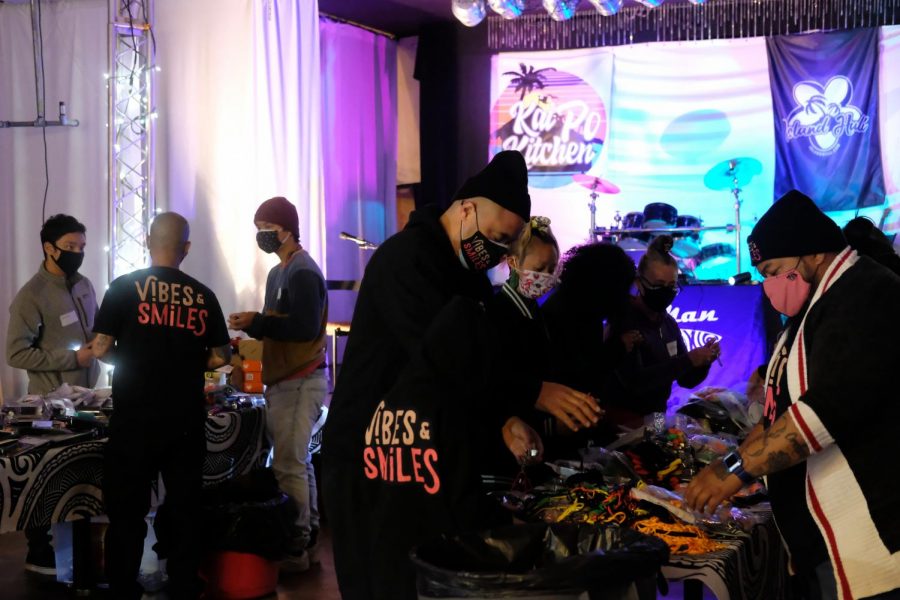 Volunteers from Vibes and Smiles, a non-profit whose mission is to empower and give back to the communities, host a safety kit assembly night for the APPI community in South San Francisco on April 23. (Avery Wilcox / Golden Gate Xpress)

In recent months, violence against Asian elders in the city and around the Bay Area has touched a nerve with community members. Since the pandemic started, Asians and Pacific Islanders have experienced a growing number of incidents involving racism. Whether it be verbal discrimination, such as placing blame on Asians for the virus, or actual physical violence, the different types of incidents have only increased.

Even faculty on campus have faced their share of discrimination during this time.

In a later interview, Jeung also mentioned his own experiences of discrimination.

“Sometimes at the store. Some people purposely moved away from me and my son and I thought that was due to race,” Jeung said.

Another local non-profit organization in San Francisco took a different route to provide help, in the form of safety kits. The non-profit, Vibes and Smiles, constructs these safety kits from donations taken from various drop box locations around the Bay Area. The initiative, titled “Protect Your Elders,” is meant to give older adults the tools needed to defend themselves in case they feel threatened. At each dropbox location, members of the public are encouraged to donate items such as whistles, sirens and flashlights, among other essentials.

Amanda Nwe, founder of Vibes and Smiles, detailed in an interview what prompted her to decide to construct the initiative.

“I really felt everything that was going on because I am of Asian descent also. And I just think about it could be my grandparents, it could be my family member. And so it really hit hard so close to home.”

Initially, the initiative only featured drop box locations in San Francisco and the Peninsula region of the Bay Area. Nwe at the time wasn’t planning to expand the drop box locations past those areas. Being a Daly City native, Nwe wanted to lend aid to both her hometown and its surrounding cities because of the amount of Asians and Pacific Islanders in the community. Daly City, which has a population of 106,638 from recent census data, has a predominantly large Asian community with over 56.2% of the city’s population encompassing them.

“I just felt as if Daly City is like a hidden town that everyone forgets about right next to San Francisco,” Nwe noted.

Requests from businesses and people from other parts of the Bay Area prompted Nwe to expand the location of the drop boxes. Now those in both the East Bay and South Bay region can donate to the cause with respective businesses in the area volunteering to be drop box locations.

The goal is to create and distribute a total of 10,000 safety kits to the entire Bay Area though there isn’t an end goal if demand for the kits remains high. The kits are to be then distributed at various locations such as senior living facilities and food drives or given to other organizations to distribute within their county.

Small businesses, such as Heff’s Barbershop along with prominent names such as boba shop chain Happy Lemon’s Serramonte location, are just some of the places that have volunteered as dropbox locations. For Jeremy Sarmiento, it’s a way to help give back and equip the elderly with the protection they need.

Besides the public donations, Vibes and Smiles has also partnered with other respective members of the community to help raise funds for more safety kits.

The City Eats SF for example has been one of the partners for Vibes and Smiles, assisting in whatever way they can help from spreading word of mouth to partnering during respective community events such as the recent Riders Ending Violence event that happened on April 24.

The non-profit has been assisting neighborhoods in both San Francisco and other parts of the state, delivering meals to the homeless population.

The racist rhetoric and actions against Asians and Pacific Islanders this past year has also shown that community members will work together to fight back against intolerance. CEO and member of The City Eats board of directors, Cat Montes, felt amplified to try and help in whatever way possible.

“The mission is to protect one another. Not only our elders, not only are our street vendors, but for all races and bringing unity to everyone in our community,” Montes said in an interview conducted at a community event on April 11.

On whether there’s a way to help or teach racists the error of their actions, Nina Parks of Gifted Doja and Montes respectively feel that it’s a lost cause to do that. In their eyes, there’s no sense of trying to fix ignorance and that simple discussion isn’t enough to fix the damage racism has caused. What is apparent for both, especially for Parks is that solidarity amongst one another in the community goes a long way to dispel the stigma that there’s division.

“There’s good people of every race, so starting to be able to actually call out what the real issues are, I think will help us as a greater community to be able to define what the problem is, because the more we play into the divisive narratives, the more we create the problem,” Parks said in an interview.

Community members and leaders have stepped up to show that they will not stand for this level of discrimination. Whether it comes from ignorance, immaturity or just racist viewpoints, nothing could justify ostracizing and shunning an ethnic group for Atlas Skateboarding owner Ryen Motzek who noted,

“I believe in being firm and strong and not tolerating hate and ignorance. So I think that I would view combating it by raising awareness and showing support and strength behind the Asian community and showing that we’re a lot more powerful as one than divided.”

Nwe noted that the current plan is to focus on raising enough safety kits for elders in the Bay Area. If demand for the safety kits increases, Nwe said she wouldn’t mind expanding the initiative to service other areas of the country such as Los Angeles or New York.

“If we get a lot more and no one’s picking up safety kits I’m willing to ship it to SoCal to New York or other places, other cities in the United States that have the need for it.”

Readers interested in donating tools or volunteering for safety kit distribution can do so on Vibes and Smiles website here.