With a partial return to campus, some Greek organizations had to make changes to their recruitment methods in order to ensure larger amounts of student interest 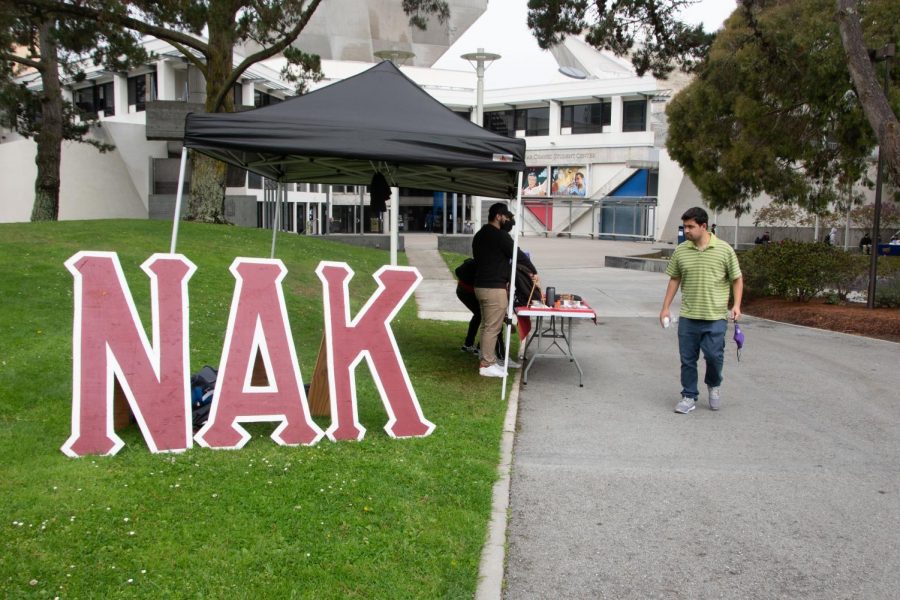 Representatives from SF State’s Nu Alpha Kappa fraternity set up in the Cesar Chavez Student Center to encourage enrollment on Sept. 9, 2021. Greek organizations have had to adjust to keep up with the obstacles of distance learning and a sparse return to campus. (Morgan Ellis/Golden Gate Xpress)

As Emmanuel Aurelio De La Torre, president of the Alpha Beta Chapter of Nu Alpha Kappa, set up for Greek Week’s first day of tabling, he hoped to see a bustling quad come to life with blaring music and an overflow of curious students come up to his table. The reality, however, proved different.

The Latino-based fraternity was met with only some of the livelihood De La Torre had experienced every year since 2017, the year he joined. However, De La Torre knew that there was a strong possibility that his traditional memory of rush week would not be as exciting with an entirely different student landscape.

“We haven’t had the amount of foot traffic that we’ve had other years, and I would say that was to be expected because many students are still worried or not physically back for other reasons,” he said. “But we still had hoped that wouldn’t be the case.”

For the Fall 2021 semester, 23,926 undergraduate students enrolled in classes. Around half of which are in-person according to SF State President Lynn Mahoney. As a result, organizations within Greek Life have been struggling to increase their numbers.

Su Tuli, the president of the Sigma Omega Nu Sorority, blamed COVID-19 and the myriad of circumstances it left students to face, including those already part of these organizations.

“We are a very small organization and the amount of activities that we have right now is a lot lower because a lot of people have gone inactive due to personal hardships like having to move back home indefinitely,” Tuli said.

With a total of five students interested in the sorority, Tuli said she was not entirely satisfied with this year’s rush turnout.

For her it was especially important to bring prospective members in to fill the spots left vacant due to the pandemic and graduation.

On their end, the fraternity Nu Alpha Kappa was seeing around 15 to 25 students interested during “regular years,” De La Torre said. This year, only about 10 to 15 students are interested.

For Sigma Omega Nu the total number of students interested based on the tabling events was five, which Tuli said was also a drop from previous years’ numbers.

Greek Life Advisor Gabi Balleteros said that one of the biggest aspects regarding the impact on student life was student engagement. Part of the problem, she thinks, is the student organizations’ ability to make themselves known to prospects on campus.

After the conclusion of rush week, the turn out in student interest for organizations as a whole was pleasantly surprising, Balleteros said, but as the Greek life advisor, she had to make new efforts as well.

Balleteros made changes to the student resource fair. It took place the first two weeks of the fall semesters rather than spring, as an extended opportunity for organizations to table.

“The Greek organizations specifically planned Greek Week a lot earlier. They did it in the second week of school, when normally that’s done in the spring semester, and they did that so students on campus can see that they’re actively recruiting,” Balleteros added.

De La Torre said he was ultimately pleased with the number of students interested considering the population on campus.

“We had the average number of interests signing up this year compared to other years but there were differences in other areas,” De La Torre said, adding that this spoke to the fraternities value in quality over quantity and interest in those who show interest in return.

Nu Alpha Kappa was the only fraternity that extended rush week for a total of three weeks for the first time, investing in a canopy for their table to allow tabling through adverse weather conditions, offering candy to those interested, playing a diverse selection of music, and using a large sign with the letters “NAK” on it.

Similar to Nu Alpha Kappa, the sorority tried new methods of interaction and physical presentation for their image during rush week.

“This all got people to come to the table whether they were interested or not and it got our name out there.. I think having more of a visual presence came in handy for rush numbers,” De La Torre said.

Balleteros said social media was the strongest tool of all. Both fraternities and sororities utilized it in order to expand their following and exposure even going into the return.

Sigma Omega Nu took to Instagram, one of their main platforms, to create connections with freshman pages or those new to SF State, Tuli said.

Tuli herself was tribute to the benefit social media usage had on the sorority having gone through her own rush process online while the campus was closing during the 2020 semester. She became president during the return to campus, a role that came with lots of incertitude being the first leadership role she had taken on.

Likewise, De La Torre did admit that the fraternity’s Instagram platform was a major contributor to the livelihood of the organization during the pandemic which paved the way for a smoother transition to rush week and coupled strength with the additional efforts employed there.

“Our Instagram helped to designate a meeting place almost where anyone interested could simply go on their phones and look us up to know about our events,” De La Torre said. “It definitely challenged us to create more attention getting material, but it also made it easier to spread the information.”

Although both Tuli and De La Torre noticed Instagram helped ease the transition to campus, social media presence, however helpful, was not enough.

Moreover Sigma Omega Nu made an innovative change to the way they had interests’ sign up. Tuli said the sorority handed out QR codes to prospective members which, when scanned, would lead them to their Instagram and bring attention to their page.

Having potential members visit the sorority’s Instagram page was another medium through which they could gauge attention with the most up to date information about the sorority and each individual member, said the newly appointed president.

With the added burden of having to fill seats left inactive, Tuli was still hopeful and she assured that what the organization lacked in size it made up for in strength.

“Our sorority stands for culture, sisterhood, and academics especially during this time. We are really trying to plan events whether those be in person or online to avoid having anyone feeling lonely but most important to us is our value in connection with one another,” Tuli said.