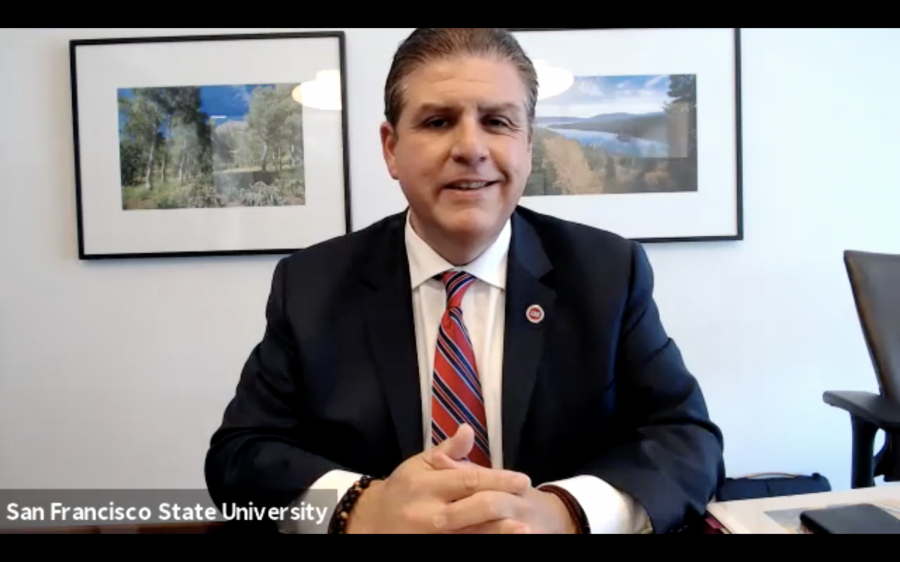 California State University Chancellor Joseph I. Castro visits SF State’s Downtown Campus for a scheduled press conference through Zoom on Sept. 29, 2021. Castro had originally planned to have the meeting on-campus in the J. Paul Leonard library but moved locations due to the campus shutdown after threats were made. (Samantha Laurey / Golden Gate Xpress)

Castro was questioned on an array of topics covering housing, reducing the equity gap, the pandemic and proposed salary increases for CSU presidents

California State University Chancellor Joseph I. Castro’s scheduled visit to SF State was largely anticipated by unions representing various members of the campus community to focus on contracts and fair pay. But after an individual made comments Monday night on Instagram threatening a shooting on campus, the school’s suspension of classes on Tuesday became the centerpiece for Castro’s visit.

Castro was set to hold an open campus forum Tuesday morning in the library with Zoom accessibility, but university police’s uncertainty on the credibility of the threat caused SF State President Lynn Mahoney to suspend all in-person activities, forcing the event to become online only. Castro signed into the forum from SF State’s downtown campus.

Similarly, the press conference held on Tuesday afternoon focused primarily on the investigation UPD had been conducting all day, which by that time, was concluding with a suspect already detained.

“I know it’s been a challenging day for many, and I just want to express my appreciation for the way that things have been handled by the administration,” Castro said at the top of the campus forum. “And I know that we’re all working to ensure that everybody is safe.”

Ahead of Castro’s visit, SF State chapters for both the California Faculty Association and UAW Local 4123 — unions representing faculty and student workers, respectively — sent out emails to their members, urging them to press Castro on various issues of pay.

According to UAW Local 4123 Head Steward Noah Weisel, members of the union submitted questions regarding student worker pay and contract negotiations. Academic Senate President Teddy Albiniak, who moderated the forum, said that only 16 of over 40 questions were chosen.

Both the CFA and Local 4123 are negotiating with the CSU for new, two-year contracts. Both sets of contracts expire on Thursday, and agreements have yet to be met.

In an email from Weisel to union members, he described the CSU’s bargaining offer as, “kind of insulting.”

Both the CFA and Local 4123 also pressed Castro on pay bumps happening at the administrative levels. At the Sept. 15 CSU Board of Trustees meeting, the board voted to implement salary assessments for 10 campus presidents within the university system.

These assessments are concurrent with last year’s individual triennial reviews for these 10, and would be up to 10% increases of their current salaries, with guaranteed equity adjustments for the next two years. The process would then continue to happen following each triennial review, until the median market rate is met.

Per CSU policy, the board can only decide on salaries of the presidents under the recommendation of the chancellor. Castro, who now makes $625,000 annually, took a 30% pay raise over former Chancellor Timothy P. White’s salary, after the board announced his succession of White in September 2020.

The 10 presidents currently up for salary increases — three more will be up for raises by the end of the year —  are under this consideration less than a year after Gov. Gavin Newsom restored the CSU’s budget, which saved SF State from its $41 million budget deficit that resulted in 68 staff members being laid off.

As of late August, 21 of those staff members have been rehired.

SF State President Lynn Mahoney is not one of the 10 presidents being considered for a raise. She will undergo her first triennial review next summer.