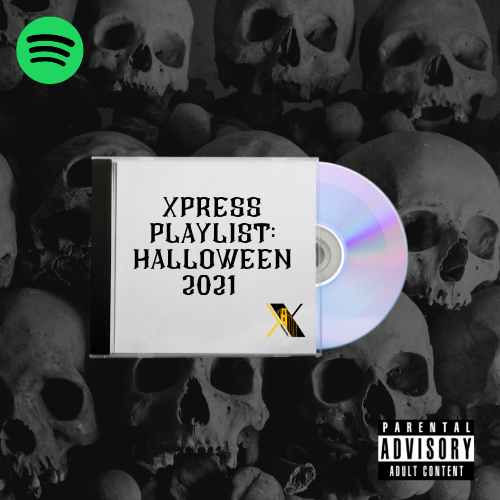 This playlist features 13 of my favorite spooky, Halloween-esque songs. Most songs remind me of horror films: the ambiance, the pacing and of course, the story-telling. Some are just good Halloween party songs that easily fit the theme.

“Melted” is the English title for the Korean song, released by brother-sister duo, AKMU. However, the Korean name is “Ice,” which sounds a lot like “adult” in Korean. This play on words implies that as one gets older, they become more cold-hearted. I chose this song for its haunting instrumentals and the idea of losing hope; that comes to play in horror movies.

Bessie Smith was an American Blues singer from the Jazz Age. I like to think this could be a great soundtrack to an early horror movie with choppy, black and white film and a man dressed like the devil such as Georges Méliès’ “The Infernal Cauldron” from 1903 or even Robert Wiene’s “The Cabinet of Dr. Caligari” from 1920.

“Into The Unknown” – The Blasting Company

What’s scarier than the unknown? That’s often the crux of many horror films. This song is also from one of my favorite cartoons that I watch every October: “Over The Garden Wall.” The mini series is about two step-brothers lost in the woods trying to find their way home.

On the subject of the unknown, we also have it’s accomplice: paranoia. The echoes, gongs, Daveed Digg’s smooth, but escalating rapping, reminds me of movies that feature slashers, stalkers and any time the protagonist checks over their shoulder.

Eighties artists’ had some great spooky music, even if it wasn’t intentional. “Maneater” is something to dance to at a Halloween party, but it also reminds me of a literal, cannibalistic woman chasing someone down the street.

I have to admit that for someone who loves Halloween: I can be a scaredy cat. This song is for the folks that can’t handle jump scares, or in this case for DPR IAN, who really doesn’t want to face the fear of being alone.

This song is perfect chase music. Picture this: an eighties horror-comedy where the protagonist is running away from the killer down a suburban city on Halloween night. This song comes on. You’re welcome.

“The Killing Moon” – Echo & The Bunnymen

How could I not add “The Killing Moon”? First of all, it was part of the “Donnie Darko” soundtrack and I love psychological thrillers. Second, it’s great party music. And it’s about a person giving themselves to a guy who will kill them. It sounds romantic until you really listen to the lyrics.

One of the most underrated Disney animated movies, “Princess and the Frog” features a song that definitely gives me spooky vibes. With Keith David’s low, menacing tone, the song is Doctor Facilier’s, the antagonist, main song in which he is in cahoots with the dead and tricks the male protagonist to make a treacherous deal.

In Latin American folklore, La Llorona is “The Weeping Woman:” a ghost roaming waterfronts and mourning her children whom she drowned. This is just one of the many versions of this song, but I enjoy this one in particular for the intensity and emotional singing.

The instrumentals remind me of a small town in the Old West, blanketed with dust and cacti. Orville Peck’s voice is smooth and poignant in this song. It’s a love song that makes you think of a moon overcasting the shadows of people passing by. This song is less scary, and more so melancholic. It makes me think of the more melancholic, quiet moments. The calm before the storm of what could happen next to our protagonist.

“Orgel” is a borrowed word from Dutch. In Korean, it means “music box.” The ambiance of the song definitely reminds me of the elongating notes and keys that can be heard in older music boxes. As the voices continue to create more layers, the lyrics literally say “spinning” and “dizzying.” This song is quite playful and reminds me of when children, a symbol of innocence, are quintessential in horror films such as “Sixth Sense” or “The Shining.”

It’s catchy, nonsensical and about a murderer. It’s a perfect fit for any spooky playlist, especially one for a party.

I hope you consider adding these songs to your next Halloween mix. I hope you have a wonderful and spook-tacular Halloween!