Members of the Africana Studies Department, the Black Student Union and the faculty union work to hold SF State administration to its word on its 2020 BLM response 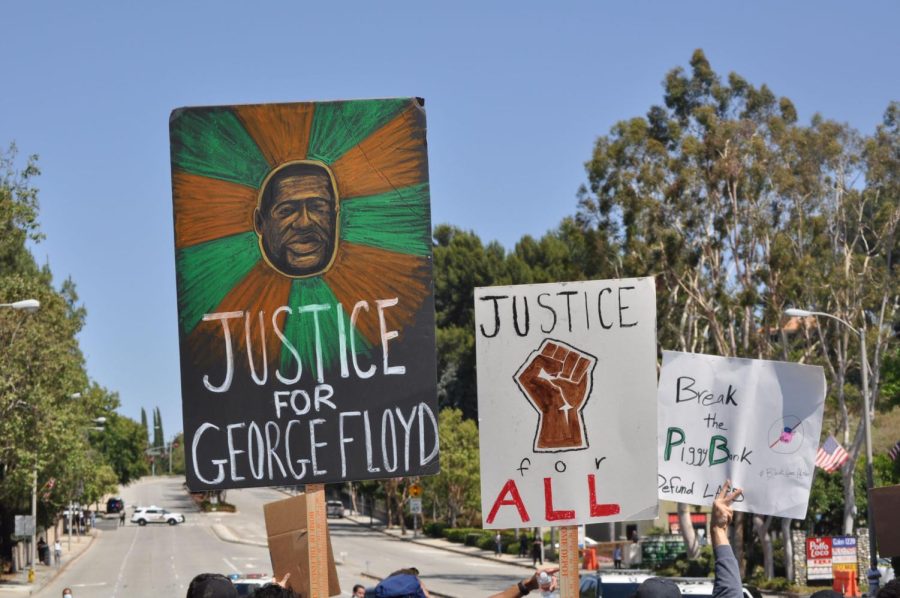 Protesters march down Diamond Bar Boulevard to show their support for Black Lives Matter on June 4, 2020 in Diamond Bar, Calif. A year after similar protests occurred nationwide, SF State students say that the administration's promises to Black students have yet to be fully met. (Chris Ramirez / Golden Gate Xpress)

In late May of 2020, Dae Philpot, along with other Black Lives Matter protesters, refused to let the San Francisco curfew silence their outrage.

They protested by city hall, demanding racial justice and accountability for police brutality in the wake of the murder of George Floyd. By the end of that day, San Francisco police had arrested them.

SFPD detained Philpot for three hours, until 1 a.m., with Philpot mentioning that police fingerprinted them, made them sign paperwork and gave them citations. The next morning, they posted a thread on their Facebook and Instagram story, expressing their frustration for the way SFPD arrested them.

Philpot, the Black Community Programs Officer for the Black Student Union at SF State, said they later felt taken advantage of as a Black protester, when a Biden campaign group during the protest co-opted the event to promote Biden’s campaign, and then left. The Biden campaign’s move, Philpot said, fueled the protesters’ anger and frustration at the time.

That feeling Philpot has is shared not only by students in the BSU, but among some Black faculty on campus too. A year after SF State President Lynn Mahoney and the administration released plans to support Black Lives Matter on campus, some say she and the administration should be more clear and concise in achieving the goals of better supporting Black students and faculty.

“I want the administration to see the work that we’re doing and be inspired by us and to take action and students seriously,” Philpot said.

In July of 2020, the administration promised that the campus would commit to several actions to support Black students and faculty, such as reallocating University Police Department funding to support campus programs that support BLM and anti-racist initiatives, as well as partnering with K-12 schools to retain, recruit, and graduate Black students.

Ja’Corey Bowens, president of the BSU, mentioned that they have been involved in conversations with Mahoney about the promises the administration has made.

Bowens said the priority is to allow Black students to feel they have a community on campus, and a part of that is increasing racial and social justice on campus.

Bowens acknowledges that while the administration has hired Black lecture faculty, it’s not enough to solve long standing issues they see in the system.

“It’s not just the fact that we need Black people, but there’s this automatic racism at play that needs to be deconstructed,” Bowens said. “And no hiring of Black professionals will solve that issue.”

According to SF State Faculty Affairs data provided by Faculty Affairs and Professional Development Vice President Carleen Mandolfo, there have been a total of 14 new Black faculty hires from 2015 to 2022, the majority of which filled positions in management and in Africana studies.

Of the 14, five Black lecture faculty have been hired since Summer 2020. Mandolfo highlighted the challenges of recruiting and retaining faculty of color and in general.

“Faculty of color say many of the same things that white faculty who resigned say,” Mandolfo said. “It’s very hard to live here, it’s very expensive and they’ve most frequently left for other positions and other parts of the country that are economically more viable.”

Current chair of the SF State Department of Africana Studies Abul Pitre supports the administration’s plan to hire more Black faculty on campus. Pitre has been credited by College of Ethnic Studies Dean Amy Sueyoshi for increasing the graduation rate for Africana Studies students who started in Fall of 2014 by 50%, according to institutional research.

Pitre mentioned that the department as a collective decides if faculty are hired, and that he facilities the process.

“As you bring more Black faculty on campus, you begin to have students now get exposed to the wide range of Black knowledge and expertise in the diverse areas that cut across the campus,” Pitre said.

Dean Sueyoshi highlighted the challenges in hiring new faculty, largely in part to the pandemic.

“The challenges that we faced really were last year around COVID-19 — the university basically froze faculty hiring except for the most dire departments,” Sueyoshi said.

Other members of the BSU agree with Bowens and have brought forth these concerns to the administration and UPD.

Both have discussed ways they can try to curb the effects of policing on Black students. Lockhart has expressed disappointment that they had to compromise on their proposal to abolish UPD and agree on defunding and reforming to try to make any changes within the department.

“I think it’s important to recognize that because the police department is part of the Cal State system, it’s not going to change anytime soon,” Lockhart said. “It’s going to take statewide advocacy to get police off campus.”

One of the goals Lockhart and Parson discussed was to implement a citizen-based response group to respond to mental health crises on campus. Parson acknowledged that campus police officers are overburdened with too many tasks.

Parson is concerned with the challenges that come with implementing such a civilian group, mainly due to the industry wide challenge of recruiting and filling positions, as well as developing a model that would work well for this potential group.

“I think we are making efforts to look at response models that include adding civilians to responding to mental health crises,” Parson said. “That’s ultimately what our goal is — we were looking at resources and ways that we can incorporate it here on our campus,” Parson said.

In June of 2020, UPD adopted and began implementing recommendations from former President Obama’s Task Force on 21st Century Policing, which he expects to be fully implemented by June 2022. Parson has a presence on SF State’s Public Safety Advisory Council.

Such recommendations include working with multiple community members and organizations to respond to complex crisis situations that aren’t resolvable through the police alone.

When the Wall Street Journal released its list of the best colleges in the country for 2022, it ranked SF State third in the nation for diversity and campus environment.

The WSJ based its rankings off of 15 factors based on four categories such as student outcomes, academic resources, student engagement, and the learning environment. Part of its data was collected pre-pandemic.

Africana Studies professor and chair of the California Faculty Association Council for Racial and Social Justice, Mark Allan Davis, has issues with this ranking.

To Davis and some within the CFA, the ranking only represented student diversity, and not the diminishing Black tenure- and tenure-track faculty and BIPOC.

One of the main issues some within the CFA have with the administration is that they work on their own terms. SF State’s CFA President James Martel said that the administration has always had difficulty dealing with local racial justice initiatives, dating back to the Third World Liberation Front Strikes of 1968.

“Issues of racial justice were kind of forced on the university both system-wide and specifically on this campus, and the university has never been comfortable with that,” Martel said. “The College of Ethnic Studies, which is the product of the strike in the ’60s, is really one of the greatest things about SF State and it’s always been treated like an unwanted second-class citizen.”

Similarly to Martel, former chair of the Africana Studies Department, Professor Dorothy Tsuruta, said the administration would rather use Black Lives Matter as a tool to make the college look good, rather than actually make an effort to support Black students and faculty on campus.

The BSU also shared its concerns about Black students’ voices not being heard in the conversation.

Bowens is disappointed that the BSU hasn’t been involved with the BLM advisory group, which assesses the university’s BLM initiative.

“I do think that these committees and all these various objectives were created as a way to bypass the Black Student Union when coming up with things that could be helpful for Black students on campus,” Bowens said.

Lockhart echoed Bowens’ thoughts that the BSU feels underrepresented, as the BSU was not asked to send members to sit on the advisory group.

The most recent Black Lives Matter report was updated in Spring 2021 and provided updates on their initiatives including the inaugural Faculty of Color Retention Program and goals of expanding with an intent to make fellowships for underrepresented students of color in STEM fields.