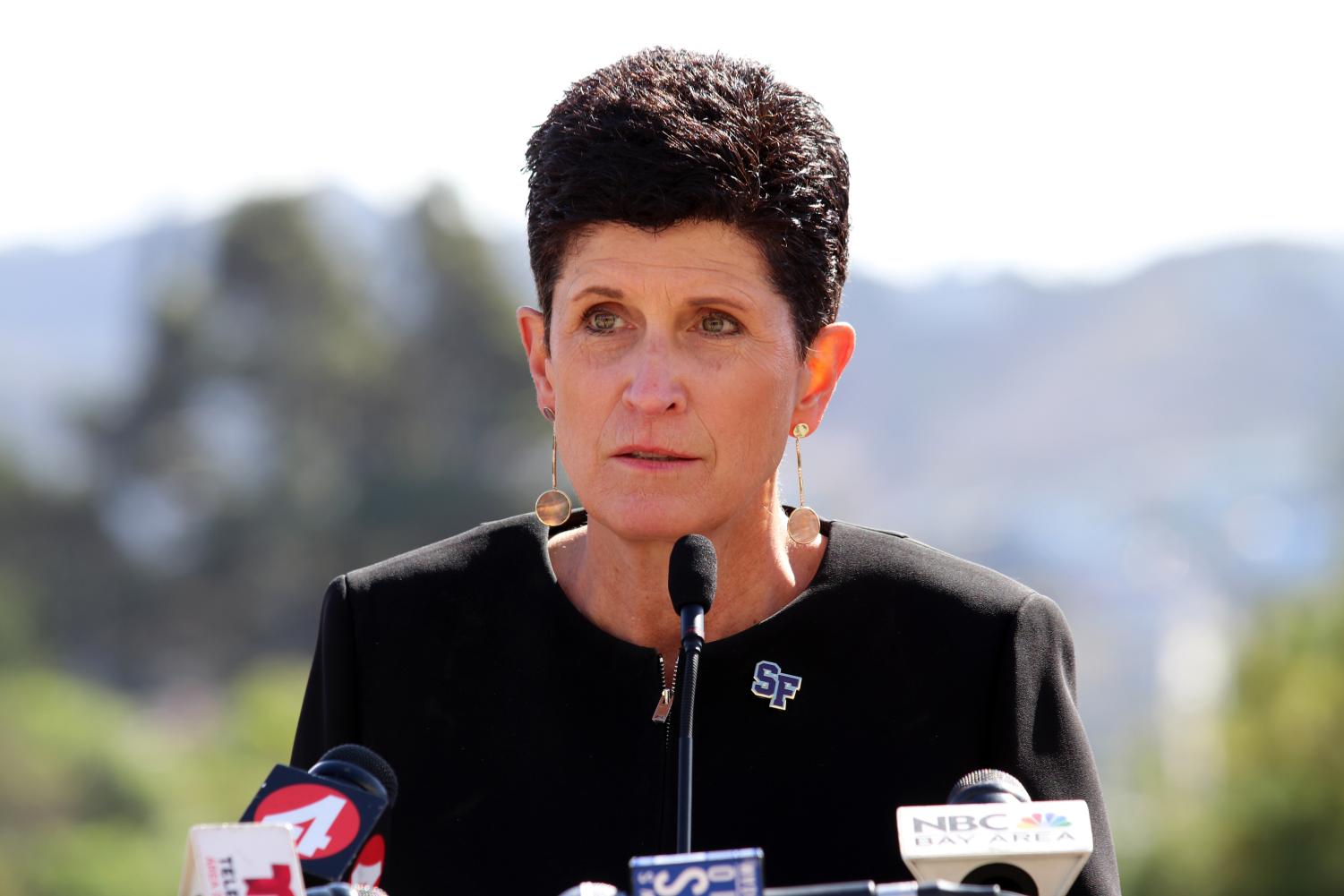 SF State President Lynn Mahoney speaks about the university’s partnership with the city to provide scholarships to teenagers who received vaccination on Oct. 18, 2021. Mahoney said that she came up with the idea, which she said was well-received by the mayor and Board of Supervisors (Sabita Shrestha / Golden Gate Xpress) (Sabita Shrestha)

SF State President Lynn Mahoney speaks about the university’s partnership with the city to provide scholarships to teenagers who received vaccination on Oct. 18, 2021. Mahoney said that she came up with the idea, which she said was well-received by the mayor and Board of Supervisors (Sabita Shrestha / Golden Gate Xpress)

When Zoe Freeman, a 14-year-old freshman at Lincoln High School, found out that she was picked for SF State’s Vaccine Scholarship Program, she said her emotions took her from shock, to dance and then, eventually, to joy.

“My jaw dropped, and then I just started dancing and then I shared the joy with my family,” she said.

The scholarship, which awarded her and 9 other students at random on Nov. 23 with four years of free tuition, was a measure sponsored through the university, the San Francisco Department of Public Health and San Francisco Unified School District, in an effort to encourage vaccinations among children ages 12-17.

“She told me [that she had applied], and I was thinking good thoughts,” she said. “It actually happened and I was just really, really excited.”

Tori, who works with at-risk youth for a Bayview based nonprofit, said that she first became aware of the scholarship through a friend. After hearing about it, she said that she spread word of the program at her work in the hopes that all of the students would apply.

“It’s just an amazing opportunity, so I was hoping lots of people would take advantage of it,” Tori said.

Because her family is asthmatic and that her mother has health issues, Tori said that it was important to her that her daughter was vaccinated, so much so that she received her first dose on the first day her age group was allowed.

In an emailed statement from SFDPH, Deputy Director of Health Dr. Naveena Bobba said that the scholarship program was one of the city’s strategies to provide low-barrier access to vaccinations in San Francisco communities.

“We’re proud that our 12 to 17-year-old youth have reached such high vaccination rates, and incentive programs like these can help give an extra push to unvaccinated individuals to take immediate action to get vaccinated, protecting themselves, their loved ones and our community,” Bobba said.

As of Wednesday, 90% of San Franciscans ages 12-17 had received both doses of the vaccine according to SFDPH data. With 78% of residents fully vaccinated, San Francisco now sits just shy of the 80% of fully-vaccinated residents it needs to lift its mask mandate. But with the new Omicron variant detected in San Francisco, officials said they would continue to monitor the situation before lifting any mandates.

“We will stay alert and vigilant and do what we need to do to protect ourselves. This means getting vaccinated, getting your booster, wearing a mask indoors, and taking the other steps we know help slow the spread,” Dr. Grant Colfax, San Francisco director of Public Health, said in a press release.

According to the scholarship’s guidelines, winners will be paid out the difference between in-state tuition and fees and any  financial aid received. If financial aid fully covers the cost of tuition, the guidelines state that recipients will be paid $2,000 per academic year by the SF State Foundation’s Board of Directors. The two scholarships not claimed were redrawn and new winners were selected as of Monday said Kent Bravo, SF State Media Relations Specialist.

While Tori, a single mother, said she was grateful for the financial pressure that this scholarship was going to alleviate, her daughter said she felt relieved that her college application process was now going to be a lot less stressful.

“I feel like I don’t really have to stress about it anymore, and I love that,” Zoe said.

Although she thought it was still too early to say for sure, Zoe said that she wanted to go into a field of study that has to do with saving the environment.

“I just want to be of significance [in] saving the Earth in some way,” she said.