The delay, which is now being resolved, raises concerns from the organization on its ability to speak freely on its matters without financial backlash from student government 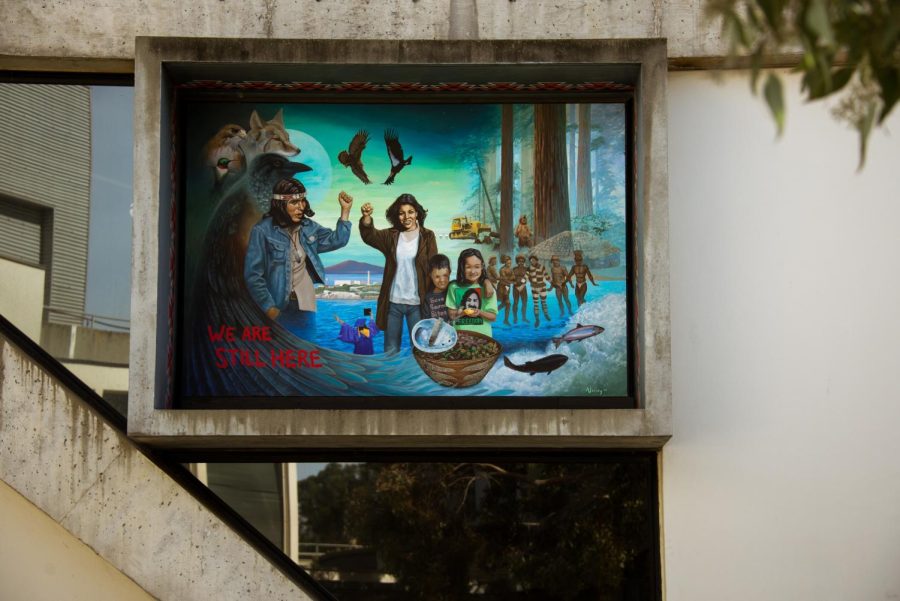 The ‘We Are Still Here’ mural, located in the Cesar Chavez Student Center. The mural, along with the Student Kouncil on Intertribal Nations’ 12th Annual Mural Celebration, were meant to commemorate the lives lost at the California missions and residential schools throughout North America. (Garrett Isley / Golden Gate Xpress)

SF State’s Associated Students stalled funding to the Student Kouncil on Intertribal Nations following disagreement over comments made at an annual event, according to documents obtained by Xpress.

The delay, which is now being resolved, raises concerns from the organization on its ability to speak freely on its matters without financial backlash from student government.

SKINS’ 12th Annual Mural Celebration honored Indigenous people who were killed at the California missions and schools they were forced to assimilate into. The event is typically entirely funded through AS’ Richard Oakes Multicultural Center to pay for dancers, speakers or other featured guests.

SKINS was promised $4,000 from AS to pay its dancers and speakers for the mural event, which was held on Feb. 18. AS management encourages student organizations to receive  payment within 30 days of such events.

“They [the Mexica dancers] closed their shop, Mixcoatl, in the Mission to come and do this for us,” said SKINS Lead Facilitator Elías Mathus. “And so they would be losing money actively for this performance. They did it out of the goodness of their hearts.”

During the event, SKINS member Cash Martinez discussed the mass murder of his Southern Pomo tribe and the state-sanctioned displacement of their people from their native North Ramaytush Ohlone territory, which is now known as Sonoma County.

He premised this discussion by mentioning their personal autonomy from AS due to past allegations that the student government has promoted student organization events as their own, rather than giving primary credit to the groups themselves.

“To the Associated Students of SFSU, I am not here today to be your good Indian,” Martinez said. “This vigil is not your emotional burden, work, labor that they claim to. It is the burden of every Indigenous person who has chosen to be here this afternoon.”

Portillo said that due to COVID-19 constraints, the event’s original date was pushed back. She claimed that SKINS failed to communicate when it wanted to hold the celebration, prompting her response.

“AS isn’t against y’all in any way, shape or form but ok go off I guess lol. The RICHARD OAKES Multicultural Center is named after one of your org’s founders,” she said. “The ROMC stands in solidarity with y’all and literally had every intention to give you a platform & it is literally our job to do so. This is one sided beef.”

According to SF State website’s history of the ROMC, Oakes promoted native people’s right to sovereignty, justice, respect and control over their own destinies.

Portillo deleted the comment shortly after it was posted.

On March 9, SKINS treasurer Jessica Wood emailed Portillo regarding the pending payment. Portillo requested a meeting between SKINS faculty adviser Cristina Azocar and AS leadership before any funding could get dispersed.

“We feel deeply uncomfortable and insulted entering any sort of space where financial support is being held over our head in any capacity, and do not believe that our concerns and issues will be heard, understood or respected by you,” Mathus responded via email.

Portillo wrote back, calling the group out for being vocal about its grievances but not wanting to meet privately to resolve them. She wrote that ROMC personnel were taken aback by SKINS’ response, and that she wanted to resolve the tension.

Azocar met with AS on March 17 without SKINS leadership present and received the payment forms five days after. SKINS is currently in the process of completing them.

AS Assistant Executive Director of Programs Donyell Hill denied that the payments were stalled as a form of retaliation for SKINS student leaders not wanting to meet with the student government. AS leadership also said that delays in the paperwork disbursement are also to blame for the holdup.

“To believe that AS gives students of color or student organizations a platform is the same kind of mentality as being a white savior,” Mathus said.

SKINS supports Martinez’s previous speech and will be releasing a statement regarding their payment delay and relationship with AS.

Editor’s Note: Cash Martinez is the social media editor for the Xpress Magazine. Martinez was interviewed for context but excluded from being included in any iterations of the story for precaution of neutral reporting.

Xpress Magazine’s staff and newsroom function independently from the Golden Gate Xpress, additionally removing Martinez from any editorial say on the story.