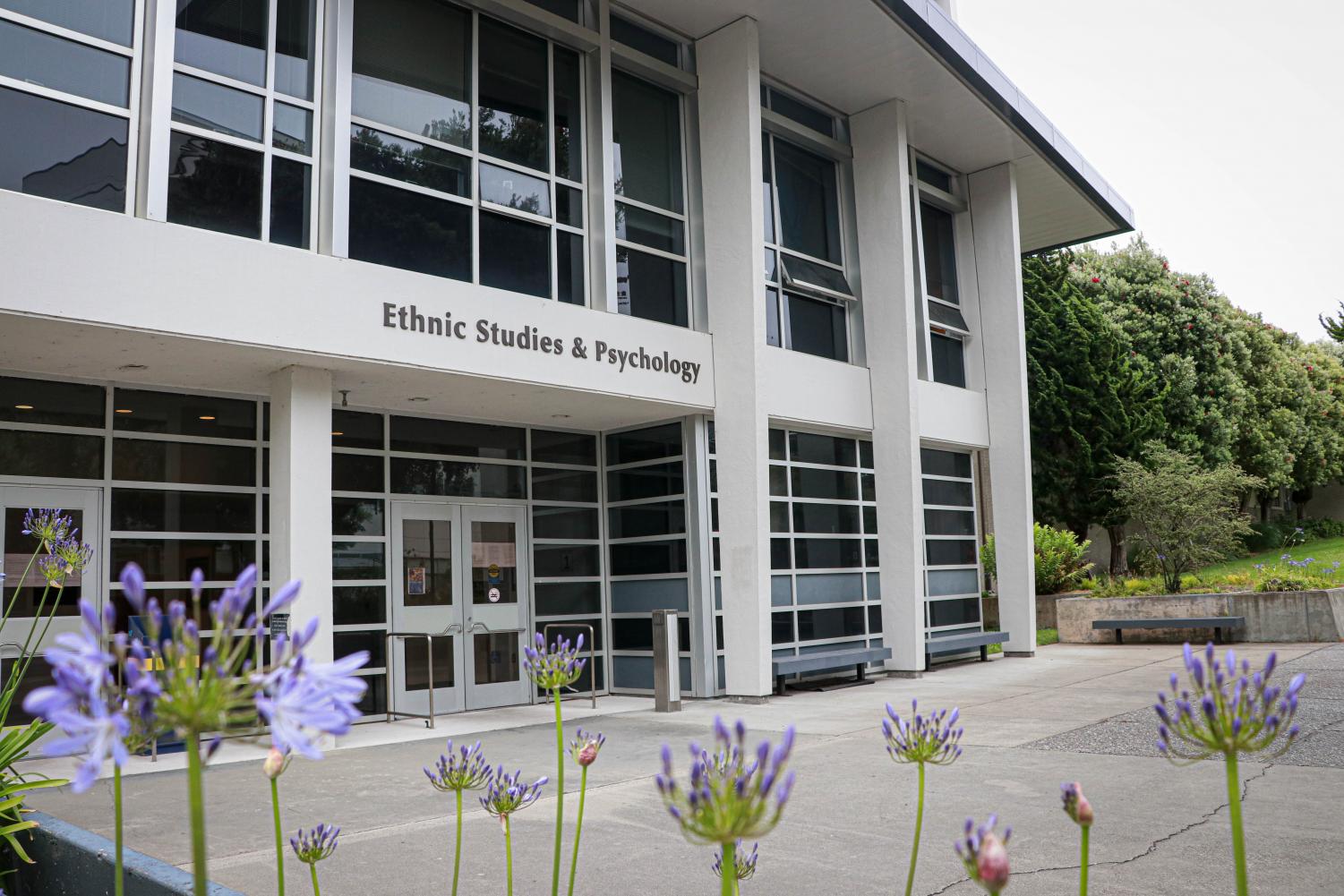 The ethnic studies and psychology building on SF State’s campus, home of the College of Ethnic Studies, which was established in Fall 1969. (Harika Maddala / Golden Gate Xpress)

The ethnic studies and psychology building on SF State’s campus, home of the College of Ethnic Studies, which was established in Fall 1969. (Harika Maddala / Golden Gate Xpress)

California State University (CSU) students will be required to take three units of ethnic studies under Assembly Bill 1460 (AB 1460), which the California legislature passed on June 18. The new legislation, which was proposed February 2019, will take effect at the beginning of the 2021-2022 academic school year.

If signed into law by Gov. Gavin Newsom, AB 1460 will be the first official implementation of an ethnic studies requirement after years of activism, task forces and research reports recommending the CSU to add such a requirement.

The 3-unit requirement is one step in an ongoing struggle for the College of Ethnic Studies that launched on SF State’s campus over 50 years ago. The student-led Black Student Union and Third World Liberation Front went on strike for five months in 1968 to demand courses that reflected their histories, experiences and struggles for liberation.

Africana Studies major Nia Hall was an advocate for AB 1460 while serving as the 2019-2020 College of Ethnic Studies representative for Associated Students Inc. Hall said ethnic studies is essential to her success in the higher-education system.

“The majority of the students enrolled within the CSU system are non white, so we should be given the opportunity to learn about our histories, struggles and successes in this country with its dark past and dark present,” Hall said. “As an interdisciplinary scholarly field, ethnic studies is about self respect and self determination. It’s about racialized groups– workers, students, scholars, organizers and others– refusing to be viewed or gazed upon from a Eurocentric paradigm as inferior or less than.”

Race and Resistance Studies professor Larry Salomon transferred to SF State during his undergrad and joined the ethnic studies masters program. After teaching some classes during his graduate years, Salomon was hired by the college upon graduation in 1994, and he has taught there ever since.

“I think what we’ve done for 50 years in ethnic studies, in a lot of ways, is cultivate generation after generation of activists and organizers,” Salomon said.

Salomon said that in the past few weeks, approximately 100 of his current and former students have reached out to him about how to continue the momentum of recent anti-racist demonstrations following the killings of George Floyd, Breonna Taylor, Tony McDade and other Black individuals by police.

“Many [ethnic studies students] do things in the community that are not just about community service … but that goes beyond that,” Salomon said. “Beyond, ‘Let me offer some services’ to, ‘Let me change the power dynamics because now I understand how those power dynamics exist and I want to organize to demand something different.’”

Ethnic studies is key to confronting racial violence in the future, said Rabab Abdulhadi, director and senior scholar of Arab and Muslim Ethnicities and Diasporas Studies.

“If you look today at what’s going on with the assassination and the killing and the police brutality of Black people,” Abdulhadi said, “people who have actually  learned about that are the first ones to resist racism, to resist white supremacy, to resist police brutality. And so there is a very important value in knowledge.”

The California Faculty Association (CFA), the union representing CSU faculty, endorsed AB 1460 and is now pushing for the governor to sign the bill into law. Africana Studies professor Mark Allan Davis serves on the Council for Racial & Social Justice of the CFA and advocated for AB 1460 over the past year.

Davis says that since the inception of the College of Ethnic Studies, members of the college and CSU community have been trying to implement an ethnic studies requirement.

The CSU Task Force on the Advancement of Ethnic Studies– consisting of top scholars in ethnic studies across the state– released three reports recommending the CSU to adopt an ethnic studies requirement since 2014. The task force’s 2016 report, 2017 report and 2019 report all listed their top recommendations as, “Make ethnic studies a GE requirement throughout the CSU system.”

The university and CSU Academic Senate, a group of faculty representatives from each campus, opposed AB 1460 throughout the bill’s voting process and announced in September 2019 that it would be developing an ethnic studies requirement through the university.

“The CSU opposes AB 1460 as it would set a precedent for legislative interference in higher-education curriculum,” Hazel Kelly, the Chancellor’s Office public affairs manager, wrote in an email. “The CSU Academic Senate has voted twice in opposition to AB 1460. This has brought forth the proposal of the Ethnic Studies and Social Justice General Education (GE) requirement to the Board of Trustees.”

“By this law being passed, it specifically designates ethnic studies as a discipline that needs to be separate and mandatory,” Davis said.

Since 2017, the CSU has hired 71 tenure-track ethnic studies faculty and increased ethnic studies course enrollment by nearly 9%, according to Kelly.

“The next step is the adoption of a general education requirement, which per the public notice process, cannot be voted upon until the July board of trustees meeting,” Kelly said.

The CSU and Academic Senate have not said what will happen if both the state law and the CSU requirement are passed.

Professors from across the state such as Salomon and Abdulhadi say this bill will be a positive addition to the university system, but one that is long overdue.

“Sometimes, more often than not, institutions have to be forced to make changes to benefit the communities they are supposed to serve before they will ever change on their own,” Hall said. “I doubt CSU campuses would have made ethnic studies a requirement had it not been passed. I don’t believe systems like the ones we reside in currently will change and do better on their own.”

Abdulhadi thinks the next step is making ethnic studies more inclusive so that groups like Arab Americans, Central Americans and Pacific Islanders also have representation and resources for their independent disciplines. The bill currently defines ethnic studies as having a “special focus on four historically defined racialized core groups: Native Americans, African Americans, Asian Americans, and Latina and Latino Americans.”

“I think it’s really, really important to link this bill also with the study of Arab-American studies, of Islamophobia, of Palestine and not to allow that to be invisibilized,” Abdulhadi said. “Because ethnic studies has stood historically, especially in the student strike in ‘68, for what I call the indivisibility of justice. The indivisibility of justice cannot exclude and exceptionalize which communities receive justice and which communities don’t.”

Abdulhadi says ethnic studies centers justice as part of its educational purpose, emphasizing students as part of a community and contributors to the common good.

Davis said that for him, ethnic studies is about people of all races fully acknowledging the history of violence that created the U.S. and reconciling the fact that they have a direct connection to it by virtue of their presence in the country.

“I must reconcile how I benefit from America,” Davis said. “Most importantly its history of slavery and the genocide of 50 million people so that white people could have America, or the myth of America. I don’t want to live in a myth, I have to deal with my being here.”

Studies have shown that ethnic studies benefits students of color and white students, and increases academic engagement and graduation rates.

“To know that other people are learning about you is very enriching to people’s energy and dynamic,” Davis said. “I think that’s the most important aspect of anything that has to do with ethnic studies. It makes other people feel present in the world. That they’re not being erased or disappearing.”

Hall said she would like to see a greater offering of ethnic studies majors and minors across all campuses and more adequate funding and professor hiring within ethnic studies programs.

“I don’t feel that the requirement is fully sufficient for exposing students within the CSU system to Black, Indigenious and POC communities, but it is a step in the right direction,” Hall said. “I believe that ethnic studies courses play an important role in building an inclusive multicultural democracy within a society that is not based on those principles … racism within this country is built into its core. Institutional change across the board– within education, healthcare, criminal justice and economics– is needed for change to be made.”

Salomon hopes students new to ethnic studies will be open to taking classes outside their comfort zone and that campuses working to implement the requirement won’t water down their curriculums.

“I’m not trying to convince anybody who still opposes ethnic studies 50 years after ethnic studies was founded,” Salomon said. “If they don’t get it, this isn’t the conversation for them. But they have to get out of the way now because at least now, this is a requirement, and that’s good.”