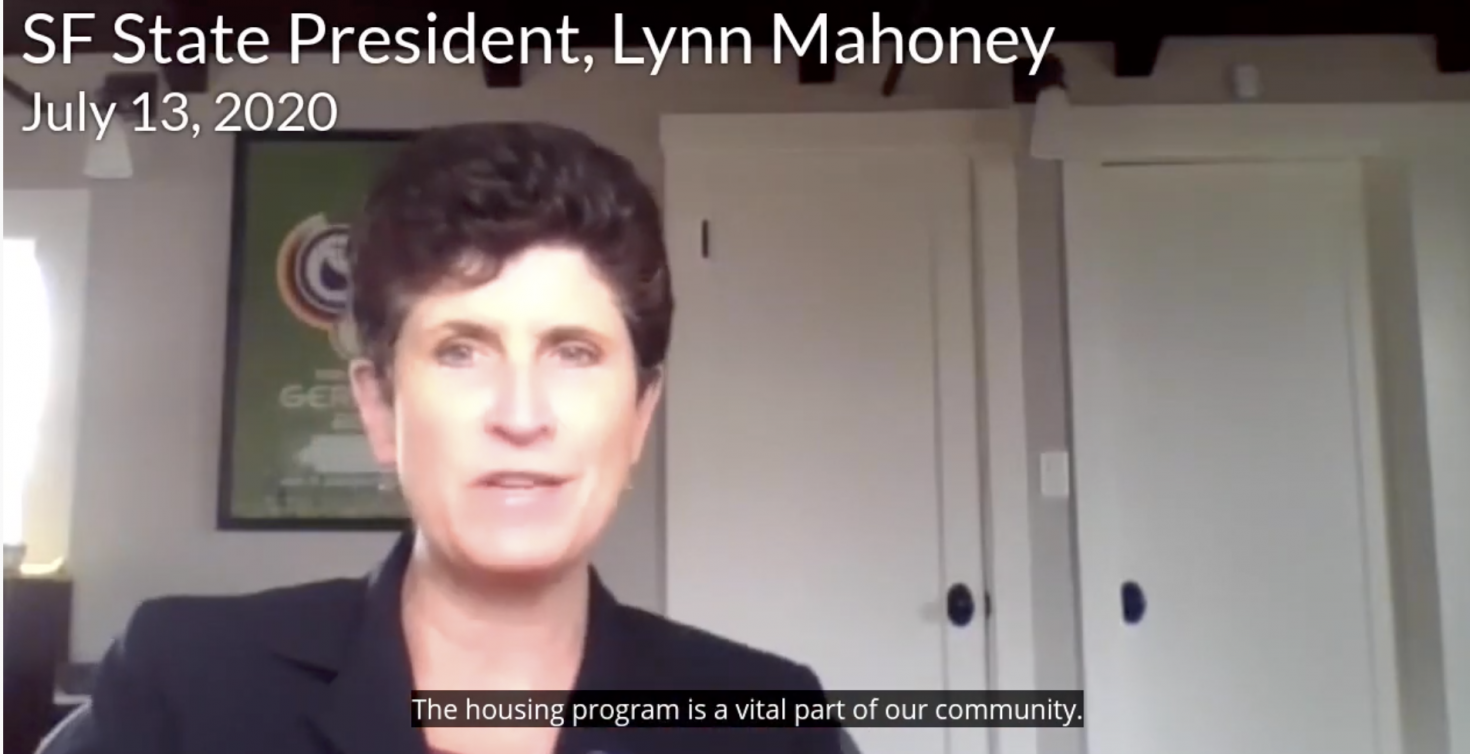 President says the college might be able to avoid layoffs for about a year but “next year will be really rough.”

Faculty layoffs and lecture downsizes are on the horizon according to a faculty wide email sent out by SF State President Lynn Mahoney on behalf of Associate Vice President of Human Resources Ingrid Williams on July 8.

Willliams said the CSU Office of Chancellor’s decision to start conversations about layoffs was, in part, because of the expected $38 million budget cut for the 2020-21 year and “declining enrollment.” The Chancellor’s Office requested a dialogue with union leaders in hopes of “mitigation opportunities,” according to Williams.

The California Faculty Association labor union (CFA) is a union of over 29,000 professors, lecturers, librarians, counselors and coaches in the California State University system (CSU). The SF State CFA Chapter contends that not only is the threat “premature,” but it also potentially violates agreements made by the university in order to accept funding through the Coronavirus Aid, Relief and Economic Security (CARES) Act.

Williams said that the CSU Office of the Chancellor notified unions that each campus will be individually responsible for carrying out layoffs as stipulated in their union bargaining agreements.  There are no current figures on how many could be furloughed, laid off or who is most at risk. According to the bargaining agreement, layoffs are a departmental decision, though what that process looks like is uncharted territory for SF State.

There have not been mass faculty layoffs since the adoption of the current union bargaining agreement, nor have layoffs been a concern since the 2008 financial crisis which similarly hit universities.

The CFA wrote in a recent email to faculty that “early enrollment numbers for fall at most campuses are steady or increased from last year, so there are no enrollment numbers from which we can conclude that there will be fewer classes or less work this fall.”

According to President Mahoney, SF State is anticipating a 7% drop in enrollment, but that it might be closer to 11%, which she predicts will translate into a loss of about $15 million.

According to Mahoney, freshman enrollment has dropped but continuing student enrollment for fall is “looking better,” and she has voiced a sense of responsibility to keep the college from going into “deep debt.”

However, an email by the CFA sent on July 7 said there are issues with the administration’s budget priorities.

“By leaving administrative and other costs off the table, it creates a false position in which there is ‘no choice’ but to cut lecturer faculty jobs or begin layoffs,”

“By leaving administrative and other costs off the table, it creates a false position in which there is ‘no choice’ but to cut lecturer faculty jobs or begin layoffs,” the CFA wrote. “There is a choice and we demand that other priorities give way to what a public university is really about.”
Mahoney said there will be fewer jobs for lecturers “driven by enrollment demand.”

On a list of recommendations authored by the CFA to solve the financial crisis, it suggests a voluntary cut to administrative pay, something that is already taking place at other colleges.

Golden Gate Xpress has previously reported on the shrinking number of professors at SF State, with the simultaneous rise of lecturers and administrators – notably, SF State has had the largest increase in administrators of all CSUs. CFA maintains that this is indicative of administration’s prioritization of the academic “mission.”

“I am not sure what was the intended message,” he said. “It could be a scare tactic by the Chancellor’s Office to lay the grounds for other damaging actions such as forced furloughs, as they did in the previous budget crisis.”

Compared with the 2008 financial crisis

Mahoney began working in the CSU system in 2008 at CSU Long Beach, and COVID-19 has impacted housing in a way the 2008 crisis didn’t, according to her.

The pandemic uniquely impacted the universities’ auxiliary enterprises, which includes student housing and campus vendors among other things.

“All of our vendors, we make money off of all of those relationships,” she said. “That’s all gone away. Our housing program refunded $13 million in a matter of weeks and is looking at very limited revenues for the fall. So they’re not in a position to help us, so that’s one way that maybe that makes this worse.”

Mahoney also said that CSU Long Beach experienced no enrollment decline in 2008 and that the college avoided layoffs by attrition, meaning that if someone left their position, it would not be filled.

The CFA also wrote that furloughs and layoffs would break the conditions that SF State agreed to in receiving CARES Act funding. The CARES Act stipulated that “a local educational agency, state, institution of higher education, or other entity that receives funds under the Education Stabilization Fund, shall to the greatest extent practicable, continue to pay its employees and contractors during the period of any disruptions or closures related to coronavirus.”

CARES act was an economic stimulus bill dispersed in March with the intent of softening the financial impact of COVID-19. Higher education was afforded $30.75 billion through the CARES Act HEERF. SF State was awarded $28,725,948 total. A compulsory minimum of $14,362,974 went to direct student aid and the remainder was to be used for institutional costs directly related to education.

The CFA wrote that $9 million out of $14 million “has instead been funneled into an auxiliary enterprise – housing – that is designed as one of the university’s self-support programs.”
“SF State administrators have directed only about a third of the CARES money to support the academic mission of the university,” the CFA reported.

According to a budget proposal provided to the CFA by Carleen Mandolfo, the Dean of Faculty, congruent to Mahoney’s account of the CARES funding allocation, $9 million went to the student housing program, $3 million went to professional development – including technology training for teachers, $1.9 million went to technology and device accessibility and $500,000 for safety precautions of face-to-face instruction.

If dorms are shut, dining halls are closed and the CARES Act stipulates its use, the CFA argues there is no reason that the funding should be used for things that don’t directly impact learning environments.

Those buildings still need to be maintained and residential workers need to be paid, Mahoney said. She also said that student housing is necessary for enrollment and education. Students who are determined “at risk,” international students, and a smaller and particular group of students will still live in student housing this fall.

Mahoney said that letting housing and residential life fall to the wayside would be seriously consequential to enrollment and the college. Students rely more heavily on campus housing at SF State than at sister colleges due to cost and fragility of the Bay Area housing market.

“We’ve had declining enrollments for a handful of years, largely driven, we’ve been told … by the cost of housing in the Bay Area,” Mahoney said. “We’ve had some declining enrollments. So we we’re expecting some decline, but where we really took a hit with a number of freshmen who said they don’t want to come here in the fall because we’re going remote, or because of COVID. … We have a gap. We’re going to do some long term planning to help stabilize those enrollments.”

According to Martel, layoffs would not only be a financial disaster for teachers who stand to lose their income and health insurance during a global pandemic, but also a disaster for learning. Fewer sections could mean larger classes.

A student by the Reddit handle of ChiefCharms23 posted to r/SFSU about online school etiquette and asked fellow students to “please” not be “rude.”

“Just had a class today over Zoom where at least 5 out of the 30 kids on our voice call couldn’t be bothered to mute themselves despite clearly disrupting the class with their breathing/phone sounds/talking over the instructor,” the user wrote.

Another Reddit user, commandercrapper, commented “someone in my class took a bong rip just barely off camera.”

“Online classes: when they get big, they get really bad,” he said. “And we want to hold on to students … If you have a giant horrible session with like, 200 students and a beleaguered professor, those students are not going to come back.”

fewer students that we need to educate,” Mahoney said. “We have among the lowest class size in the entire CSU system. We have one of the highest tenure track densities … So the good news here is we’re entering … a recession of some sort, we’re entering it from a position of strength. We’ve got a good number of tenure-track faculty, we’ve increased over the last few years.” 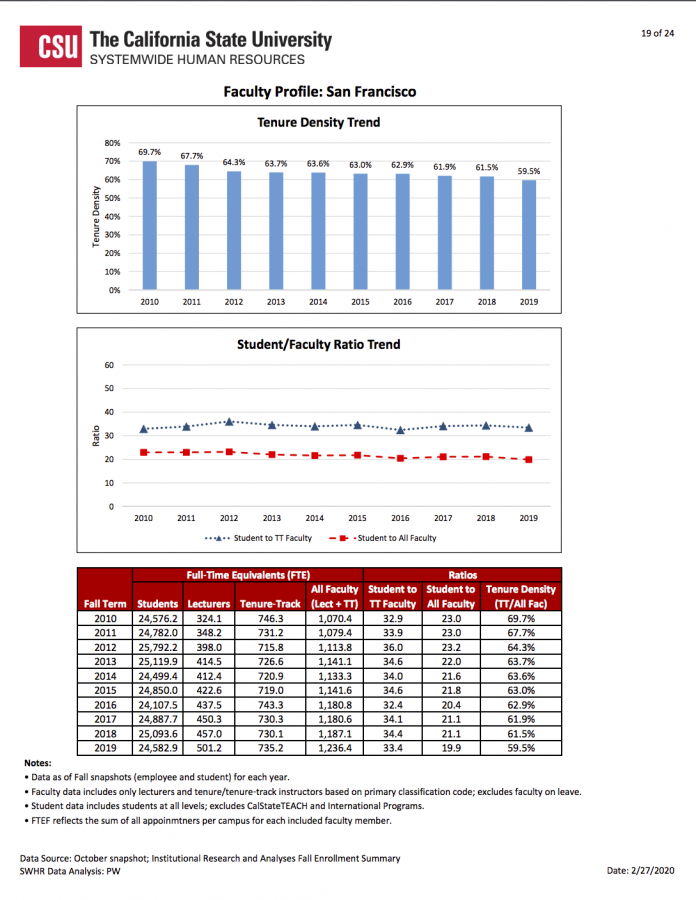 A novel situation for all

CFA asserts that the CSU Office of the Chancellor’s communication is not final and not an official layoff notice.

Martel said while the agreements are there to protect faculty, they are only to be resorted to in worst-case situations as a last option. Martel said since there were few, if any, layoffs in 2008, he doesn’t believe the school is at that point yet. Though layoffs could have grievous consequences for classrooms, Martel said that teachers would continue to do their jobs well so long as they have students.

“The truth is, our teachers are amazing, and they’re going to do a great job. We’re always pushing ourselves past our limits on jobs, so we will do the best we can, but it’s certainly no help from the administration in this regard. It just makes all of our jobs harder.”

Mahoney said this is all new to her too.

“I have to be honest, I have not had to go through layoffs on a CSU campus. This is my third, and we’ve never had to do [layoffs] before,” she said. “So again, I’m going to work extremely hard not to have that happen. I think we can probably muddle along for about a year. But next year will be really rough.”