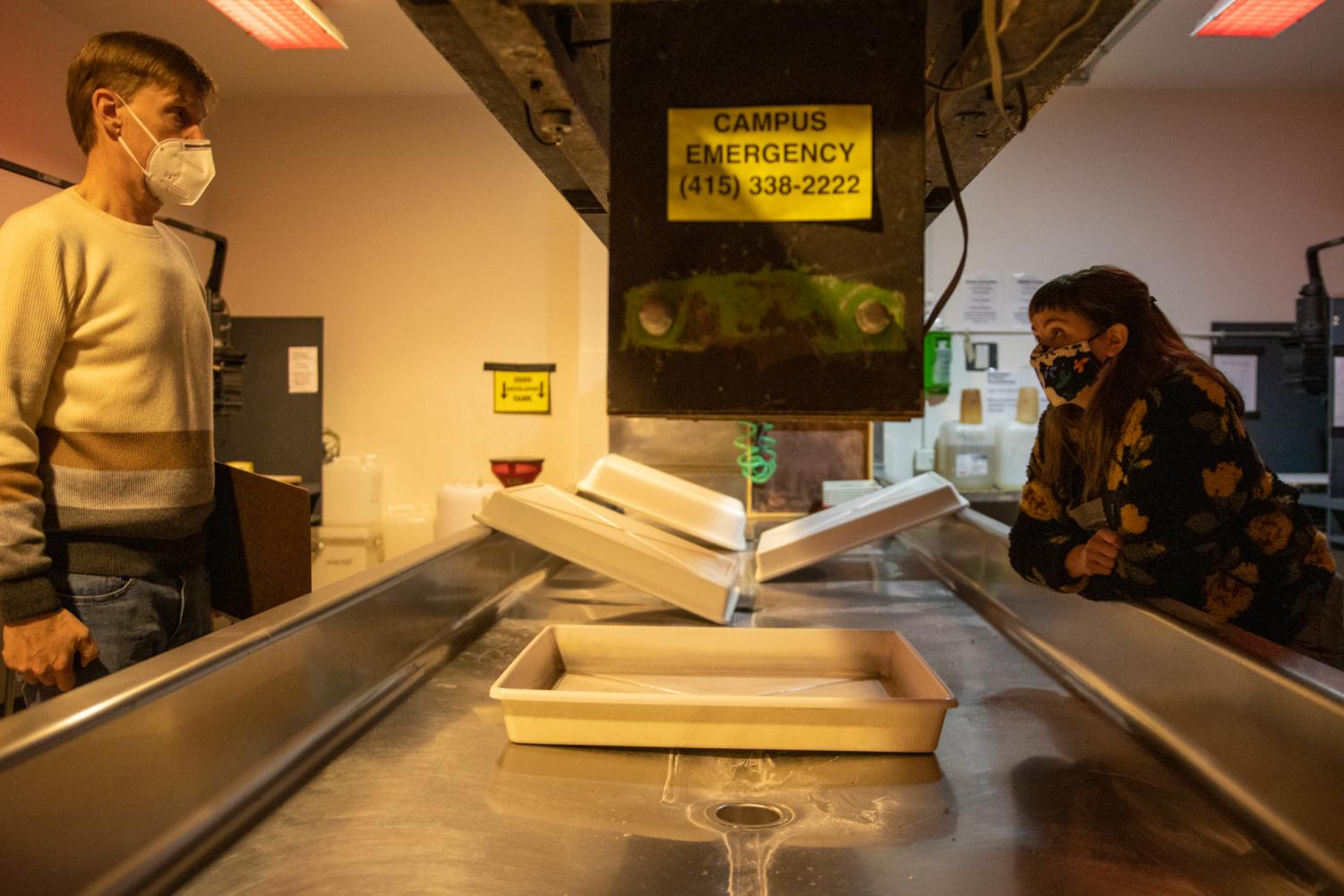 Michael Scott, the associate vice president of Office and Research, and Sponsored Programs, measures the length of each classroom in the Fine Arts Building at SF State. Scott records the new capacity for each room in accordance with the six foot social distancing practice. Instructional Support Technician for Printmaking and Photography Gaelan Spor guides his recording by informing him how the classrooms are run. (Amalia Diaz / Golden Gate Xpress) (Amalia Diaz)

Michael Scott, the associate vice president of Office and Research, and Sponsored Programs, measures the length of each classroom in the Fine Arts Building at SF State. Scott records the new capacity for each room in accordance with the six foot social distancing practice. Instructional Support Technician for Printmaking and Photography Gaelan Spor guides his recording by informing him how the classrooms are run. (Amalia Diaz / Golden Gate Xpress)

The university is committed to getting as many students as possible in classrooms this coming August. In order to do so, SF State must adhere to SFDPH guidelines and work to promote campus safety.

The Fine Arts Building on campus at SF State isn’t where most would consider trying gymnastics, but as Michael Scott, associate vice president for research at SF State, approaches the building, he knows it’s the only solution to the task at hand.

The sculpture labs and darkrooms are the most difficult to measure, he said. They have immovable equipment, such as ceramics throwing wheels, desks and sinks. Maneuvering around these obstacles, Scott has to figure out a way to measure the length and width of the rooms.

“We have to figure out how we can situate students to the maximum to fit as many people in that space as possible at six feet,” Scott explained. “So literally, we went through every room with a tape measure and looked.”

While classrooms can hold up to 50% capacity, students must also still have six feet of distance from their peers in all directions.

For Scott, the phrase “reopening measures” is quite literal.

It’s one of the plethora of tasks Scott and the university must address to ensure a wide return to live instruction in August. Tangled within a web of guidelines, regulations and reliance on other agencies and organizations, all occurring at once rather than in succession, the plans for how much the university can return to pre-pandemic normalcy are mostly dependent on one factor: the pandemic’s severity at the beginning of the 2021-22 academic year.

The most pressing question still exists: Which courses are being offered in person and remotely in the fall?

Departments internally assessed which courses they would like to see in person — based on importance and staff and student comfort, among other factors — and submitted their requests to the respective deans of their colleges on April 16.

Scott and others across the university are now matching courses to rooms — the list is expected to be released on May 10.

While some departments may have specialty rooms designated for their courses, such as ceramics or BECA audio production labs, lecture rooms are typically used by multiple departments.

In the event that there is higher demand for in-person instruction than SF State can supply, a priority list of sorts falls into place. Andrew T. Harris, dean of the College of Liberal and Creative Arts, said that the university is looking to bring back (in no particular order):

SF State’s reopening strategy is coordinated through dialogue with the San Francisco Department of Public Health. Eugene Chelberg, associate vice president for Student Life, touches base with SFDPH and other higher-education institutions through bi-weekly meetings.

Chelberg said SF State was the first higher-education institution to reach out to SFDPH last January, two months before the university went remote.

“‘Is it here yet? Is it worse than the flu, or the same as the flu?’ Those were some of the original questions,” Chelberg said. “So it was early on, and honestly, we were not as worried. Back then, the real question was, especially for international students that were coming back home from their break, we wanted to make sure that those folks felt safe, and hopefully wouldn’t be stigmatized.”

He added that the SFDPH-mandated guidelines were “pretty strict” at the initial onset of the pandemic, but it’s what benefited the university in the long run.

According to SF State data, only thirty-two cases have been reported since they started being recorded in August 2020. Of these 32, none have been transmitted within the dorms themselves.

Within the California State University system, SF State had the ninth-lowest recorded on-campus cases of Covid as of Feb. 24. It had 29 reported cases at the time, compared to San Diego State University’s recorded 654.

For now, the university is planning for the fall using current SFDPH guidelines, but keeping relaxed protocol scenarios in mind for the future. A general rule of thumb for the university to follow is that whatever SFDPH says, goes.

Students have also been allowed to weigh in using surveys and groups that Associated Students leadership participates in. In fact, AS President Andrew Carillo successfully advocated to get the ball rolling on Cesar Chavez Student Center reopening.

Specifics about former and current guidelines remain unavailable to the general public, per California Department of Public Health rules, but administrators at SF State are optimistic that the rules will become more lax as the public gets vaccinated.

According to Mayor London Breed, roughly 80% of San Franciscans are anticipated to have gotten at least one dose of a Covid vaccine by mid-May.

Relaxed rules would mean the ability to up course cap sizes — for example, if SFDPH follows Centers for Disease Control recommendations for three-feet distancing in K-12 classrooms. This is easier to do than optimistically planning and potentially having to backtrack.

All indications are that they’ll be for the better.”

In the semesters since the pandemic began, the university submitted a list of courses it wanted offered in-person to SFDPH, with reasons as to why they should be in person.

The process is a slight game of tug-of-war — SF State advocates for its classes and tries to negotiate with SFDPH, but as always, SFDPH has the final say. Chelberg described the relationship as a partnership in which the city works to keep the university accountable in maintaining campus safety.

“Some of those, like the nursing exams — which I believe are up to three hours — we had to get exemptions from the city department of public health and the city attorney to be able to offer those courses,” Chelberg said. “Then, reassure them how it was that we were going to keep those spaces clean and disinfected, and that everybody in them was going to be properly wearing face covering or face shields … So yeah, it’s pretty detailed.”

Most personal protective equipment and installed equipment, such as plexiglass barriers and Merv 13 ventilators, are located in the administration building, where most in-person campus activity takes place now.

“It’s much easier [finding PPE] now than it was last summer,” Scott said. “I will tell you, I was the one doing all the purchasing last summer, and just finding a pack of Clorox wipes was next to impossible. Now, things are relatively easy. Now, it’s more about getting the volume and moving it around.”

As a member of the Budget & Logistics workgroup, Chief Financial Officer of Admin & Finance Jeff Wilson said that the goal is to install all PPE, equipment and signage by the third week of August, right before faculty and students begin returning.

“I can’t think of anything we’ve attempted to order in the past six months that we haven’t been able to get pretty quickly, whether it be plexiglass or gloves, or hand sanitizer, or, you know, it’s all readily available,” Wilson said.

Reopening-related costs are paid for through federal funding provided by President Joe Biden’s American Rescue Plan. The university received $83 million — half is for direct assistance to students, and half is for pandemic-incurred costs such as PPE.

The need for equipment is coordinated between Scott and each building’s respective building coordinator. Scott acquires and sends equipment to the coordinators, who set up the materials throughout their buildings. One goal is to have three sanitizing dispensers on each building’s floor.

Coordinating classes is also something happening at the administrative level. This includes procedures such as allowing “downtime” for classrooms to air out while janitorial staff sanitizes — SFDPH originally required an hour of sanitization; this time frame is now relaxed — and staggering classroom start and end times to avoid crowded hallways.

Lahey said that Scott also proposed the idea of student ambassadors, who would greet students at building entrances to provide PPE and work to prevent crowded spaces.

SF State’s location also makes it subject to weather patterns such as rain, cold weather and poor air quality brought about during fire season. This makes the campus heavily reliant on indoor spacing, versus CSU campuses in Southern California, which can utilize outdoor spaces more.

Spaces such as Cesar Chavez, the library and Mashouf Wellness Center all have their own respective reopening plans that are being worked on.

The university’s goal is to get as many people to return to campus in person; however, President Mahoney acknowledges that the fall will act as a transitory semester for all members of the campus community.

Hyflex courses — courses that allow for students to participate in a course either remotely or in-person — are not possible for the university to technologically support.

Mahoney said that students will be able to take the courses that are most accessible and convenient to them, whether it be fully online, in person or a mix of both. However, she acknowledged that it is highly unlikely for a student to have a fully in-person schedule.