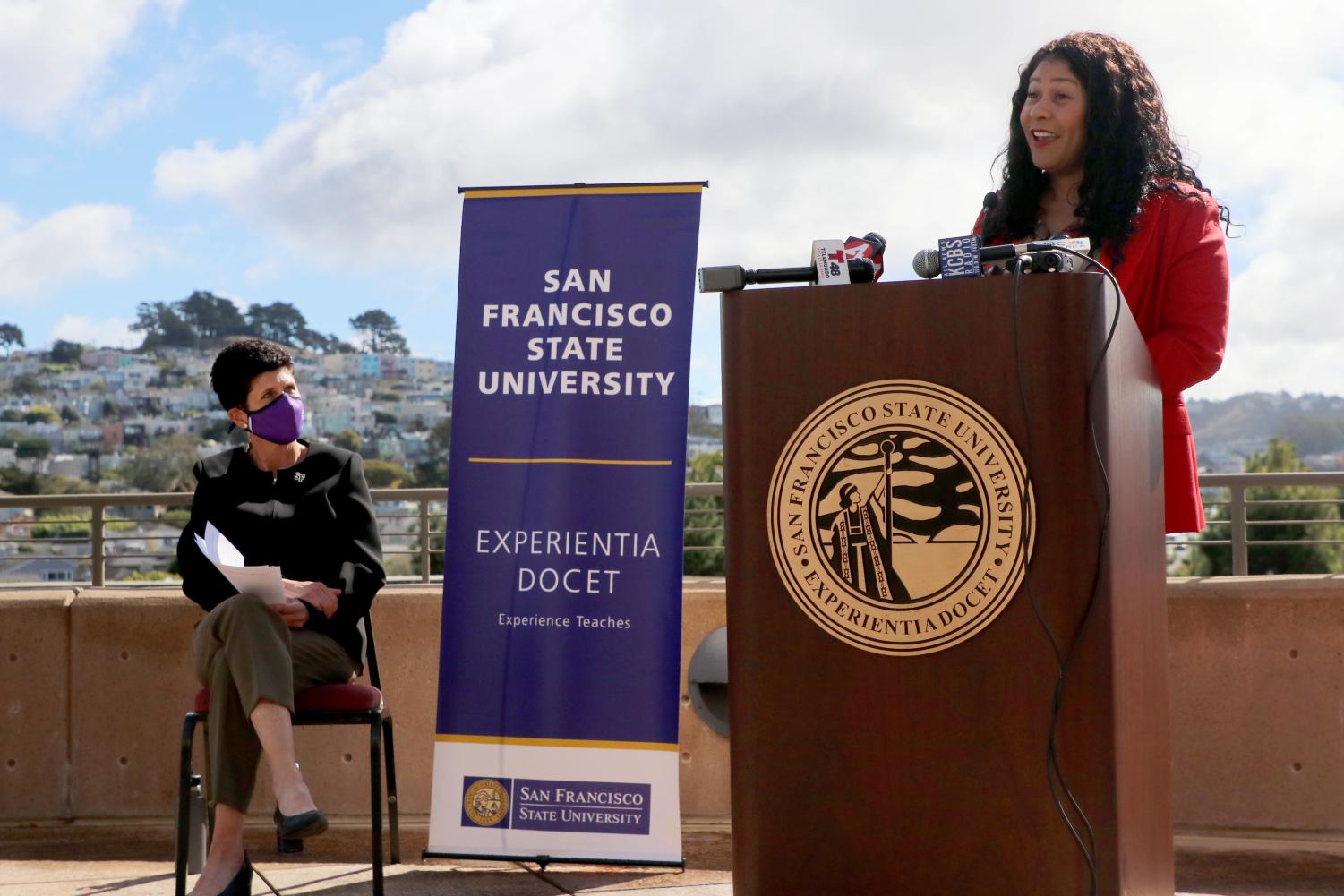 SF State President Lynn Mahoney and Mayor London Breed announce that SF State is offering full scholarships to 10 eligible youth to encourage more students to get vaccinated, at the fifth floor patio of the Administration Building on Oct. 18, 2021. ‘I can’t think of a better incentive than that, in order to be a part of what I think is an incredible institution,’ Breed said. (Sabita Shrestha / Golden Gate Xpress) (Sabita Shrestha)

SF State President Lynn Mahoney and Mayor London Breed announce that SF State is offering full scholarships to 10 eligible youth to encourage more students to get vaccinated, at the fifth floor patio of the Administration Building on Oct. 18, 2021. ‘I can’t think of a better incentive than that, in order to be a part of what I think is an incredible institution,’ Breed said. (Sabita Shrestha / Golden Gate Xpress)

SF State to offer full tuition to some future students, if vaccinated

The move, which SF State President Lynn Mahoney came up with, is a collaborative effort with the San Francisco Department of Public Health and the Mayor’s Office to get children ages 12 to 17 fully vaccinated.

SF State President Lynn Mahoney, Mayor London Breed and the deputy director for the San Francisco Department of Public Health announced on Monday an incentive for prospective students — four years of free tuition for 10 students, if vaccinated, from ages 12 to 17.

Tuition would be paid for through the SF State Foundation’s Board of Directors, a philanthropic branch of the university, which seeks funding for SF State.

As of Sunday, 90% of San Franciscans in the targeted age range have received at least one shot.

“What we want to do is get our institutions of higher learning, as well as the school district and many of our schools that are open — we want them to stay open,” Breed said at the press conference. “And we want the teachers, we want the administrators, we want the janitors and all of the folks who work in those schools, and our kids, to be safe.”

To be eligible for the lottery, 12 to 17 year olds must be San Francisco residents and have at least one dose of the Pfizer vaccine — the only vaccine currently emergency authorized for children. Those eligible must then submit proof at one of six vaccination sites, on specific dates. These sites include:

Children have until Nov. 13 to get vaccinated and enter, and winners will be announced the week of Nov. 22. SF State employees, their children and spouses are not eligible to enter.

“A lot of them are actually school sites, so we know that 12 to 17 year olds will go there,” SFDPH Deputy Director Naveena Bobba said to Xpress. “We wanted to have a diverse array of geographic places within the city that people could go to.”

Mahoney said that there is the potential for similar opportunities down the road for transfer students and children ages 5 to 12. The former demographic could target ages 25 to 34, the least vaccinated group at 76%, while the latter is dependent on if and when the Food and Drug Administration authorizes vaccines for that age bracket.

On Friday, eight Bay Area counties, including San Francisco, set criteria for lifting their mask mandates. San Francisco must reach 80% of its population fully vaccinated to do so. Currently, it sits at 75%.

Bobba said that it is unlikely that solely vaccinating this age range will allow the city to remove its mask mandate. She told Xpress that reaching that threshold would take place once children 5 to 12 are able to get vaccinated. Children under 18 make up 13% of the city’s population — 8% are children nine and under, and 7% are 10 to 19.

The idea for this opportunity originated with Mahoney, who said it arose after reading an article concerning a mid-western university.

The University of Kansas announced an incentive plan to encourage students to get vaccinated on Aug. 13, with prizes like free tuition for a semester and cash prizes. On Aug. 18th, Missouri State University offered prizes valued between $3,000 to $7,000, including one semester of paid student housing and a full-year meal plan.

SF State’s plan has been in fruition since the summer, with positive responses from the SF State Foundation, Board of Supervisors and the Mayor’s Office.

“President Mahoney has been amazing in working with us and working with the city, and trying to build that grid so that San Francisco State is not just out here on an island, but they are part of the fabric of San Francisco,” Breed told Xpress.

The move also seeks to bolster interest in local higher education institutions. In an interview with Xpress, Mahoney cited the steep decline in enrollment in community college enrollment. Community colleges in California lost about 250,000 students, from Fall 2019 to Fall 2020.

While the California State University system has remained relatively stable — the CSU gained about 3,000 students in the same timespan — SF State remained an outlier in that general trend.

SF State lost roughly 2,000 students from its Fall 2019 and Fall 2020 semesters. Declining enrollment brought on by the pandemic led to the layoff of 72 staff members last fall. The university’s $41 million deficit has since been restored through an increase in state funding and COVID-related assistance, with 24 of the laid off staff members have been able to return.

The November lottery also seeks to address the educational inequity exacerbated through the pandemic. Mahoney said that zip codes of where the death tolls and cases were higher coincides with areas of San Francisco that are historically underrepresented and underserved, in both education and health — particularly affecting Black and Latino students.

“[The initiative] is a great way to help the public health goals but also really keep college on students’ radars,” she said. “This is where they need to be. So, it was kind of just a win-win and a good thing to do for the city.”

Editor’s note: This story was updated on Tuesday morning, following a response email from the university, to reflect the number of staff members that have been brought back since being laid off. As of August, 21 staff members were brought back. SF State confirmed that three more have been hired since.