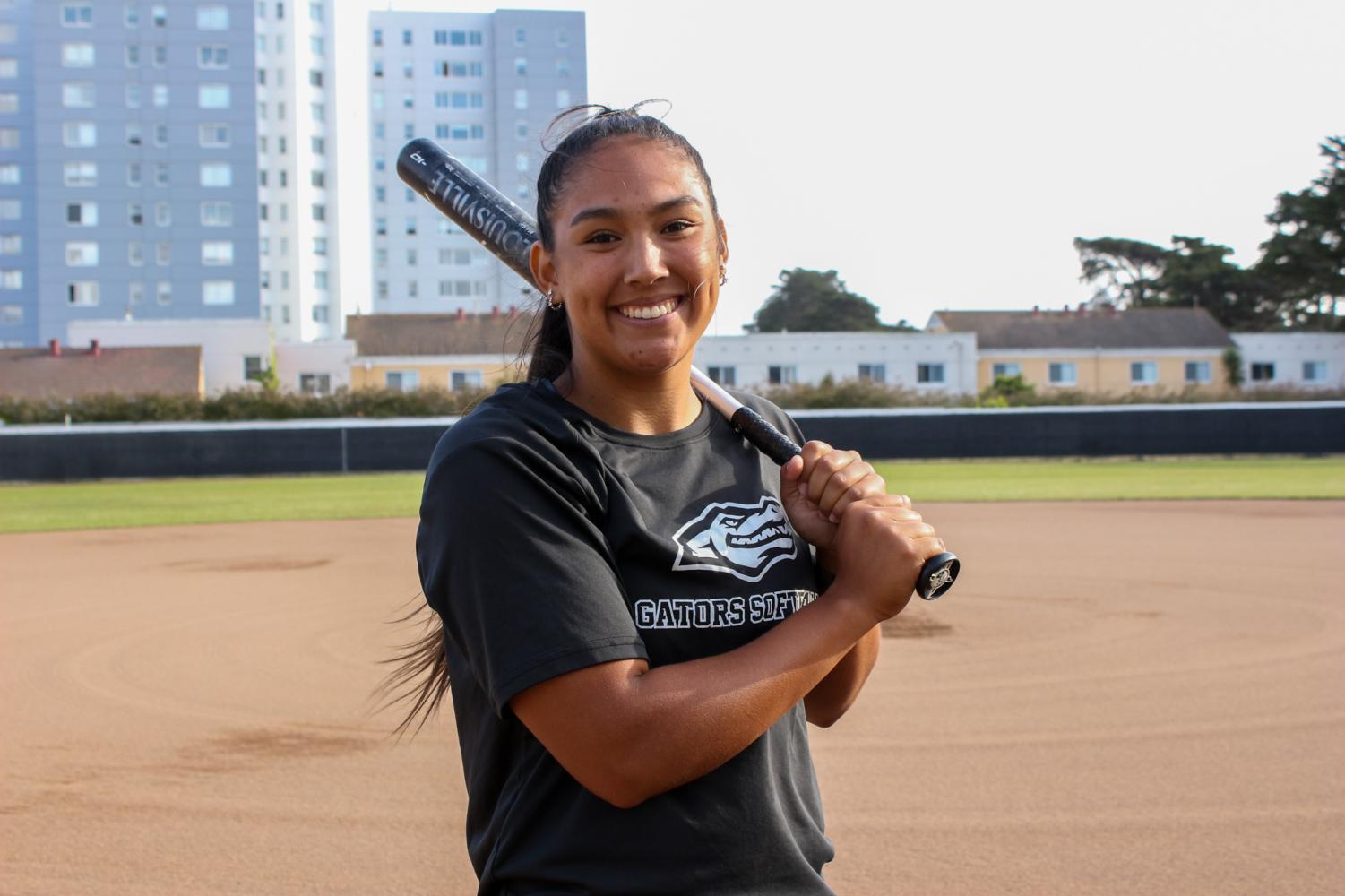 Vallejos poses for a portrait on the SF State softball field on April 21. Vallejos was named California Collegiate Athletic Association player of the week for the second time in her career. (Paris Galarza / Golden Gate Xpress) (Paris Galarza)

Vallejos poses for a portrait on the SF State softball field on April 21. Vallejos was named California Collegiate Athletic Association player of the week for the second time in her career. (Paris Galarza / Golden Gate Xpress)

In her senior year, Vallejos was atop the conference in many statistical categories. Now, she will move on to a Nursing career.

SF State softball player Brylynn Vallejos wasn’t known for stealing bases before becoming a Gator. Two and a half seasons later, she holds the school’s record for most stolen bases.

Vallejos would have had the chance to entrench her name further in SF State’s record books if not for missing one and a half seasons due to COVID-19.

She said it was difficult to work out and condition herself during the pandemic, when the team wasn’t playing in games.

“I forgot and lost what I liked about softball,” she said. “I lost a lot of motivation during COVID, but finally getting back and being able to touch the field kind of rekindled my love for the game.”

Her reawakened passion resulted in an impressive individual season in her senior year. Vallejos finished the season with a .408 batting average with 10 home runs and 37 stolen bases, placing her among the leaders in various categories in the California Collegiate Athletic Association.

In the CCAA, she tied for third in batting average, first in runs scored, tied first in home runs, second in stolen bases and second in slugging percentage.

In addition to breaking the school record for career stolen bases, which previously was at 88, Vallejos finished her Gator’s career with the highest batting average in program history by a wide margin. Her career average of .426 surpassed the previous record of .352 and her 10 home runs this season was tied for the second most in a season in program history.

Defensively, Vallejos makes an impact in the outfield too. During her sophomore year at SF State, she made a game-saving catch that her teammates like infielder Halle Nugent will never forget witnessing.

“We were playing Sonoma State and we were up by one run,” Nugent said. “She robbed a home run over the fence, just jumped up and grabbed it. She didn’t even know she caught it at first and everybody was running out to her. It was a great moment.”

Her work ethic helped lead her to the player she is beyond her athletic ability. According to teammates and coaches, she leads by example and consistently puts in extra work.

“She’s one of those people that encourages you to do your best and is always rooting for your success aside from her own,” Nugent said. “She changes the camaraderie of the team, she makes the environment a lot more fun and knows when to be serious, when to have more fun.”

Infielder Lehua DeLeon said Vallejos breeds confidence in her teammates and always encourages them if something doesn’t go their way.

“She would always be one of the loudest ones to cheer on every teammate,” DeLeon said. “She has inspired me to keep going and to have confidence within myself. She’s basically like a big sister to me.”

Vallejos was introduced to the sport when she started playing T-ball at five years old. Her love for the sport grew in middle school when she got recruited. That’s when she knew she’d want to play softball at the college level.

Vallejos said she’s gained a lot of life skills from playing softball that would help her in the future and that those skills are a big reason she loves the sport, along with her desire to compete and win.

“All the things that I learned life skill-wise, growing up playing softball, you don’t realize it until you’re older,” she said. “To get a job, it’s really great to put on your resume that you know how to work well with others, that you have a hard work ethic.”

The Gators finished the regular season with a 23-30. With her senior season coming to an end, Vallejos will be moving on to the next chapter in her life: Nursing.

“As a coach, you’d love to have a team full of kids like Brylynn,” said Alicia Reid, head coach of the softball team. “She has a tremendous work ethic athletically, but also in the classroom. She does all the things you don’t even need to ask for. That work ethic is definitely a part of her and is going to allow her to do tremendous things professionally, post-San Francisco life.”