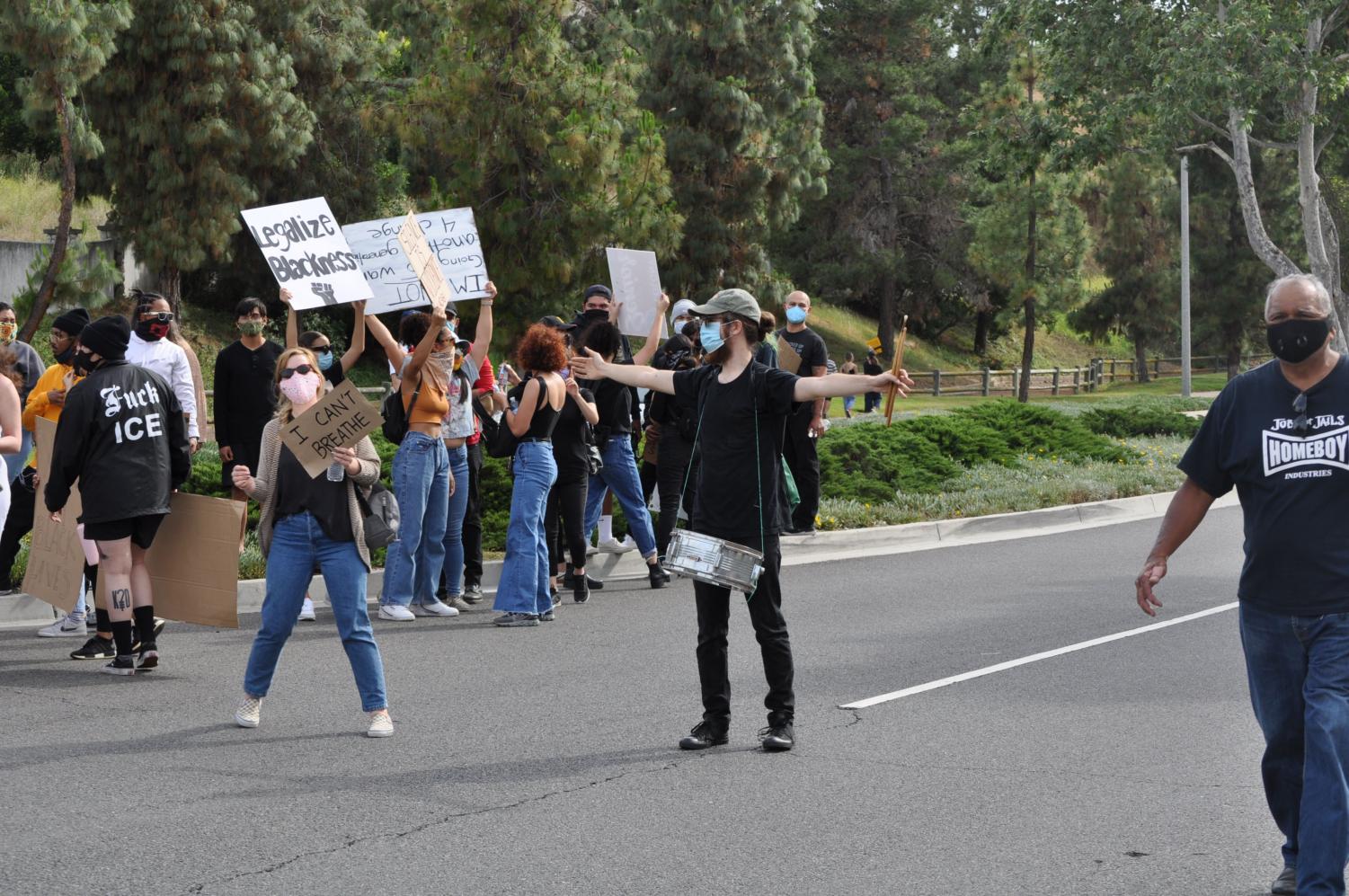 An unidentified man, who wished to be referred to as John, attempted to escalate Monday’s protest, and after standing in the middle of Amar Road he led a group of protestors to the Walnut Sherrif’s Department. (Chris Ramirez / Golden Gate Xpress) (Chris Ramirez)

An unidentified man, who wished to be referred to as John, attempted to escalate Monday’s protest, and after standing in the middle of Amar Road he led a group of protestors to the Walnut Sherrif’s Department. (Chris Ramirez / Golden Gate Xpress)

Tensions dissolve minutes before curfew at protest in Walnut, California

On Monday afternoon, the sidewalks at the intersection of Amar Road and Grand Avenue were packed with over 100 residents, from Walnut, California and neighboring cities, who showed up to protest police brutality and stand in support of George Floyd and the Black Lives Matter (BLM) movement. The protest was one of several in the San Gabriel Valley (SGV), all part of a larger call to protest referred to as “SGV Speaks.”

Dozens of signs spreading messages of frustration toward law enforcement and solidarity with Black individuals across the nation filled the air across the street from Mt. San Antonio College. Among the signs were messages such as, “Asian Allies for BLM,” “Latinos for Black Lives” and “Filipina for Black Lives.”

The protest was scheduled to begin at 2:00 p.m. and end at 5:00 p.m. in order to comply with Los Angeles County’s 6:00 p.m. curfew. Once the event officially ended, however, a smaller group of protestors split from the original event and marched down Grand Avenue, contrary to the demands of organizer Nadjah Smith. This group, led by a man who refused to disclose his name, stopped directly opposite the Walnut Sheriff’s Station and was prepared to defy the curfew, but dissolved five minutes prior.

“I think of myself as using my privilege as a White person to empower, to amplify people of color voices,” said the man, who wished to be identified as John. He continued, “You can think of this as a totally separate [protest]… I am listening to [a] few people of color here; when they really tell me to stop, I’m going to stop, and I’m going to stand with them at the same time. There are militant people of color, Black and Brown people who are militants as opposed to peaceful protesters who want to show a little bit of guts, who want to show a little bit of teeth and they want to take to the streets.”

The city of Walnut, California, located 20 miles east of Los Angeles, is not a Black-majority city. The Southern California Association of Governments reported 63.6% of its residents as Asian in 2018, with Hispanics accounting for 20.4%, “Non-Hispanic White” making up 10.18% and “Non-Hispanic Black” composing 2.9% of its 30,457-resident population. The contrast of Black representation with other demographics in Walnut, in addition to Smith’s dispute with John, not only highlights the difference of intentions when people protest, but also raises the issue of whether those who participated in Monday’s protest were elevating Black voices or taking away from them.

Paul Kievel, writer, activist and founder of the Oakland Men’s Project, outlines specifically in his book “Uprooting Racism: How White People Can Work for Social Justice” how to be an ally for people of color. Kievel’s guidelines include standing behind the leadership of people of color and not interrupting them when they are speaking.

However, participants at Monday’s event had different interpretations on how exactly to do so.

“If you were there for the right reasons, you have the right motives, being peaceful, you know, in a same state of mind of really being there because you have a genuine concern and you genuinely want to support the Black community right now,” said protestor Gabriella Minassian. “It doesn’t matter. It doesn’t matter if it’s Asian American friends or if it’s a White man, it doesn’t matter if I was in the front of it, because if the genuinity is there, then that has you know somebody that you can trust in. You can see it and hear it.”

Minassian identifies as Hispanic and Middle Eastern. She attended the protest with her best friend, Taylor Williams, and held a sign that read “My Best Friend’s Life Matters.” She noted that John did have a tendency to wander in the middle of the street and attempted to block traffic, enticing others to join him and disregard directions from other protestors. While she appreciated the intentions of everyone trying to take charge, she applauded those who were wholeheartedly supportive without taking action.

“White women were actually the ones starting these chants, and you could hear it in their voices. They were speaking for everybody, they cared for everybody they love. And they were really there to be supportive, but they weren’t trying to steer everybody in their own direction,” Minassian said.

Occurrences of non-Black demonstrators to this have also popped up in larger cities’ protests. In Pittsburgh, a White man smashed police vehicle windows, while a White woman tagged a Starbucks against the wishes of the Black women recording her. “Y’all doing that for us, and we didn’t ask y’all to do that,” the woman said, concerned the vandalism would be blamed on Black protestors.

Like Minassian, Nelson Nwaukwa, from neighboring city Diamond Bar, dismissed John’s actions as “abusing” the protest and ignoring Smith’s guidelines for her organized event. He referred to John as opportunistic, using the event to stir up trouble.

“I don’t really see, like, you coming out to help these people and you won’t even give them a chance to explain themselves, what they’re actually doing as in it’s kind of disrespectful for you to just come,” Nwaukwa said.

Nwaukwa mentioned that it was nice having the Asian community supporting a Black issue and how minority groups often pull through for each other when necessary.

“Obviously, it is a Black issue, but it’s not just a Black issue, it’s a humanity issue … It was just really nice to see that [support], especially all the Asian lives for [BLM], because they were going through some pretty tough stuff too when COVID-19 was first starting out. It’s good to see that they’re supporting us in times we need, and [we] support them in their times of need,” he said.

Others felt different. Trelani Waters, alumnus of Mt. San Antonio College and former track athlete, felt the need to take the protesting further than Smith’s original protest. He joined John and was part of the group that relocated at the sheriff’s department. He also expressed frustration toward law enforcement, recalling that the sheriffs did not kneel with the protestors despite the protestors’ invitation to do so.

Waters moved from San Diego to Walnut five years ago to attend Mt. San Antonio College. Waters said he is proud to live in the city and believes Walnut doesn’t have a racism problem, and he was glad to see so many people of different backgrounds protesting and being involved. Both Waters and Nwaukwa do not condone looting and violence, but see it as justified and a result of ongoing racism in the country.

Another protest showing support for BLM is scheduled for Thursday at 1 p.m. in Diamond Bar.