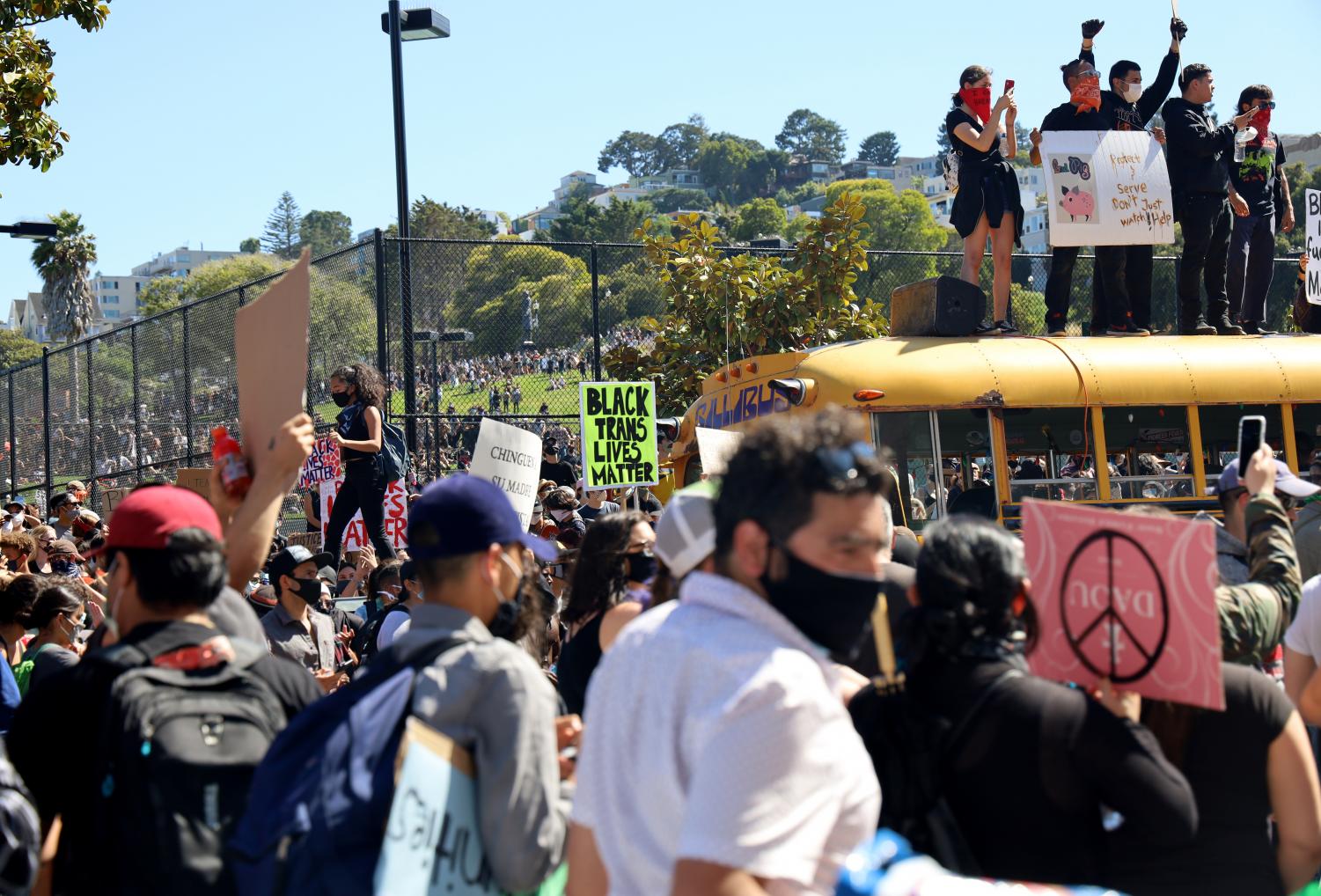 A crowd of over 12,000 protesters looked toward Mission High School as 17-year-old Simone Jacques stood and addressed the crowd.

The protesters, who were packed from the steps of Mission High School all the way into Dolores Park, cheered as they held signs such as “Black Lives Matter” and “ACAB” (All Cops Are Bad).

Jacques organized the protest, which had no reported incidents of violence, with the help of her friends through an Instagram account named NoJusticeNoPeaceSF. In one week’s time, the account gathered over 15,000 followers from all across the Bay Area.

In a cross-cultural display of support for one another, members from the Latin performing arts community attended the protest.

Danzantes’s, or Mesoamerica dancers, displayed their support with a smoke-filled blessing, which lingered through the crowd after they performed a ritual dance. After the performance Jacques spoke about the purpose of putting together a peaceful protest.

“We are here to acknowledge the black people who built this country against their will. The black women who birthed this country. The reparations we still have to take – not receive,” Jacques said. “And all the brown and especially black bodies who have been murdered at the hands of police and white supremacy.The names we know and the names we’ll never know.”

Other organizers spoke about dismantling the system, ending capitalism and coming together in unity. Sabrina McFarland read a poem about her cousin who was killed in a police-related incident.

“I awake to a country that reeks of black death. There’s never enough time for me to catch my breath before the next hashtag surfaces,” McFarland recited.

The Danzantes led the march in the beds of trucks playing music as protesters followed after the organizers finished speaking. Protesters chanted “Say their name” and responded with “George Floyd” and “Breonna Taylor.”
Others gathered for the protest contributed to the demonstration by making their own signs and helping pass water bottles. Castro and Mission residents waved with their families through the window to protesters walking by.

The donations from residents came by the dozens. Boxes of snacks, cases of water bottles, sunscreen, masks and first-aid kits were passed around freely to keep protesters safe and hydrated.

Cheeko Wells, a member of the Street Violence Intervention Program, volunteered to help with crowd control.

“They [organizers] had reached out to our organization, and I have several of my team members out here to make sure everything goes as smoothly as can,” Wells said. “What I love is a lot of young folks came out and donated what they can. It was so beautiful and powerful.”

Volunteer UCSF medics were on standby for protesters in need of any medical help. A volunteer wanted to remain anonymous to keep their views separate from an institution.

“As healthcare providers, we have to acknowledge all the ways that our patients are put in danger,” the medic said. “There’s nothing more than the fact that cops kill people.”

The Instagram flyer stated that the peaceful protest was set to start at Mission High School and end at the San Francisco Police Department Mission Station located at the corner of 17th and Valencia Streets. Jacques live-posted on Instagram a change in route to The Hall of Justice located at 850 Bryant while demonstrators peacefully gathered around her at the Mission police station.

Jerlayah Meriday, a protester, said she was protesting for her little sister and saw the importance of the youth getting involved.

“It’s really important because they’re our future. These will be our next politicians, these will be the people who will be in office,” Meriday said.

Jacques said in her last statement to the crowd that this protest is only the beginning.