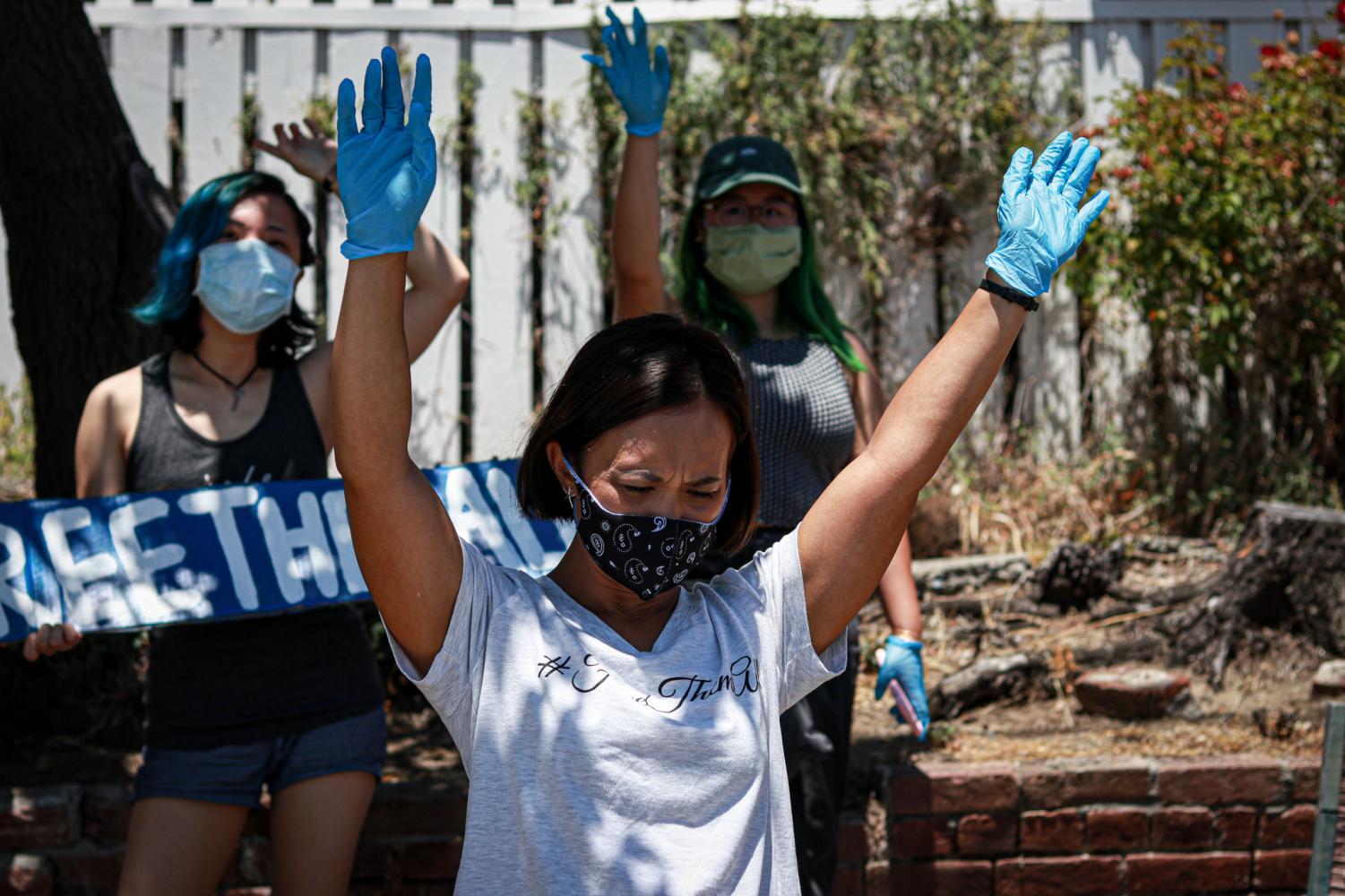 ‘Free them all’ chant protestors outside of San Quentin State Prison

A protest hosted by the Ella Baker Center for Human Rights was held at the San Quentin State Prison on Sunday. Participants gathered in front of the historic penitentiary’s guarded fence, and many advocated for the release of inmates, as well as the end of inmate transfers into the facility, which has purportedly led to the outbreak of COVID-19 within.

There are currently over 1,000 cases reported at San Quentin, according to the California Department of Corrections and Rehabilitation. Protestors also claim there was a death at San Quentin that has not been reported and that, with the number of cases on the rise, there has been a lack of resources and facilities for the people who have tested positive for COVID-19.

“There is not enough medical care and medical treatment in the city of Marin, let alone inside this prison to treat the number of people who are becoming positive with COVID-19,” said Isa Borgeson, a protestor who has a loved one in the prison. “There’s just too many folks who are in prison right now. We need mass releases of folks in order to protect our people during a global pandemic.”

The protesters in attendance all wore masks, exercised physical distancing and chanted slogans in support of the people in the prison.

Borgeson said she believes that officers aren’t taking proper precautions to prevent the spread of the virus amongst inmates.

“There’s correctional officers who are working in areas with known COVID-19 cases, then going to parts of the prison with no COVID-19 cases,” she said. “People who are testing positive are getting thrown into the hole or going into solitary confinement.”

As transfers in and out of San Quentin continue in an effort to try and limit the spread of COVID-19 in jails and prisons, about 200 people were transferred from the Chino State Prison in an attempt to prevent the spread of the virus according to the San Francisco Chronicle.

But it seems the efforts to contain the virus have been unsuccessful. In addition to the 1,000 cases reported by the CDRC, 112 cases of COVID-19 have been reported among correctional officers, with six returning to work.

“All I know is from what I’ve heard about folks getting solitary confinement not getting treatment, and

now its solitary confinement is filled so folks are getting sent back into their prison cells with someone who could be negative for COVID19 and they’re just going back into the same so waiting for the result,” said Anoop Prasad, media coordinator for the protest and senior staff attorney at Asian Americans Advancing Justice.

Some protestors on Sunday were also there to detest the transferring of incarcerated individuals into Immigration and Customs Enforcement detention centers. Ny Nourn, one of the organizers of the protest, was released last Friday from an ICE detention facility and given a pardon on her deportation by Gov. Gavin Newsom.

“It took a devastating physical and mental toll on me,” Nourn said. “ICE detention centers are expanding and local jails and state prisons are continually helping ICE to fill up these bad spaces; just majority, about 70% of ICE transfers are from state prison and jail.”

In a pair of lawsuits filed by the American Civil Liberties Union against the state of California, transfers comprise the “primary source of ICE’s new bookings.”

“We knew that CDCR is continuing to transport people to ICE detention centers. There are outbreaks happening, and the ICE detention centers do these transfers as well,” Prasad said. ”So very quickly, folks came together and said we needed to do something, and so came to San Quentin today.”

According to an NPR article on Monday, detainees are in environments “where many people are sick, unable to isolate, and denied proper medical care.”

“Never would I imagine as a survivor of domestic violence, this legal system would

criminalize survivors like us,” said Nourn. “Folks that I met inside … I realized that they were just like me, that we all share the same background, the same story, and that people that are locked up are people of color, are survivors who have survived so many forms of trauma.”

The CDCR released a plan yesterday that will allow eligible incarcerated individuals “to be released to parole or probation supervision prior to their original release date.” The proposal will help in efforts to decrease state prison populations and prevent future outbreaks of COVID-19.